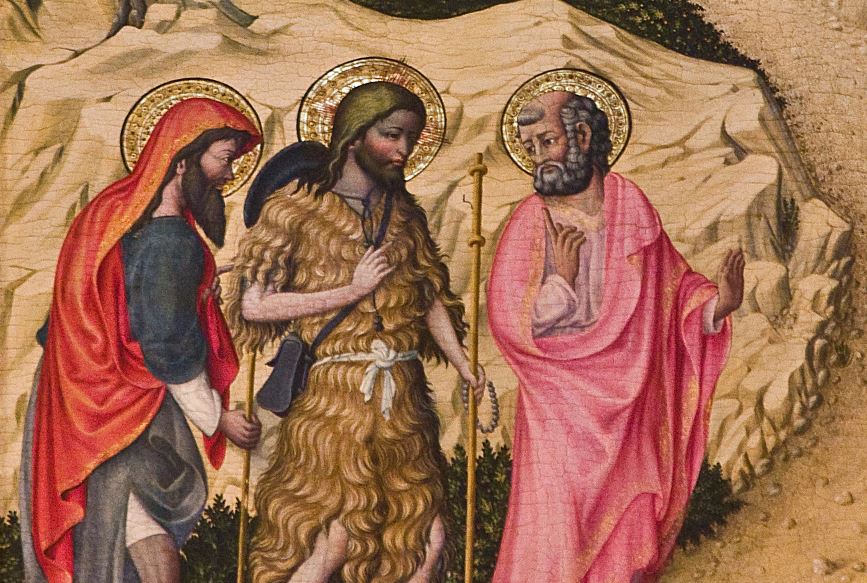 The Emmaus story is one of my favorites. Part of that, as I mentioned the last time this passage came up, is because I think it is Luke’s great promise about Christian worship. Think about the four-part movement of the narrative: 1) the two travelers are met on the road, 2) have the scriptures opened, 3) share in a meal that reveals the identity and presence of Christ, 4) and then are sent to share and live the good news. That strikes me as remarkably parallel to the classic Christian pattern of worship involving gathering, word, meal, and sending. So just as John closes his gospel with words of Jesus addressed to Thomas that are really addressed to his community and to us, so here Luke tells us a story about two disciples that is really a story that makes a promise to those reading the gospel then and now: in Christian worship you will be encountered by the risen Christ.

So that’s one reason I love this story. But I also love it because of four words that pop up right in the middle of this story, four words that I think are among the most heartbreaking and realistic in Scripture: “But we had hoped …”

“But we had hoped …” So much is said in those four words, as they speak of a future that is not to be, a dream that created energy and enthusiasm but did not materialize, a promise that created faith that proved to be false. It speaks of a future that is closed off, now irrelevant, dead. And there are few things more tragic than a dead future. Once challenged to write a short-story in six words, Ernest Hemingway supposedly replied by penning on a napkin: “For Sale: Baby shoes, never used.” It’s not just the tragedy of what happened that hurts, but the gaping hole of all that could have happened but won’t.

“But we had hoped …” I love those heartbreaking words not because I enjoy wallowing in dark or sentimental emotions, but because they ring true to me. They are not the only truth, of course; there is much in this life that is beautiful, daring, confident, inspiring, and more, all of which deserves our gratitude. But there is also disappointment, heartbreak, and failure. And all too often we tend to gloss over this in church.

Or if not gloss over it, at least feel the pressure to move by it too quickly toward some kind of resolution, fleeing the cross-like experiences of life for the promise of resurrection. And not only in church, but also in daily life. A friend shares the news of a death of his sister, and we sympathize for a moment before changing the topic. Or a colleague shares her disappointment at not getting a promotion, and we remind her that at least she has a job. Or we see an acquaintance we know has just gone through a dreadful loss, and we avoid him or her altogether because we just don’t know what to say. We don’t mean to be callous or insensitive, we are just at such a loss with … loss. We feel inadequate to the task of confronting the darkness of our lives and this world and so flee to the light in denial.

In the church this penchant is almost pernicious. And perhaps that’s somewhat understandable. We are, after all, people of the resurrection. And so when reading this story we often hurry to the burning hearts part of the narrative, celebrating with the disciples their encounter with the Risen Christ.

Can we be a place that welcomes broken hearts, Working Preacher? That sounds easier than I think it is. Because I’m not talking about treating our broken hearts as a means to an end — you know, let’s acknowledge the cross so that we can get on to the resurrection. Rather, I’m talking about recognizing that part and parcel of being human is being broken. And it is to these heartbroken disciples — in today’s reading and in this Sunday’s worship — that the Risen Christ comes, walking along with us on the road, astonished that we don’t see as we ought, teaching us the Scriptures that we may understand, sharing his presence through bread and wine, and granting burning hearts that prompt us back into the world.

But all of that starts with broken hearts. And our job as preachers, as I see it, is not to get people to admit their darkness or own their hurt. The ones who are not ready to do so won’t be persuaded by you, and the ones who carry this with them daily, like a snail carries its shell, don’t need to be convinced, only invited and allowed. Invited and allowed to share their disappointment that the cancer returned, the addiction wasn’t overcome, the beloved died, the lover betrayed, the child walked away, the job didn’t materialize, the congregation disappointed, the family hurt instead of helped … and so on and so on.

They only need to be invited and allowed to grieve a future that will never be … in order that they may possibly hear and receive the future God has created and prepared for them … when they are ready to hear … and as they are able.

Each week, Working Preacher, we are called to tell the two truths about broken hearts and burning hearts, creating through our words space so that our people may know and be known, trust and be trusted, listen and then speak. Given our penchant as Easter people to sound the burning hearts of resurrection, perhaps this week we might make a little extra room for the brokenhearted, trusting the Spirit to set those hearts afire in her own good time.

Blessings on your proclamation, Working Preacher, for you are an instrument through which the Spirit is at work and I give God thanks for your ministry.

PS: We are just starting our spring fund appeal to continue to keep these resources available to you, Working Preacher. If you value this site, including this weekly letter, please consider supporting our work and help us “keep Working Preacher” working for you. Thanks! -D