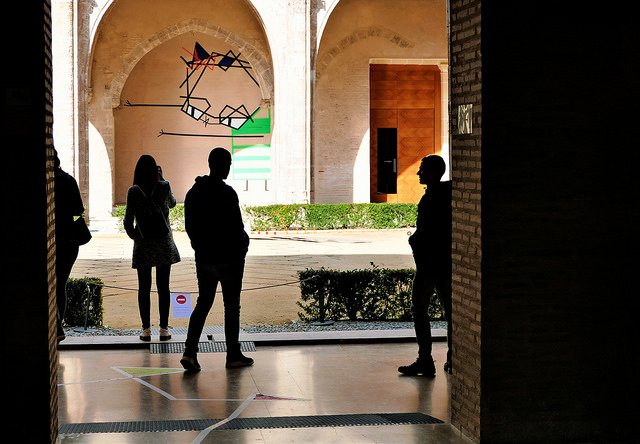 Something different this week. I preached on this text a few weeks ago at a continuing education event in Colorado talking about living with our embodied God. I am preaching in the Chapel of the Incarnation at Luther Seminary on Wednesday, on this text. So, I decided that this week, I would share my sermon. It has changed since a few weeks ago. It will change again before Wednesday. And each of you will preach a completely different sermon. The gift of the living Word.

One of these things is not like the other.

And this is where we should just stop. Just stop right now. Once we start feeling ourselves moving from the surprise of “not the right time” to our feeble attempts to understand “one of these things is not like the other.” Just stop.

But we don’t. Explanations ensue. Well, of course Jesus didn’t actually do this twice, there is a logical reason for this after all. Or maybe he did. Could it be that the Gospel writers might have heard different stories?

Or, John, the Evangelist, moves it because he wants to show us that, tell us that, help us understand that … blah, blah, blah

And suddenly, predictably, we’ve allowed God’s revelation to be little more than our attempts to ease our own angst when it comes to the realization that Gospel is not history and grace is not fact.

This is what we do. We are sooo good at this. Experts at it, in fact. No wonder people don’t want to come to church. Instead of experiencing an experience of God we explain it. And in doing so, we explain away the effect, the impact. We explain away God’s presence as a glitch in testimony. We explain away a God who insists on knowing us and being known by second-guessing some assumed accuracy of the four evangelists.

But I get it. After all, who would believe us when we say that the true I AM shows up in our lives.

So, why Jesus’ body here and now? “He was speaking of the temple of his body.” And then no body talk until we get to the crucifixion and resurrection. Jesus’ body, the mention of body, brackets his entire ministry. Or, to quote the text at hand, “After he was raised from the dead, his disciples remembered that he had said this; and they believed the scripture and the word that Jesus had spoken.”

Lest we ever forget that the Word became flesh, Jesus’ body, is the temple and then there will be a body on a cross and a body missing from a tomb.

So, it is the right time:

It is the right time…

The temple incident is just the right time. Just the right place. Because without it Lent is metaphorical at best and disembodied at worst.

Just the right time, because without it, our ministry is metaphorical at best and disembodied at worst.

Just the right time because what we decide to do with Jesus’ body matters for our life together and for our ministry.

How we do community, how we do ministry has an impact on actual bodies.How we act with each other is felt in bodies. Our decisions, how we preach, how we teach, how we talk to and about one another — all experienced by bodies.

I fear we forget about such truths. Carry on with protocols, our perceived purposes, our lofty visions, as individuals, as a seminary, as a church, as a nation, as if what we do will not land on flesh and blood. Carry on with supposed discernment and determined decisions as if real bodies will not suffer the consequences. Carry on with budgets and meetings and plans as if the incarnation were only a doctrine decided for the past. Carry on as if what we do is not experienced in God’s body.

Oh yes. Just the right time, because without it, we might never know, never believe that Jesus’ body, the Word made flesh, is now ours to embody. That is the Lenten Gospel truth.