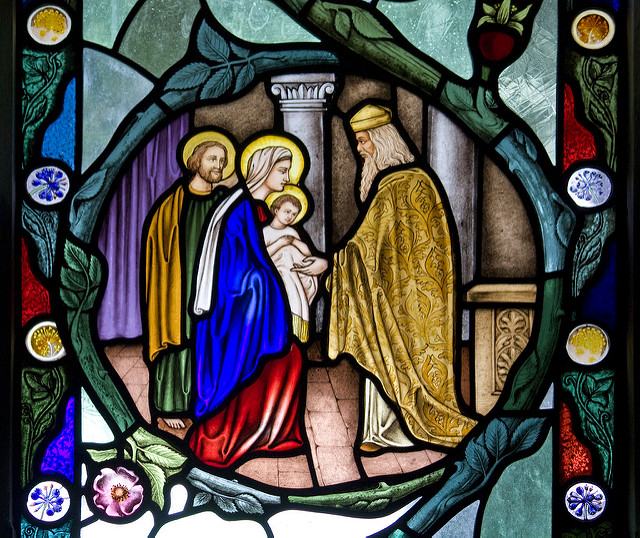 Then Simeon blessed Mary and said, among other things, “your child is destined to be a sign that will be opposed.” It seems a part of being God’s blessing in the world will also include opposition.

Yet, as we observe how “Christians” end up living this out in the world, all too often, the order of God’s intention is reversed. It’s as if looking for opposition is that which will secure blessing. That finding ways of opposing others and carrying out actions that will certainly end in antagonism are badges of honor. And when we get the order mixed up, the result is not blessing at all and certainly not for all. Because whenever we set out to do anything for the sake of justification or to secure our own sanctification, the result is always self-centered and self-serving. Yet, Simeon is clear — Mary’s blessing, the blessing of Jesus in this world, will not be met with whole-hearted approval.

Mary knew this, of course. Her song in response to God’s favor gives witness to this truth. Mary never saw her own favor as a singular blessing from God. Mary situates, correctly and experientially, what God did for her in the larger scope of the core of God’s character. She never individualizes God’s favor. She never claims God’s favor for herself alone, but recognizes it as central to God’s character. And Simeon shows up with the benediction that affirms who God sees Mary to be.

Good thing, as centuries of interpretation have regarded God’s favor of Mary as merely a charity case, lifting up the meek and lowly Mary, as if she is not capable of true knowledge of God. That her song is nothing more than humble and self-deprecating gratitude. However, God regards Mary, not to do her a favor, but to show, in part, that God favors those whom the world rejects. As Shively Smith notes in her commentary for this week, the poor are not, “a ‘cause’ Jesus champions. When Jesus talks about the poor, he is talking about himself.” When God regards Mary, God is revealing the very heart of who God is.

Mary is blessed, Jesus is blessed, because both represent who God is and where God is. When you find yourself on the margins of society, the outsider, poor, a person of color, a woman, a Muslim, a Jew, LGBTQI, expect opposition. The center never tolerates the truth from the de-centered. The privileged do whatever is necessary to silence anyone who might threaten their power. Because central to empire is opposition. Opposition is where empire starts, not with blessing — opposing those who would upend its control; muzzling any opposition that might call its methods into question; suppressing any perceived opponents of its supremacy. When God’s favor turns into a sign of prosperity and the warrant to justify removing God’s blessing from others, it is then and there that you know the second part of Simeon’s sermon has been ignored. And those who want to make Christmas great again are unable to envisage the subversiveness of Simeon’s words.

I think it’s important that opposition is named so early on in Luke’s Gospel. Not just because it’s a Lukan theme (case in point, Luke 24:11), but it’s as if God knows humanity all too well. That if we sit in blessing too long, ignoring its accountabilities and responsibilities, keeping it all to ourselves, it too easily becomes blessing without responsibility, without implications, and without urgency. And, it too easily becomes blessing that is believed to be deserved, blessing that is perceived to be earned and entitled, and blessing that is celebrated as reward.

And Mary needs to hear her blessing and its consequences sooner, rather than later. After all, when Jesus comes home to Nazareth, his sermon, which he learned from her and borrows from her, by the way, will be met with rejection. Mary doesn’t have to wait long before she witnesses the truth of Simeon’s words.

And, on this eve of a new year, I suspect we will not have to wait long either if we are committed to a new year that carries Christmas forward. Because, if we choose to live out the blessings of Christmas, rejection is just around the corner. Count on it.

Blessing and opposition is what it means to live Christmas beyond Christmas, despite of and in the face of those who think and act otherwise. Dear Working Preachers, we are called to do the “work of Christmas” beyond Christmas so that Simeon’s sermon can be preached by others.

When the song of the angels is stilled,
When the star in the sky is gone,
When the kings and the princes are home,
When the shepherds are back with their flock,
The work of Christmas begins:
To find the lost,
To heal the broken,
To feed the hungry,
To release the prisoner,
To rebuild the nations,
To bring peace among people,
To make music in the heart.1

1 Howard Thurman, “The Work of Christmas,” in The Mood of Christmas and Other Celebrations.