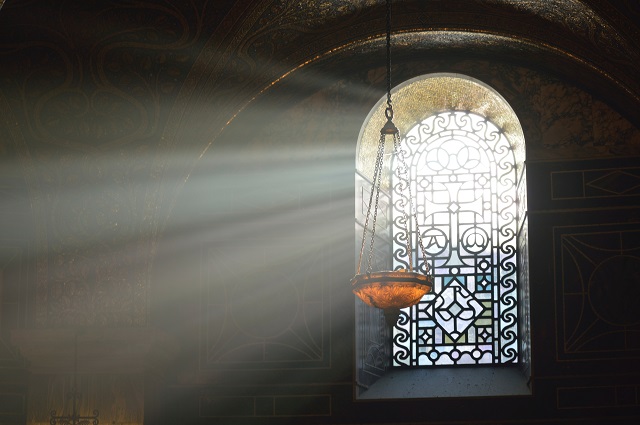 Photo by Joost Crop on Unsplash; licensed under CC0.

It is the first Sunday of the New Year. For most households in the Western world, Christmas lights have been put away, the tree stowed until next year or put out on the curb for recycling. Christmas carols are no longer playing on the radio (which may actually be a relief, since they’ve been playing non-stop since the day after Thanksgiving). There may still be a few Christmas decorations in the clearance section of the big-box store, back in the corner, but the shelves up front are now full of Valentine’s Day paraphernalia.

John 1 is traditionally read on Christmas Day, but since most of your parishioners didn’t go to church on Christmas Day, this Sunday is the day to ponder this beautiful passage. And it is appropriate that we as the church do so, because it is, after all, still the Christmas season. In fact, many of our Orthodox brothers and sisters haven’t yet celebrated Christmas. They will do so on January 7.

And as it turns out, these stark winter days of the new year may be exactly the time to proclaim the wonder of the Word-made-flesh. The last several weeks have been full of the trappings of Christmas: decorations and lights and holiday parties, the sugar-rush of endless cookies and candies, the busy-ness and pressure of making the holidays memorable for our children and grandchildren. We love Christmas, of course, but everything that we have to get done for the traditional celebration of Christmas may add to our weariness.

And that is perhaps especially true of you, dear Working Preacher. You have been busy this season. You and your family have had all the usual frenzy of the holidays—shopping, cleaning, baking, holiday gatherings—plus you have had to plan and lead and preach at several extra worship services. And perhaps after Christmas, you got the chance to travel to see beloved family. But now the presents are opened, the finery put away, and the rest of the world has moved on to New Year’s resolutions and regret over credit card bills and a few extra pounds gained over the holidays. Another Christmas is past, and we as a culture have tucked it away in nostalgic memories.

But not in the church. The church has not moved away from the celebration. The church is the one place where it is still the Christmas season because the wonder of the Word-made-flesh demands more than sentimentality and tradition. It includes but also rises above nativity scenes and candlelight services and children dressed as angels and shepherds. The wonder of the Word-made-flesh is cosmic in scope and cannot be contained or packed away with the decorations and trappings of Christmas.

That is why, on this stark January Sunday, without all the cultural accretions of the holiday season outside the church distracting us, we may be better able to hear and speak of mystery.

There is one Christmas song above others that gives voice, I think, to this mystery of which John speaks. Being the daughter of a church organist, I know a lot of Christmas carols. Growing up, my mother and three sisters and I always sat in the church balcony for services because that’s where Dad played the organ. The organ pipes were right behind us, so we learned to sing really loudly in order to hear ourselves. And I loved (and still love) all the carols—“O, Come, All Ye Faithful,” “Joy to the World,” “Hark, the Herald Angels Sing”—we sang them all with gusto.

But there is one carol that, both then and now, I find the most haunting, the most mysterious and profound. It is the one song that echoes in my memory whenever I read the prologue of the Gospel of John:

Of the Father’s love begotten
Ere the worlds began to be,
He is Alpha and Omega,
He the Source, the Ending He,
Of the things that are, that have been,
And that future years shall see
Evermore and evermore.

The Latin poem of the 4th-century poet Aurelius Clemens Prudentius, combined with the 12th century plainsong chant “Divinum Mysterium”—this song speaks of the “divine mystery” indeed of the Word who is in the beginning with God, the Word through whom all things were made. The song captures, I think, better than any other Christmas carol, the cosmic nature of this birth, which is the subject of John’s prologue.

There is no manger mentioned in John 1, no shepherds or angels or wise men or stars. Instead, John speaks of the beginning of time and the creation of all things. John speaks of light breaking into the darkness of our world and of our lives. John speaks of cosmic matters. But that does not mean that this is all is detached from the world as we know it. Because John’s cosmic narrative leads to this: “And the Word became flesh and lived among us.”

The Word became flesh—became a body, like our bodies, our earthy, beautiful, messy, fragile bodies. And because the Word became flesh, he gives us, who are made of flesh, power to become children of God. That’s where the Christmas narrative takes us: “From his fullness we have all received, grace upon grace. The law indeed was given through Moses; grace and truth came through Jesus Christ.”

It is not about sentimentality; it is about life and light and love, breaking into a world full of division and grief and despair. In this New Year, you, dear preacher, have the awesome privilege and responsibility of proclaiming again this divine mystery, this earth-shaking good news, to a world that needs to hear it. And know that as you do so, you join with angel choirs and creation itself in chorus:

O ye heights of heaven, adore Him;
Angel hosts, His praises sing;
Powers, dominions, bow before Him
And extol our God and King.
Let no tongue on earth be silent,
Every voice in concert ring
Evermore and evermore.

Thank you for your faithfulness in continuing to proclaim the Gospel, Dear Working Preacher, especially as this very busy season draws to a close. God bless you with the joy of the angels and the wonder of children as you speak to your people again of the Incarnation, the Word-made-flesh, Jesus Christ, our Lord. Evermore and evermore.