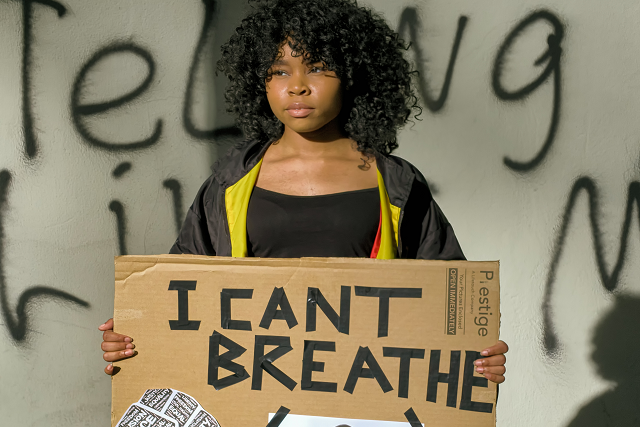 Photo by Obi Onyeador on Unsplash; licensed under CC0.

As you prepare for the Second Sunday after Pentecost (Ordinary 11), whether you will gather in a familiar shared space, or continue online, the need for a living word is as urgent as it has ever been.

It is the sixth month of the first year in the third decade of the 21st century after the reports of Jesus resurrection changed humanity’s understanding of the world. And STILL the disruption throughout creation is immeasurable.

This past week, in outrage and frustration, citizens in the United States took to the streets as if the deadly virus had been remedied. If, God willing, we are not about to experience a resurgence of sickness, then how ripe is the harvest? Even if we are again quarantined, the actions of the last weeks expose that we are yet sheep in need of a shepherd. So today’s rehearsal from Matthew is challenging.

For some, the events of the last weeks in North American have been a rude awakening. The depraved mythology of America has been exposed. For others, in the United States and especially beyond its borders, the truth has been told of longstanding politics of greed, practices of fear mongering, and empty promises to the poor that co-opt them to side with the rich against others in need of health care, education, and employment.

Those in power, from the politicians to the police, wear the clothes of Christianity, wolves dressed in the name of the Lamb. Waving a Bible in the name of politics, they seduce the flock because they say they are against abortion or against gay marriage or against gun control. They publicize symbols of moral credit in the name of gender equality, racial justice, or reproductive rights. Yet behind all their talk remains a perfectly functioning system that plunders both the poor and the earth; treating women and children as sex toys; and maintains a glass-ceiling painted white above the efforts of persons of color in the United States and around the world.

You read correctly: none of us can breathe.

For the first-century disciples the times were no less oppressive. The people were terrified. The authorities were panic-stricken. So much so, in their insecurities they had judged Jesus and his movement in Israel to be a threat. (Do not forget, that as Matthew’s narrative began, the authorities were so alarmed at the rumors of Jesus’ peace that they had children killed). But now, they perceive the threat clearly: the transforming work of Jesus heals, restores, and reconciles. This is not acceptable in an us-against-the-world system.

Help you people see that we read these words of the teacher Jesus after we have rehearsed the proven promise of the resurrected Christ to send the Holy Spirit. The same God that told the first humans to fill the earth is the God who scattered every nation to its global zip code. This God, who raised Jesus from the dead, gathers from every nation, tongue and tribe, those who will be a witness to scriptural righteousness (spelled j-u-s-t-i-c-e). And as we look back at the words of Jesus recorded in Matthew, do not miss that this global mission must first begin in our own neighborhoods.

God is calling for those who will offer Christ-like compassion on the harassed and helpless. The spirit of the risen Jesus gives his true follows authority to overcome the evil that crouches at our doorstep. The question is how will your listeners choose to respond? Will they, like Christ, sacrifice their very existence that the children of God all live life abundantly? Or, will they, like Cain, exercise their capacity to take the very life of their siblings?

Say their names, just as Matthew records those disciples whose stories we only know briefly:

There are such murders in your ZIP code. Say their names. And if you fear that this is too provocative, then look closely at this text. The scene recorded in Matthew’s gospel, before the resurrection, makes explicitly clear the wolves are not out there among the Gentiles.

Here Jesus is saying that among the children of Israel, among the people of God, among our tribe, are those who are lost. Here is the reminder that this is not the constitution of the nation, but the sacred text of a community called out from among the nation.

Some to whom you preach this week will not recognize the potential of hope. Some will not have the capacity for faith. Like Thomas, they need their own intrusion of the risen Jesus. Who will be Christ for them? It is harvest time. Remind your listeners, they have been summoned, by God, to work in the fields. The work is plentiful. The work is grueling. The work is necessary. In every city. In every village. Among the sick and diseased, the harassed and the helpless. Those who have been led astray are more than ready for a glimpse of the Kingdom of God.

These are chaotic days. It does not matter what perspective you are taking on current events. It is difficult to ignore that these are chaotic days. And in the chaos, it only takes a bit of silence to capture our attention. The Prince of Peace has come. And he is sending us into the chaos. Jesus compares his present age to the very cities that God destroyed because no righteousness could be found there.

Then and now, God knows this moment is atrocious. Not every house will receive you. Go anyway.  You will be dragged in front of the authorities, so be wise while remaining calm. Because we can expect that those who claim to be among our ranks will be the very ones who ignore God’s voice and therefore those who betray us. You will be hated. Not because of your race or your gender identity or your employment or your political affiliation. You will be hated because you practice the self-denying, radical non-violence of a vulnerable God.

The One whose steadfast love endures. Forever. Because Christ died for us, while we were yet sinners. And this, this is the chaotic world into which God continues to send Spirit-filled agents in the name of Jesus. If we do the transforming work that heals, restores, and reconciles, our labor will not be in vain.