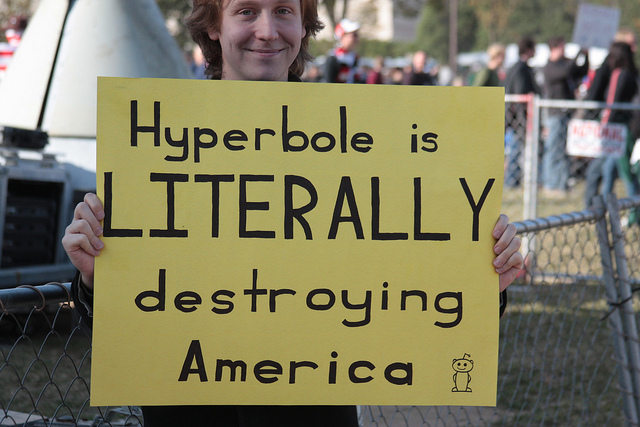 If it sounds like Jesus is coming down hard on the disciples, well, it should.

We have a tendency not to like this Jesus, this Jesus who seems to mean business, who lays down the law, so to speak, and thus we grasp onto whatever we can find to explain away Jesus’ comments.

And so, writing a passage like this off as just hyperbole is a convenient hermeneutical escape. It’s easy to pass over hyperbole as just what it is — over-the-top rhetoric, exaggeration at its finest. Jesus didn’t really mean what he said, right? He didn’t really mean cut off your foot or your hand or tear out your eye, for heaven’s sake. And so sayings like this end up on the island of misfit texts. We don’t know quite what to do with them, so we relegate them to those passages that don’t really apply to our lives today.

Furthermore, it’s easy to dismiss Jesus’ hyperbole here when it comes to navigating the vast hermeneutical landscape that is making sense of Scripture. Those who choose to read the Bible literally,  and then, as inerrant and infallible, are just fine to look past these injunctions, and yet insist on literal interpretation of passages that are far more ambiguous than our Gospel reading for this week.

But once we cast-off Jesus’ so-called exaggerations, it’s all too comfortable to reject his primary point as well. Hyperbole becomes a distraction that can take us down an interpretational rabbit hole from which it is hard extract ourselves. All of a sudden, we are debating the meaning of the hyperbole rather than paying attention to its function. We start dancing around biblical literalism, all the while ignoring what the hyperbole is trying call out, what truth it is revealing, the significance of the claim to which the hyperbole is pointing. The function of the hyperbole is to magnify what’s at stake. Hyperbole should not always be dismissed as mere hyperbole — it points to truth, a truth that must be heard and must be taken seriously.

And this discomfort quickly turns into some sort of self-justification for our actions or lack thereof. We all too quickly assume that putting a stumbling block in the way of others ends up being but a mere misstep in their lives. They will quickly, we think, get back up on their feet. A nondescript, rather unnoticeable trip along the way doesn’t lead to a lifelong trajectory, right? Sure. Go ahead. Let’s convince ourselves of that. And yet, if we are honest, we know that tripping over something, a little stumble, can lead to a major fall — a fall from which it takes a very long time to recuperate, if ever.

But the hyperbole points to what is at stake in being the cause of a stumble in faith. It’s not just about standing in another’s way of faith but denying their individual expression of faith. It’s not just that we have somehow prevented someone from having faith, but have prevented a life of faith that they, and only they, can embody. Because by standing in someone’s way to a relationship with Jesus, we have somewhere along the line toed the line, insisting on certain acceptable and so-called valid manifestations of faith.

I am finishing this column late this week, for a number of reasons, but maybe because I was supposed to. I am at the “Nevertheless She Preached” conference in Waco, Texas, and we “She Preachers” have significant experience in what it feels like to have stumbling blocks placed in our way toward living into the “faith fullness” of what and who God has called us to be. This conference is a space to give voice to these stumbling blocks, these constant and consistent obstructions that just keep on coming even though we have supposedly made strides in the church toward the acceptance of and commitment to women as preachers in and leaders of the church.

As women, we know all too well how our attempts at telling the truth are systemically and systematically dismissed as hyperbole. Sexual harassment? Isn’t that kind of an overstatement? It was just a few comments here and there. They didn’t mean anything. Claiming sexual harassment is a little over the top, don’t you think? Sexual assault? Well, it couldn’t have been that bad, otherwise she would have notified the authorities. Come on, rape? Really? Isn’t that a bit of an exaggeration? And to claim rape, well, then think about how you might ruin the poor guy’s life?

Hyperbole becomes the convenient excuse to stop listening, to stop believing, to question the veracity of the claims, claims that take an extraordinary amount of courage to utter.

When we place stumbling blocks in the paths of those trying to answer God’s call — as they and only they can hear it and live it — we are effectively silencing them. No, says Jesus. That’s what’s at stake.