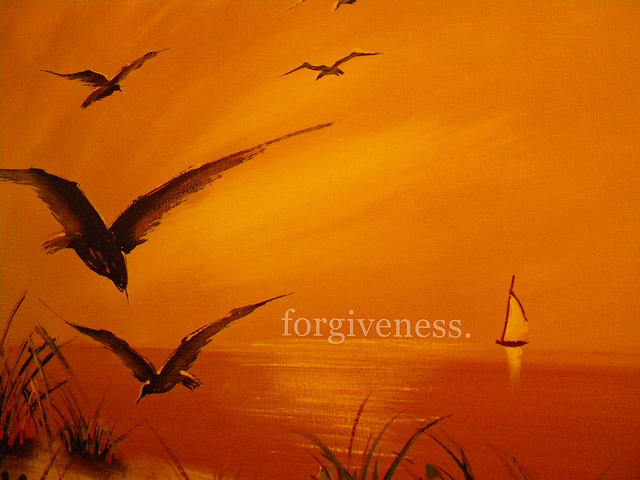 It truly has to be one of the most difficult of human acts, not only to give but also to receive. For Jesus to tell this parable means there’s a lot at stake here. Why is forgiveness so important? For us? For God?

And of course, the other challenge of this passage? The call to a generous forgiveness. Not only must we forgive, be we have to do it A LOT. Peter posits a big-hearted amount, seven times. I can hear in this interchange between Peter and Jesus a conversation along the lines of something like the following:

Exactly. We try to put a number on forgiveness, set contractual arrangements for it to take, establish parameters for when or when not to forgive. But, forgiveness doesn’t work like that.

For a sermon on this passage from Matthew to work, it can’t be a generic advisement to forgive or a veiled admonishment if you don’t. Then, the only thing our parishioners will experience is some sort of moral guidance or counsel, one more thing to do to be a good Christian. As if they don’t already have enough to remember.

As it turns out, according to Jesus, according to God, forgiveness is not just a good idea when it comes to the maintenance of relationships and communities.

Forgiveness is a theological necessity.

What do I mean? I mean that God knows exactly what happens when forgiveness is withheld; when it is deemed unnecessary; when it is rejected.

So, how do we preachers preach on forgiveness, especially its theological magnitude, without the sermon collapsing into principle or advice? Well, it means some pretty hard work on our part. I know, just what you wanted to hear. As if preaching is not already hard enough. A first step might be exploring various definitions of or quotes about forgiveness. Which ring true? Which seem right? And why? What truth about forgiveness is communicated that you can’t seem to find the words to express?

For example, “Dumbledore says people find it far easier to forgive others for being wrong than being right.” -J.K. Rowling, Harry Potter and the Half-Blood Prince. Or, “Forgiveness is not an occasional act, it is a constant attitude.” -Martin Luther King, Jr. Or, “To be a Christian means to forgive the inexcusable because God has forgiven the inexcusable in you” -C.S. Lewis. A few years ago, at the end of my yoga class, the instructor shared a definition of forgiveness that made me think, “oh, now I think I might get it” — “Forgiveness is letting go of the hope that the past can be changed.”

These quotes, however, are not solutions to a sermon on forgiveness. They are, rather, a suggested beginning step toward being able to name and articulate why forgiveness is critical for us and at stake for God.

The next step is a lot harder. I think for a sermon on forgiveness to ring true, we preachers will need to go to places we would rather not frequent — the times when we have not forgiven; the moments when we were not forgiven. What does it feel like, really feel like, when you can’t forgive or when someone cannot forgive you? What happens when forgiveness does not happen? How do you feel about the other? Yourself? On the other side, what does it feel like to forgive, to be forgiven? We preachers have to be willing to enter into those spaces first before we can invite others into those same experiences. We have to be able to name them, describe them, because that’s what will make the difference between a sermon that touches the deepest longing and need for forgiveness and a sermon that only skims the surface of our souls with trite reproach.

And, we haven’t even touched on what it means to forgive yourself.

If we are unable to enter the spaces and places where we can sense the gravity of forgiveness, then we will not be preaching the theological weight of this passage from Matthew. It won’t be easy, that’s for sure. But maybe then we remember what it means to have God forgive us. That should help a little.