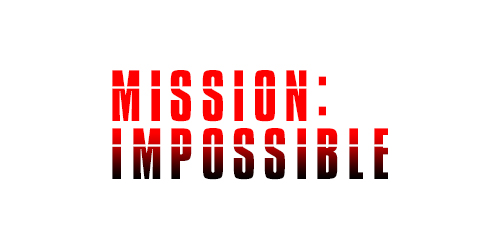 Preachers: Your mission, should you chose to accept it, is to preach the life-affirming, justice-seeking, boundary-breaking Word of God.

No big deal. Right? You’re the capital “P,” Preacher. You got this. A little three-points, a little seven steps for a happy marriage, a little narrative razzle-dazzle, a little PowerPoint. Boom! Done. On to the next one.

I say, to hell with such nonsense. Literally. We are called to proclaim the very Word of the Everlasting God. Let us never forget, not for one second, that such a charge is impossible.

Yesterday, I saw the latest edition of the ever-expanding Mission Impossible franchise. It was awesome! The best one yet, in fact. I highly recommend it — you’re a preacher, after all; you could use a little me-time.

As I sat there in the crowded movie theater, white-knuckling the sticky plastic cup holder, something occurred to me. Why don’t I feel this way when I preach?

If you’ve seen any of the Mission Impossible films, then you know that they never fail to live up to their namesake. Even though we’ve seen Ethan Hunt wriggle out of countless near-death experiences, even though we’ve seen him luge, dive, climb, shimmy, and fight his way out of impossibly tight situations, when you are watching the film you wonder, maybe not this time. Mission Impossible: Rogue Nation is no exception. If anything, they up the ante on impossibility.

Let me ask you a question. When you make the long, lonely walk to the pulpit to proclaim the Word of God for the people of God, how often do you hear the Mission Impossible soundtrack playing in your mind? Dun-dun-da-dun. Dun-dun-da-dun. I never hear that sound. But I should. And so should you. What if God doesn’t show up? What if we aren’t able to diffuse the bomb that is the gospel in time? Commence cold sweat.

Preaching is impossible. That God’s Word would appear on human lips! Impossible. Like Ethan Hunt we are charged to accomplish an impossible task, but our mission is even more perilous. We don’t have fancy gadgets and body armor. Sure, we try. We use Prezi and YouTube and Twitter to try to make our sermons snazzier. But these are mere window dressing. Preaching, at its core, is about you showing up in the hope that by some mysterious act of brilliance, God will show up, too.

The late, great theologian Karl Barth — who knew a thing or two about the impossible mission that is preaching — once wrote, “The Moment when God, not [a human], speaks and acts, is the Moment of Miracle. And men [and women] have attained the utmost limit of their vigorous action when, possessing the status of John the Baptist, and filled with awe, they bear witness to God and to [God’s] Miracle.”1 Barth is right. Preaching is a capital-M Moment. No matter how skilled we are, no matter how sophisticated our exegesis, no matter how many times we’ve read Luther’s Small Catechism or Calvin’s Institutes, we cannot escape the impossibility of preaching.

This is why preaching-as-teaching is not worthy of our time. It is beneath our calling. Because the Word of God calls for more than something that we know that we can do, we must not abide in the safe Sunday sun of lemonade sipping, sear-suckers, and sundresses. Our calling is into the shadows, into uncertainty, into the mysteries of the universe where God whispers to us and, by the grace of God, through us. We need to live and proclaim lives of faith. Abraham. Sampson. Ruth. Jesus. Paul. These are the stories that form us, that awaken us to a way of being in the world beyond the mundane and beyond the laissez-faire consciousness bolstered far too much by Western Christianity. You, preacher, are also called to such impossible feats of faithfulness.

Let us embrace the impossibility of our task as preachers. Let us set sail from the shallows to the depths where the Spirit of God may do the impossible in and through us. Let us lean toward the world in love — and love offers no guarantees. Love walks the tightrope without a net. Such will change everything we’ve come to learn about sermon development and delivery — oh, and by the way, when you’re doing it right, when you are preaching the impossible, your message will self-destruct.