A Review: ‘What Shall We Say?’ by Thomas G. Long 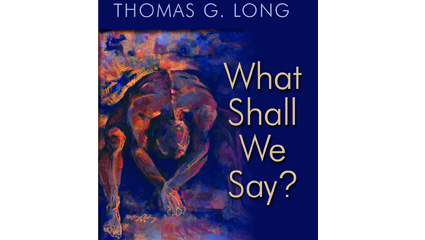 In his new book for preachers, What Shall We Say?, Thomas Long pulls up a chair at the game table and considers the next move in what has been called “The Impossible Chess Match,” or alternatively — the problem of evil.

Many of us know this terrain, whether from the confrontation during the coffee hour after church, the tearful phone call during the week, or the cold, dim setting of a hospital room.  Why, pastor?  Why has this happened?  How can such suffering exist if there is a God who is loving and all-powerful?

Too often in this moment, words stick in our throats and silence fills the air.  I’m offering a ministry of presence, we think. Sometimes, the moment calls for exactly that — simple presence. But other times, we regularly over look the great need for something to be said. Eventually, we have to speak. And now is the time, Long says.

This book is, “an attempt to stand with preachers, who then will stand with their parishioners, in thinking through how faith in a loving God holds together with the facts of life in a suffering world.” (p. xiii) So, what can we say?

To begin, in chapter 1, Long brings the reader face to face with the problem of evil through a particular picture of human suffering. It isn’t September 11th. It isn’t the Holocaust. No, Long reaches further back into history to a time when not only the earth was shaking, but the common worldview as well. The date: All Saint’s Day, November 1st, 1755. The place: Lisbon. With churches packed, honoring this holy day, the city of Lisbon was struck by an earthquake, which brought the city to its knees. Aftershocks took the rest of the city still standing, and massive winds spread fires across the city. To top it off, a giant tsunami came hurtling into the city drowning out any hope that might have been left. Thousands died that day.

Due to its location in both history and intellectual thought, Lisbon makes an excellent example to frame the problem of evil. In the centuries before the Lisbon earthquake, the problem of evil was easily solved. Evil came from the hand of God to those who deserved it. But by 1755, the Enlightenment had arrived, and with it, a new understanding of how the world worked. “The Lisbon earthquake would be the first disaster of world wide proportion that could not be neatly fit into the accepted idea of divine causality.” (p. 7) For the first time, philosophers began to ask if God was the source of such suffering. And if not, then what role did God have in the events of the world, if any?

With Lisbon as the backdrop of the book, chapter 2 continues on to reveal how the problem of suffering in the world has jumped from the minds of philosophers in their study to the hearts of worshipers in our pews. Long points out that while most of us today have no trouble oscillating between faith and science, our beliefs are almost always confronted when innocent suffering occurs.

If anything can said with regards to human suffering and the existence of a loving and all-powerful God, the road to discovery contains a few warning signs, says Long. Chapter 3 explores two of these signs for which all preachers ought to keep watch.

Long is not the first to occupy this seat at the game table. Many have come before him.  In chapter 4, Long reviews the moves made in the past that have led us to our current place in this unending chess match. From Kushner to Cobb, Augustine to Hick, many have sat on this side of the board, staring into the eyes of evil. While seemingly grateful for their courage to say something, Long doesn’t hesitate to critique what has been said about the problem of evil in the past. Kushner’s powerless God is little comfort.  Cobb’s whispering God is found unpersuasive. Augustine’s free-will defense slips on the origin of evil. Hick’s soul-developing suffering isn’t worth what it costs.

Of course, no book on the topic of the problem of evil would be complete without passing through the tattered pages of the book of Job. In between chapters 4 and 5, Long offers an “interlude” on this well-known story. Much like one wishes to skip the intermission of a play so as to see how the story ends, the reader is tempted here to skip this section and hurry on to the final chapter in anticipation of what can be said. The reader, however, would surely miss out on a new twist on Job’s story.

Finally, in chapter 5, Long makes good on the promise he made at the very beginning — to offer the preacher something to say in light of the great suffering in the world. Long accomplishes this beautifully with a fresh look at the Parable of the Wheat and the Weeds (and the parables in between). As he brings us along on a slow and careful walk through this parable, Long takes up the following questions:

God, did you cause this?
Can we fix it?
Will it always be this way?

I won’t spoil the ending by saying any more. However, in the end, I must admit I am left wanting. The very critiques Long makes toward others’ responses to suffering in chapter 4 may be directed at his own conclusions as well. It is important that one recognize and articulate the holes in one’s own argument and Long fails to do that.

With that said, I highly recommend this book. As is always the case with Long, the book is thoughtful, clear, and filled with great story telling. It will break open one’s heart and elicit the desire to go for a walk. Having scoured the depths of the murky waters of the problem of evil, the reader will come away with words to speak.