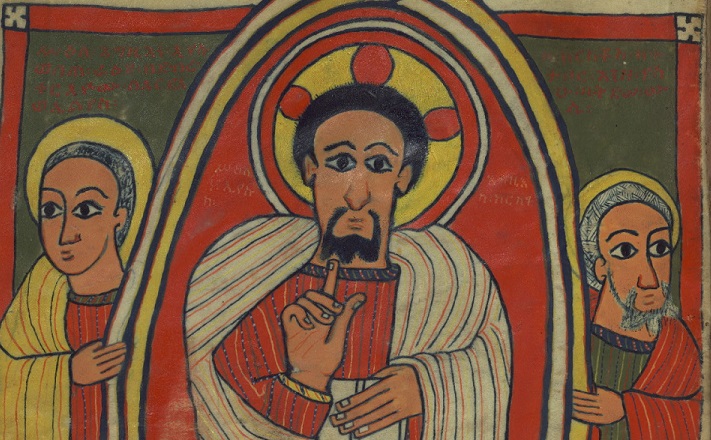 On the mountaintop, over the course of 40 days, God conveyed to Moses instructions for crafting the various Tabernacle appurtenances. The sustained attention to the Tabernacle shifts the narrative’s focus away from God’s deliverance of the Israelites out of Egypt towards God’s dwelling with the Israelites in the wilderness. The tabernacle instructions continue from Exodus chapter 25 to chapter 31, concluding with God’s instructions to Moses: “When God finished speaking with Moses on Mount Sinai, he gave him the two tablets of the covenant, tablets of stone, written with the finger of God” (31:18 NRSV).

If we skip over the golden calf episode in Exodus 32-34, and begin reading at today’s lesson, we see that there the story picks up exactly where 31:18 left it off: Moses now comes down from Mount Sinai with the two tablets of the covenant in his hands (34:29). This tells us that the golden calf episode is a self-contained story that interrupts the smooth flow from 31:18 to 34:29. Reading directly from the former verse to the latter verse, one would never know that the golden calf incident had taken place at all.

At chapter 35 the story returns its focus to the tabernacle, as though indeed the golden calf incident had not happened. So, the general structure of the second half of the book of Exodus looks like this:

Israelites construct tabernacle according to instructions [35-40].

The golden calf episode, then, is given to us as a self-contained story. Our lesson tells the epilogue to that story, and it touches upon key themes that had emerged during the golden calf story.

Our lesson captures all these themes. At the foot of the mountain the Israelites can clearly see that Moses is indeed the mediator of God’s presence; this is indicated by the radiance of his face, which we are explicitly told was a lingering effect of the divine presence that Moses brings to the people.

The Israelites can likewise recognize that Moses mediates the restored covenant as he would “tell the Israelites what he had been commanded” (Exodus 34:34). The Hebrew grammar of these verses designates that Moses’ covenant mediating role was to be an ongoing, continual reality in the life of the people.

As an epilogue to the golden calf episode, our lesson — without even mentioning the golden calf — effectively repudiates all idolatrous mediation of the divine. Here, no mere object of gold can mediate the divine presence. Instead, the radiance of the divine shines directly through the face of God’s living servant.

But despite the prominence given to the visual sign designating Moses as Israel’s mediator, our lesson makes it clear that the substantive mode of Moses’ mediation is verbal: these few verses bear an unusual density of “speaking” terminology. Henceforth, the Israelites will know the divine will because it will be revealed to them as Moses speaks to them the commandments that God first speaks to him.

Today’s Gospel reading dramatizes the ultimate instance of divine-human mediation, as Jesus radiated divine presence while praying, and then as he engaged with the two preeminent Old Testament agents of divine mediation at the Mount of Transfiguration. Just as the Israelites, at the foot of the mountain, were enjoined by Moses’ visage to pay heed to his words as covenant mediator, so also were Peter and James enjoined by the voice from the cloud (in another allusion to the Sinai events) to recognize Jesus as God’s chosen one, and to obey his words.

Our New Testament lesson, taken from the Apostle Paul’s second letter to the Corinthian church, emphasizes this theme of divine covenant mediation directly through human agency in Paul and his entourage who speak as “persons sent from God and standing in his presence.” Reception of the divine word, now mediated through Christ and his sent ones, makes it possible for us to approach God “with unveiled faces, seeing the glory of the Lord.”