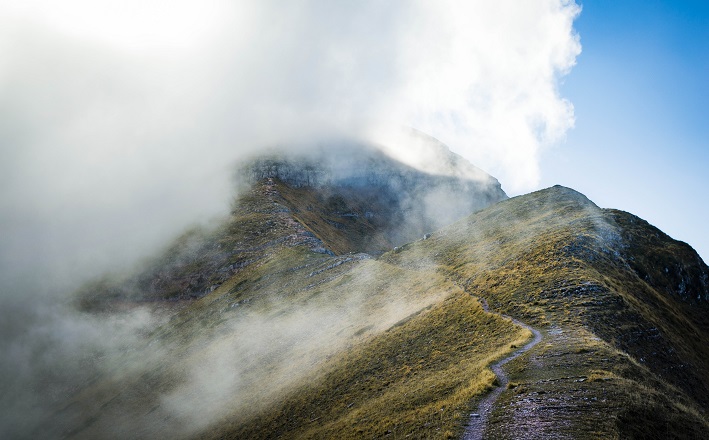 And his clothes became dazzling white, such as no one on earth could bleach them. - Mark 9:3 (Public domain image; licensed under CC0)
February 11, 2018

The story looms large with the miraculous and the impossible, bearing witness to the limitless power of God. The account may intentionally build upon the ancestral account of Enoch and his previously unparalleled ascent to heaven in Genesis 5:24. Underneath all of the supernatural occurrences is a narrative about the continuity of the community after a transition of leadership, particularly after a great and incomparable leader.

It is not clear whether Elijah knew of his impending fate; however, his disciple, Elisha, is aware that his father-prophet is leaving and is reluctant to leave his side. (Elijah and Elisha will both be addressed by the title “father” in the community of prophets sometimes known as the children — meaning disciples — of the prophets, see 2 Kings 13:4 and the prophet Deborah as a mother in Israel in Judges 5:7.) The prophets of Bethel (2 Kings 2:3) and Jericho (2 Kings 2:5) also knew that God was planning to take Elijah. Elijah’s ascension was apparently the worst kept secret on this side of heaven.

Elijah and Elisha are miracle-working prophets and their exploits will have no equal until the miracles of Jesus. Jewish readings see Elijah and Elisha as one of the pairs of great men who lead each generation from Moses and Aaron to the time of rabbinic period. Indeed, Moses is Elijah’s miracle-working forbear. Elijah demonstrates his connection to Moses by parting the waters of the Jordan as Moses did the Sea of Reeds, traditionally called the Red Sea. (Joshua, Moses’s successor in the tradition, did the same in Joshua 3:7-17; Caleb is regarded as his partner in leadership.) Some Christian readings see Jesus and John in that tradition with one of the proofs of Jesus’s divinity that he performs or exceeds all of Elijah’s miracles. Both of these traditions are likely at play in the gospel accounts of the transfiguration with which this text is linked thematically and in the lectionary, (see Matthew 17:1-9; Mark 9:2-9; Luke 9:28-36).

A growing crowd accompanies Elijah and Elisha. It seems that prophets from Bethel and Jericho join them. Elijah’s extraordinary ministry has come to an end and not necessarily at a time of his choosing. The community knows the time for change has come. They accompany the outgoing leader and his newly appointed successor through the transition. Elisha is not quite ready to let go. Life transitions are difficult, even when they are joyous on their face, like getting a new job or promotion, moving, or starting life with a (new) partner.

In this transition the outgoing leader offers his successor the benefit of his wisdom and experience. Elijah asks Elisha what he can do for him before God takes him in 2 Kings 2:9, evoking God’s invitation to Solomon to “Ask what I should give you” in 1 Kings 3:5. Their responses are comparable, focusing on the spiritual and intellectual capacities to fulfill their vocations, wisdom for Solomon, and a double portion of Elijah’s spirit for Elisha; however, Eljiah’s bequest is conditional. If Elisha can watch what God will do with and to Elijah, then he will receive what he has asked. The lectionary portion does not reveal the bestowal of Elijah’s spirit on Elisha; subsequent verses demonstrate the scope of Elisha’s powers.

The lection ends with Elijah’s ascent. One moment he is walking and talking with his companion-turned-successor, the next he is in the whirlwind. Elisha’s cry, “Father, father! The chariots of Israel and its horsemen!” has been traditionally understood to mean that he saw chariots of fire associated with the whirlwind. This is supported by Elisha’s later vision of the chariots in 2 Kings 6:17 where he prays that his servant’s eyes be opened to see the chariots.

Elisha is left in a new role with the larger-than-life legacy of his predecessor looming over him. If he is daunted by it, he shows no sign. This lesson is read as a companion text to the story of Jesus’s transfiguration. Here, Elisha has his own transfiguration. He becomes the senior prophet of his community, empowered by the gifts of the prophet who nurtured his own gifts. We for whom these texts are scripture may not see the whirlwind or chariots of God, but we will watch senior leaders pass on and step down and live through transitions of our own. Those transitions will change us and our communities and can, if navigated in the gifts of the spirit, produce leaders whose gifts we could not have imagined.

Most congregations would drown in this text’s cascade of details. “Six days later.” “A high mountain apart.” “Elijah with Moses.” “Let’s make three dwellings.” “A cloud overshadowed them.”

Today’s reading, 2 Corinthians 4:3-6, gives us profound insight into how we are transfigured by a double manifestation — of the Messiah’s glory as the image of God and of God’s glory in the face of Jesus the Messiah.
Print All Text Print All Commentary

Discussion Questions for Transfiguration (B)

It Is Good To Be Here