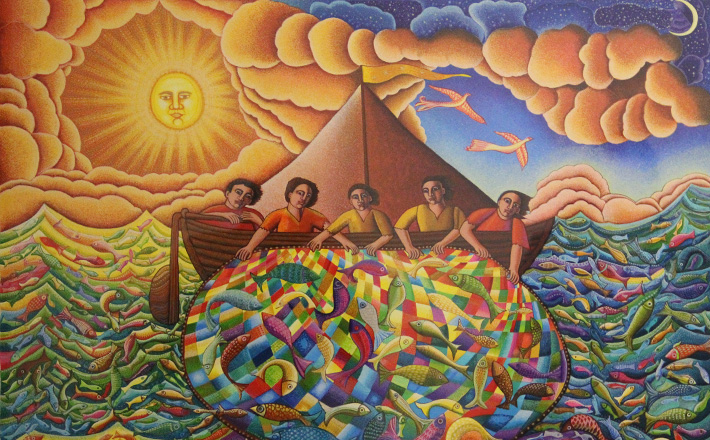 The first time we hear about Saul (7:58), Luke tells us that he was standing guard over the coats of those who would execute Stephen in brutal fashion. But he’s not just a passive witness. No, he “approved of their killing him” (8:1a). Moreover, Stephen’s is not the only Christian life whose taking he has approved. As we move to chapter 8, Saul’s portrait as arch-persecutor is only enhanced as Acts recounts that “ravaging the church … dragging off both men and women,” he shut them all behind bars. And then Luke turns to the impact of these persecutions; leaving the reader for a moment wondering what role this Saul might play in this story.

Of course, Acts was written by a Christian for other Christians. That is, Luke’s readers know who this Saul is; they know what turns his life will take. In short, they and we know how the movie ends! But by introducing him in this way, Luke establishes the dramatic u-turn Saul’s life is about to take. In doing so, he draws a portrait of calling that continues to shape how we understand God’s graceful but not always subtle or easy pull on our lives.

The beginning of chapter 9 finds Saul continuing to persecute the faithful followers of Jesus. This scene reveals something crucial about the character of the discipleship of these early believers. Later on, Acts 11:26 will recount that it was in Antioch when the faithful are first called “Christians.” How then was this group known prior to this? In chapter 9, these people are known as followers of “The Way.” There is a rich irony, of course, that Saul travels great distances, traverses miles of road persecuting these followers of “The Way” only to be struck down on the way to Damascus. Plus, Saul’s call will also be characterized by a life on the road in his many journeys around the Mediterranean.

“The Way” is a powerful metaphor for Christian identity. Instead of being identified by a set of beliefs, these faithful communities were known by their character in the world. Christian faith was a way of life and one that impelled individuals and communities to leave the safe confines of home and church to walk on the road God had set out. “The Way” suggests that faith is a living, active way of life.

But let’s return to Saul. As he draws near to Damascus and a slew of new persecutions, Saul is struck by a heavenly light and addressed by a heavenly voice. This voice belongs to none other than Jesus himself. Jesus’ presence should serve as an excellent reminder that his ascension is not the inauguration of a time when Jesus is absent from the life of the faithful. If anything, in Acts, Jesus’ presence is that much more palpable in the life of these Christian communities, a presence to which the risen and ascended Lord now refers.

Jesus asks Saul why he has sought to persecute him. That is, when Saul afflicts the faithful, he actually persecutes Jesus himself! Whenever Christians are harassed and abused, Jesus is most palpably present with the oppressed. That too is distinctive characteristic of “The Way”.

Jesus’ instructions to Saul are specific but elliptical. Go into the city, and there you will discover what you need to do. Here, we learn something essential about this narrative. To me, calling this narrative an account of Saul’s conversion misses half the story. Saul does not just turn away from a previous way of life; more importantly, he is called, commissioned to walk in a new “Way.” Even more than a conversion, Saul’s monumental experience on the road to Damascus is a call, a commissioning akin to the call of Isaiah or one of the twelve.

God, however, works in unusual ways in Acts. Instead of continuing to dictate instructions from the clouds, Jesus calls upon a disciple in the city named Ananias. Naturally, Ananias resists these instructions. Even being in Saul’s presence could be a death sentence!

But the Lord is unrelenting and reveals to Ananias in one brief sentence the nature of Saul’s call: He will bring the gospel to kings and Gentiles alike. And he will suffer for the sake of the gospel. In brief form, we learn what shape Paul’s ministry will take in the remaining chapters of Acts. Luke also reveals what is central to the gospel. The good news is expansive and broad. It reaches to the widest edges of the world seeking the lost, but God also turns to the powerful of the world and demands justice, grace, and peace. Yet this good news comes with a price, a price we must wonder if we are willing to embrace as Jesus’ disciples.

The story of the call of Saul/Paul is a stirring and famous story. Luke himself repeats this tale three times in the rest of Acts (also in chapters 22 and 26). It is clearly of importance to a narrative hoping to shape not just what Christians know about the early days of the church but how these stories might shape an imagination for community in our current day.

How might the story of this dramatic call on a dusty road to Damascus give us a new imagination? Encourage people to wonder if their zeal, like Saul’s, has been misdirected and even destructive. Encourage them to expect God to ask them to do difficult things and go to unexpected places. Encourage them not to exclude their supposed enemies from the work God might do in the world.

1. This commentary was originally published on this site on April 14, 2013.