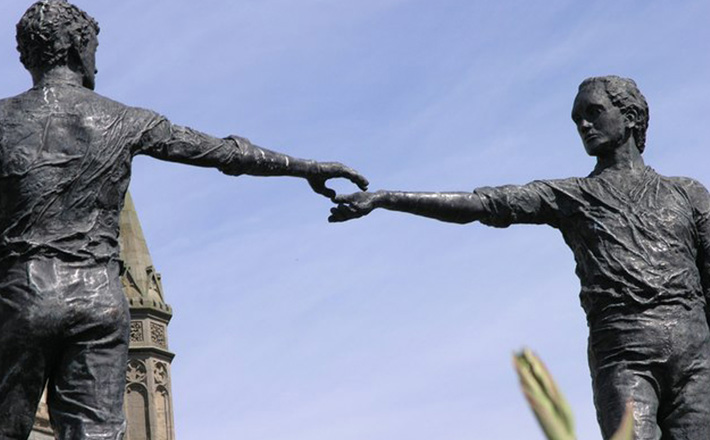 It is in this most anticipated first sermon that we encounter the antitheses (5:21-48). Repeated again and again is the formula “you have heard it said … , but I say to you … ” In this section we meet not a new list of rules, but the intentions of the law. In 5:17, Jesus’ words clearly state that his sermon does not abolish the law and the prophets, but seeks to fulfill them.

In 5:20, there is a bold statement: “For I tell you, unless your righteousness exceeds that of the scribes and Pharisees, you will never enter the kingdom of heaven.” How can anyone’s righteousness exceed the righteousness of those who have studied the law and have interpreted it for the people? This statement is like telling congregations that their righteousness must exceed that of the Pope or the bishops or their own beloved pastors. It is hard to imagine that those who heard Jesus’ words — among whom are ordinary fisherman (4:18) — would have taken any comfort in such high standards.

The antitheses are daunting — refuse to harbor anger, honor oaths whether in marriage or to your neighbors, desire justice so much that you would rather suffer a wrong than impose one on another, love your enemies and pray to God on their behalf. These teachings indicate that what a person does is only part of the problem. This kingdom demands radical discipleship so that even a person’s thought world is transformed by contact with God’s reign.

In the lectionary selection for this Sunday, the first half of the antitheses is included: Jesus’ teachings on anger, adultery, divorce, and oaths. Although these may seem to be unrelated teachings on various topics, in reality the antitheses address various facets of a common issue: what does God’s kingdom look like?

The antitheses literally start with a matter of life and death. Jesus begins with a commandment that is not difficult for most people to follow: “You shall not kill” (Exodus 20:13; Deuteronomy 5:17). Jesus, however, does not stop his teaching there. In fact, his warning against insulting a brother or sister has presented numerous discussions about the nature of the terms used and the severity of the insults. To be angry with a brother or sister makes one liable to judgment. To call one raka makes one liable to the council or Sanhedrin, but to say “fool” (more) makes one liable to Gehenna, a place repeatedly associated with punishment (Matthew 5:29-30; 10:28; 18:9; 23:15, 33).

In other words, the punishments for the offenses appear to be getting worse, but the offenses themselves do not necessarily seem to be increasing in severity. The crescendo of the punishments, however, signals to the audience the severity of harboring anger. Hostility that results in verbal abuse is damaging and just as worthy of punishment as murder.1 The alternative to acting in anger is to seek reconciliation (5:23-26).

In many respects, Jesus’ teaching on adultery should not be scandalous. The law already forbids it (Exodus 20:14; Deuteronomy 5:18). Jesus’ teaching gives voice to the danger of lust that leads to adultery (Matthew 5:28). Warnings against lust are also commonplace. Even the law forbids coveting a neighbor’s wife, who is listed as a possession among the rest of the neighbor’s possessions (Exodus 20:17).

Far from merely seeing women as property to be coveted by men, however, Jesus’ teaching on adultery and divorce reinforces the dignity of women and warns against a culture of male privilege. In the first century, most women are dependent upon fathers or husbands for their daily livelihood. To be used and discarded for another’s sexual desires had repercussions.

A woman who had been seduced brought great shame upon her family. A woman who had been raped was considered damaged goods. For young women, the ability to marry well would be jeopardized. For those who were married, there would be the threat of divorce. Wives could be cast aside for ridiculous reasons, including burning bread.2 In contrast to a world where women were treated like property, Jesus’ mission allowed women to be disciples.

The exception clause to allow divorce in cases of porneia has sparked much discussion on what porneia means (see also Matthew 19:9; cf. Mark 10:11-12; Luke 16:18). The most common interpretation is sexual immorality or infidelity. To construe an exact definition of porneia so that one can meet the requirements of the law, however, is itself a form of legalism. Rather, Jesus’ teaching on faithfulness should be read in concert with the following passage about oaths.

Jesus wants his disciples to be people of integrity, people who are faithful to their promises, people who have no need to swear that they are telling the truth because they are truth-tellers. They should be people who honor their commitments in marriage and who respect the commitments of others. The women in their midst are not people to be used and abandoned at will, but fellow disciples. They are among the ones who are now blessed by God’s reign. For the church to claim Jesus’ message of God’s kingdom come, it must strive to be the kind of place that reflects God’s reign. In these antitheses, Jesus provides a glimpse of God’s kingdom come.