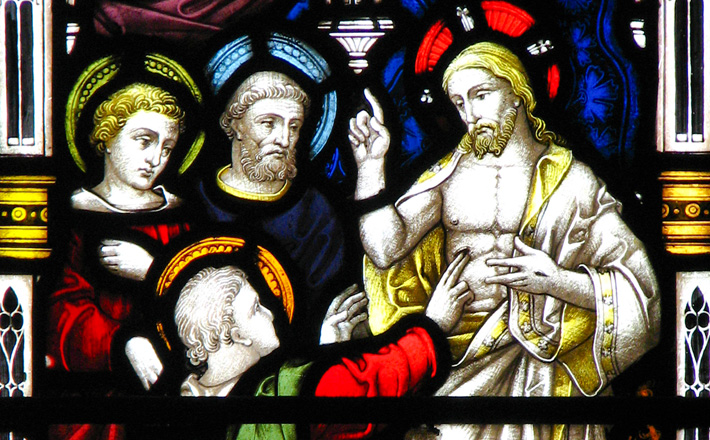 That day, of course, was a day like no other. After the awful reality of Jesus’ crucifixion and burial on Friday, this Sunday had brought some strange and unsettling events.

Early that morning, Mary Magdalene had come, distressed, to tell the disciples that Jesus’ body was missing from the tomb. Peter and “the other disciple” had run to the tomb and had seen for themselves that it was true. They had seen the linen cloths that had been wrapped around Jesus’ head and body lying there with no corpse to be found. Then, a bit later that day, Mary Magdalene had come to the disciples once again, this time breathless with excitement, and told them, “I have seen the Lord.”

“When it was evening on that day, the first day of the week, and the doors of the house where the disciples had met were locked for fear of the Jews … ” We might expect that the disciples would be celebrating by now. Instead, we find them huddled behind locked doors. John says that the doors were locked for fear of the Jews. Since the disciples themselves are Jews, of course, the statement cannot mean that they are afraid of Jews in general. Certainly they are afraid of the Jewish leaders who were behind the plot to kill Jesus. They are likely afraid for their own lives, afraid of their uncertain futures.

Some years ago I read a comment (I don’t remember where or who had written it) that suggested that maybe, just maybe, the disciples were also afraid of Jesus. After all, they had failed him miserably. Peter had denied him three times, and the rest had deserted him (except for “the disciple whom Jesus loved,” who had been at the cross and had taken Jesus’ mother into his home). Perhaps the last person the disciples wanted to meet on that evening was Jesus, risen from the dead to confront them with their failures.

Jesus, however, will not be stopped by locked doors. He who is himself the “door” of the sheep (10:7) comes right through those locked doors and appears in the midst of his frightened sheep. He comes not to confront his disciples with their failures, but to grant them peace. His greeting, “Peace be with you,” carries the sense of the Hebrew greeting “shalom,” a blessing that connotes more than tranquility, but a deep and holistic sense of well-being — the kind of peace the world cannot give (14:27).

Then Jesus shows his disciples his hands and his side, so that they can see that it is he, the real, flesh-and-blood, crucified Jesus — not a ghost or apparition — who is before them. The disciples respond by rejoicing in seeing the Lord, just as Jesus had told them that they would (16:22). Again Jesus speaks a blessing of peace and tells them, “As the Father has sent me, so I send you.”

The disciples are sent to continue Jesus’ mission of revealing God to the world. They will not be left on their own in this daunting task. Jesus had promised to send another Advocate (paraklétos, one who is “called alongside” someone) who would be with them forever (14:16-17). Now he fulfills that promise. In an act of new creation (cf. Genesis 2:7), he breathes into his disciples the gift of the Holy Spirit (20:22). This Advocate or “Spirit of truth” will teach them, remind them of all that Jesus has said to them, and guide them into all truth (14:26; 16:12-14).

Jesus is not giving his disciples some special power to decide whose sins will be forgiven and whose will not. Rather, he is further specifying what it means to be sent, to make known the love of God that Jesus himself has made known. As people come to know and abide in Jesus, they will be “released” (aphiemi) from their sins. If, however, those sent by Jesus fail to bear witness, people will remain stuck in their unbelief; their sins will be “retained” or “held onto” (kratéo). The stakes of this mission are very high indeed.

For some reason (we are not told why), Thomas was absent and missed out on this first Sunday evening encounter with the risen Jesus. Although he has gotten a bad rap as “doubting Thomas,” he asks for nothing more than the others have already received: to see Jesus, wounds and all. The wonder of this story is that Jesus shows up again one week later to provide exactly what Thomas needs. And Thomas responds with the highest Christological confession of anyone in the Gospel. His is not simply a doctrinal confession, but a statement of trust and relationship: “My Lord and my God!” (20:28).

Jesus’ response to Thomas (20:29) is not a rebuke, but rather a blessing for all those who will come to believe without having had the benefit of a flesh-and-blood encounter with Jesus. Indeed, the author goes on to declare that this is the very purpose of this book, addressing all of us who have not seen but have heard this testimony: “But these are written so that you may believe that Jesus is the Messiah, the Son of God, and that through believing you may have life in his name” (20:30-31).

The Easter season of alleluias can sometimes seem to leave little room for our doubts, our fears, and our pain. We tend to forget that for the first disciples, there was fear, doubt, pain, and confusion before there was understanding and joy at what had taken place on that day. One week after Jesus appeared to his disciples, they were gathered once again behind locked doors, suggesting that Thomas was not the only one still needing reassurance that Jesus had in fact conquered death.

There are many directions a sermon on this text could take. One would be to explore our commonality with the disciples in their fear and doubt. Are we so different today, even after we’ve heard — just one week ago — that Jesus is risen from the grave? How do the anxiety and fear in our lives betray our own disbelief? A preacher could name some of the fears and anxieties that keep us locked in–as individuals and as congregations–and keep us from fulfilling the mission for which Jesus has called and sent us.

The natural thing to do when we are feeling anxious or threatened is to hunker down and lock the doors, to become focused on our own security rather than the risky mission to which we are called. The promise of this text is that Jesus cannot be stopped by our locked doors. Jesus comes to us as he came to the first disciples, right in the midst of our fear, pain, doubt, and confusion. He comes speaking peace, breathing into our anxious lives the breath of the Holy Spirit.

What is more, he keeps showing up. As he came back a week later for Thomas, Jesus keeps coming back week after week among his gathered disciples — in the word, the water, the bread, and the wine — not wanting any to miss out on the life and peace he gives. And he keeps sending us out of our safe, locked rooms, into a world that, like us, so desperately needs his gifts of life and peace.