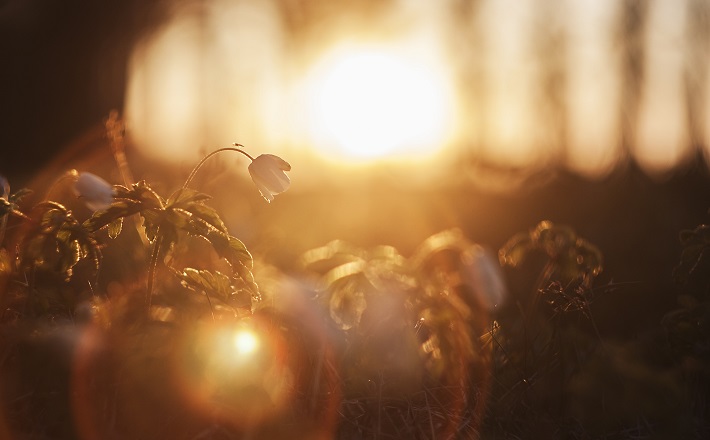 "The true light, which enlightens everyone, was coming into the world." Photo by Ilja Tulit on Unsplash; licensed under CC0.
January 5, 2020

Logos becomes an important concept in the content of John’s prologue, but it also indicates that John’s first 18 verses serve as a message before the body that is key to appreciating the full force of the story to come. As in some contemporary novels, John’s prologue is an introduction, giving background that sets up the action and helps audiences make sense of the story to come. In ancient Greek drama, which is closer to John’s original context, prologues have a further purpose: they give the mythological background necessary for understanding the events of the play.1

John’s prologue, therefore, introduces setting, previews characters, and establishes the primary themes and message of the work, all of which is information audiences have that characters in the story don’t have. It puts audiences in a privileged position as we participate in the action of the story, identifying with characters and waiting, even hoping, for them to catch on, as it were, and grasp what is at stake.

In the beginning was the Word of God (verses 1-11)

The first words correspond to the opening of Jewish scripture and bring its audience to “the beginning” of their sacred narrative of history, when God spoke creation into existence (Genesis 1-3). By echoing God’s action in history, John grounds his story in the world of Israel: “In the beginning was the Word.”

John’s choice of the Greek logos allows for rich and varied symbolism, evoking God’s revelation in Torah as well as the broader voice of the sages in the Greco-Roman milieu. John teaches that as a being of the same divine essence as God, the Word is fundamentally oriented toward union with God. The expansive reflection of God’s creative power prepares audiences for God’s revelatory action to come. The following verses present the nature and role of the logos as the vehicle for creation who is the giver of life and stands fast in the darkness, lighting the way for humankind (verses 3-5).

The final words further hint at the conflict to come between the Word who is light (Genesis 1:3-5) and the darkness that exists among people who are caretakers of God’s creation (Genesis 1:26-30). Physical threat is implicated as well as the notion of the Word already in the world, in the form of Torah, which has not been understood. Nonetheless, regarding the shining light, the darkness “did not overcome it.”

The first human is then introduced, a man named John (verses 6-8).2 The Evangelist describes him as “sent from God,” the only human character in the narrative to be identified as such. He is special, sent into the world from God with a mission. He can be trusted, and his mission is to bear witness to the light. The concept of believing in the Word is also introduced.3 John, the human witness, crucially points to the light and facilitates the journey of believing.

The Evangelist then returns to the light, now characterized as “truth” (verses 9-10). The true light whose enlightening reign reaches everyone is coming into the world. The imminent conflict of the Gospel is affirmed, now in terms of “knowledge.” The very world of which the light was instrumental in creating did not know him. Verse 11 then provides powerful parallelism to this disconnect through the intimate language of “his own.” The Word, instrumental giver of life and light in intimate relationship with God, comes into what was his own and isn’t received. Giving, receiving, and rejecting in relationship become the operative interactivity of the incarnation of the Word.

The heart of the prologue: becoming children of God (verse 12)

The audience arrives at the pivot of the prologue and the hinges upon which the pivot turns (verse 12). The force of the entire prologue is poised on the axis of the mission of the Word: “he gave power to become children of God.” The balance of verse 12 can be lost in English translations, including the RSV/NRSV. Rather, John’s syntax allows the central assertion of the Word’s giving action (verse 12b: “he gave them power to become children of God”) to be framed by the introduction (verse 12a: “but to all who received him”) and the description of the potential recipients of the gift (verse 12c: “who believed in his name”). Verse 12a builds upon those to whom the Word came (“his own,” verse 11), while verse 12b delineates the indirect object of the power the Word gives (“them”), and verse 12c characterizes “them” as “those who believe in his name.” Verses 12a and 12c are thus corresponding phrases that hinge the core assertion of verse 12b.

This central assertion, the giving of power to those who receive the Word to become children of God, is the crux of the prologue’s message to its audiences. This familial language is often used across the Gospel to describe relationship with God. Establishing childhood of God through the Son is the culmination of all God’s dealings with the world, the goal of the Creator and creation. This expressed aim affects every statement that follows.

Those who receive the Word are given power to become children of God, but how does one go about receiving him in order to achieve this status? By believing in his name.

Gift upon gift: the Word became flesh and dwelt among us (verses 13-18)

Those who believe receive the Word and thereby receive a gift, the power to become children of God. The role of God and the “how” of becoming God’s children is characterized: the husband’s will, ordinary human sexual desire, and natural descent have no avail: spiritual birth comes from above (verse 13). Heritage and race are rendered irrelevant to birth from God when the Word comes into the world.

John returns to what God did to make this possible by majestically announcing how this happened, who the Word becomes, and what he gives in the process: the Word became flesh and pitched his tent among us, and we beheld his glory, the glory as of a father’s only son, full of the gift which is truth (verse 14).4 These words announce an event long coming in the flow of the Prologue and made possible by the plan of God to re-envision the covenant people as children of spiritual, not human, birth.

Just as God’s action in the Sinai covenant and the giving of the Torah changed the nature of God’s relationship with creation, the incarnation of the Word, while very much in accord with that history, once again decisively alters the manner by which creation can relate to God. John leaves no doubt as to the full humanity of the incarnate Word with the use of flesh to describe this in-breaking of God’s action. Depicting the incarnation of the Word in terms of the shekinah, or dwelling presence of God, also preserves the Word’s divinity as a new presence of God and God’s covenantal activity in creation.

The narration shifts as John speaks inclusively from the perspective of the children of God, drawing audiences in: “We have seen his glory.” The visible and powerful manifestation of God recalls the revelation of the glory of God to Moses on Mount Sinai (Exodus 19-24; 33-34), but now this revelation is described as a father’s only son.

It concludes by proclaiming the incarnate Word to be full of “grace” and “truth.”5 If we understand “grace” as “gift,” then the Word, giver of light and life, now incarnate, is filled with a new gift, truth. The giving and receiving of this gift of truth is intimately connected to the power to become children of God.

The incarnate Word is then firmly grounded in history as the Evangelist returns to John the Baptist, the human witness sent by God whose testimony audiences can trust (verse 15). He again speaks in the collective voice of the children of God to detail the process of God’s action in creation in terms of reception of God’s gifts (verse 16).

What God has done is to give the gift (of truth) upon a gift. The nature of the new gift was introduced in verse 14 and the nature of the first gift has been behind the Word’s characterization in verses 1-5, but both are illuminated in verse 17. The law was a gift from God, and the reference to Moses ensures that the covenantal gift of Torah echoes through this proclamation.

The Prologue’s final verse returns to the beginning while illuminating the relationship of Jesus as “only son” to the Father who is turned toward that Father, now in history (verse 18). This is a new covenantal move in history. Jesus, the Word of God made human as Christ and Son, will make God known through his life and ministry.

The Gospel will narrate the how of the covenantal claim that the Prologue introduces. The new covenant gives the power to become children of God through receiving and believing the gift of truth revealed in Jesus Christ the only Son, who is in perfect relationship with God the Father.

These verses speak to a community of migrants and refugees.

Psalm 147 is one of five psalms that concludes the Psalter.1

Normally, the letters of the Pauline corpus have a thanksgiving section immediately following the salutation (Ephesians 1:2).
Print All Text Print All Commentary