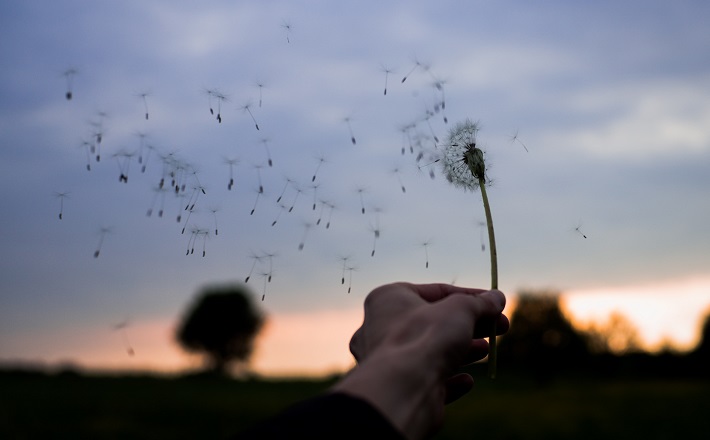 "The wind blows where it chooses, and you hear the sound of it, but you do not know where it comes from or where it goes." Photo by Oliver Hihn on Unsplash; licensed under CC0.
March 8, 2020

Two signs at Cana in Galilee form the literary frame of an instructional journey on faith. The physical movement between these events mirrors the theological journey through which Jesus brings himself as the Word of God to the world, first in a Jewish then in a non-Jewish, aka “Gentile,” setting. John also begins to portray believing as dynamic and communicative and to identify Jesus’ miracles as “signs.”

Indeed, often when folks think they “have it” and have “arrived,” Jesus challenges them further. To do so, he draws people into dialogue by “wowing” them in order to “point to” the power of God, but the revelation of God in Jesus must be anchored in his word, not the fleeting “wow” of a miraculous experience. Jesus encounters people and challenges them to move beyond comfort and religious preconceptions into a new relationship with God the Father through openness to the Son.

Each one models a believing response: positive, negative, or, like Nicodemus, an attempt to ride the fence of neutrality. Jesus, however, ultimately pushes people to decide. Each encounter also propels the plot as Jesus reveals himself and audiences venture toward his inevitable arrest, passion, and glorification.

At the close of John 2, a comment about knowing and believing leads into a dialogue instigated by Nicodemus, a Jewish leader (John 3:1-21). The hostile encounter in the temple area served to contrast the constructive encounter with Jesus’ mother at the wedding feast, but this meeting shows that all is not lost with Jewish officialdom. Nicodemus’ somewhat earthly questioning provides Jesus opportunity to teach about heavenly things, including God’s loving plan for the world and the role of the Son of Man in that plan.

Nicodemus comes to Jesus at night, attracted to Jesus’ activity, but we’re reminded of the prologue’s assertion of the world’s darkness (John 1:5). That he comes to the Light indicates his openness; however, Nicodemus proves his journey will be long as he takes time to receive Jesus’ word and relinquish preconceived religious categories.

Nicodemus approaches Jesus with what he “knows” about Jesus as “rabbi” and a focus on “signs.” Jesus accepts this, but immediately pushes Nicodemus further. Beginning with his characteristic double-Amen introduction, he teaches the necessity of “being born from above” to “see the kingdom of God” (verse 3). This term “above” comes from the Greek anothen which is also translated as both “anew” and “again.”

Jesus plays this double meaning to challenge Nicodemus to a deeper understanding of God’s work in the world. Nicodemus would be familiar with the notion of God as king, but this challenge to be born from above/again to “see” this kingdom pushes him to expand his notions of God and kingship and “see” Jesus beyond a God-sent teacher and miracle-worker.

Nicodemus shows he hasn’t grasped the spiritual intention of Jesus’ “above” when he asks about the biological possibility of being born “again.” This naive misunderstanding happens time and again across Jesus’ ministry, but allows Jesus opportunity to teach, here about the nature of the Spirit and the need to be Spiritually born to participate in God’s kingdom. The Baptist testified that the one coming baptizes with the Holy Spirit (John 1:29-34). This promise is fulfilled in the Spirit brought by Jesus. Unfortunately, Nicodemus, just beginning his journey, comes no closer to understanding and says as much. Jesus responds by shifting images to heavenly things, not unlike what he did with Nathanael early in his ministry (John 1:50-51).

Jesus teaches that the Son of Man has descended from heaven, speaks to all who listen, and gives all who receive him eternal life in the kingdom of God (verses 11-13). Just as Moses pointed out the signs and wonders of God to the Israelites after the Exodus by “lifting up” the serpent, so must the Son of Man be “lifted up” to bring this promise to fulfillment.

Jesus again makes use of double meaning: now of “lifting up” in the physical sense as Moses lifted the rod and the figurative sense as exaltation and the wonder of God. Jesus is thus able to point metaphorically to his coming crucifixion as a new sign of the power of God to forge relationship (verses 14-15). The cross is both a physical “lifting up” and an “exaltation.” Jesus then utters what encapsulates the entire gospel: “For God so loved the world that he gave his only Son, so that everyone who believes in him may not perish but may have eternal life” (verse 16).

Another Johannine theme emerges as the immensity of God’s love is integrated with the mystery of salvation. The gift of the Son is the saving power of the new covenant and available to any and all who receive and believe in him: not for condemnation, but to bring light into the world and salvation from its darkness (verses 17-18). Openness to this light and the action of God in the Son is necessary. Referring to this encounter’s introductory verses (John 2:23-25), Jesus notes the darkness in the hearts of some that leads not to light (verses 19-20). He closes, however, with a renewed hope for truth, life, and grounding in the presence of God (verse 21).

As dialogue slips into monologue, Jesus brings into the story world the promises the narrator made about him: Jesus forms new children of God through the gift of truth for all who are open to his word. This encounter concludes without resolution for Nicodemus. In coming to Jesus, he showed necessary openness, but came expecting to have what he “knew” confirmed and, thus, restricted religious categories stifled his progress. Jesus abolishes such categories and challenges those he encounters to full relationship. There is hope for Nicodemus, and audiences often identify with him, even if they sense they shouldn’t! His openness signifies that his believing process has begun but, for the rest of his story, we must press on (John 7:45-52; 19:38-42).

We do not know why this story begins with Abraham (and his family).

Why would a preacher work with these pieces of a complex Pauline argument in her sermon?1
Print All Text Print All Commentary