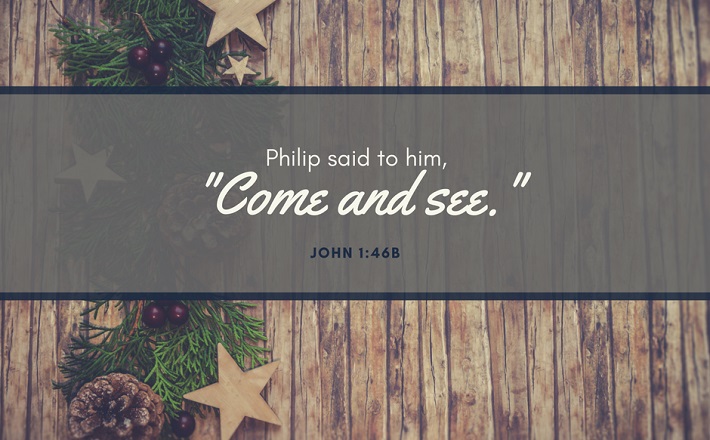 Event Jesus himself seems sort of surprised at Nathaniel’s sudden and absolute confession of faith: “Rabbi, you are the Son of God! You are the King of Israel!” (John 1:49) Jesus seems surprised since he responds with possible humor, “Do you believe because I told you that I saw you under the fig tree?” (John 1:50). It is not obvious to the reader how Nathaniel transformed from a lovely naysayer to spokesman of faith in a matter of moments.

Nathaniel seemed to approach life with a critical lens — a master of suspicion.

Nathaniel is no Mr. Congeniality.

So when this guy, who tends to see the negative, effuses this overwhelmingly positive declaration of who Jesus is, after just meeting him, the readers’ expectations are toppled. What is going on here? Has Nathaniel really just uttered a statement with two exclamation points? Inexplicable!

The drama in this story counts on the fact that this character, Nathaniel, doesn’t tend to act in this positive manner. He does not declare false positives, so if Nathaniel, of all people, confesses faith in Jesus, you can trust him because he is not predisposed to effervesce. No, his faith has overcome suspicion about Jesus.

Nathaniel is not one of those folks whose faith developed gradually. He is one who was also himself startled when the reality of Jesus snapped unexpectedly into focus. There is something about that fig tree remark that made who Jesus is clear for Nathaniel. The reader does not get to be privy to what exactly transformed Nathaniel’s view of Jesus. What is clear is that epiphanies of the Christ come to different people in such drastically different ways that it can even be incomprehensible.

This text, which falls during the season of Epiphany, is an epiphany. Epiphanies tend to transform people. This is seen in Nathaniel’s change and in an epiphany-induced change that Martin Luther King, Jr.’s describes in his book, Stride Toward Freedom:

I was ready to give up. With my cup of coffee sitting untouched before me, I tried to think of a way to move out of the picture without appearing a coward. In this state of exhaustion, when my courage had all but gone, I decided to take my problem to God. With my head in my hands, I bowed over the kitchen table and prayed aloud.
The words I spoke to God that midnight are still vivid in my memory. “I am here taking a stand for what I believe is right. But now I am afraid. The people are looking to me for leadership, and if I stand before them without strength and courage, they too will falter. I am at the end of my powers. I have nothing left. I’ve come to the point where I can’t face it alone.
At that moment, I experienced the presence of the Divine as I had never experienced God before. It seemed as though I could hear the quiet assurance of an inner voice saying: “Stand up for justice, stand up for truth; and God will be at your side forever.” Almost at once my fears began to go. My uncertainty disappeared. I was ready to face anything.1

Martin Luther King, Jr. was changed by this epiphany often referred to as his “vision in the kitchen.” Nathaniel’s epiphany, in which he suddenly could see clearly who Jesus was, changed Nathaniel, who, then, proclaimed Jesus as:

All three of these terms have the potential to bring transformative change: Rabbis through teaching and leading, The Son of God by bridging the gap between heaven and earth, the King of Israel by bringing just rule.

An epiphany of God allowed something new to snap into focus for Nathaniel. That newness changed his life.