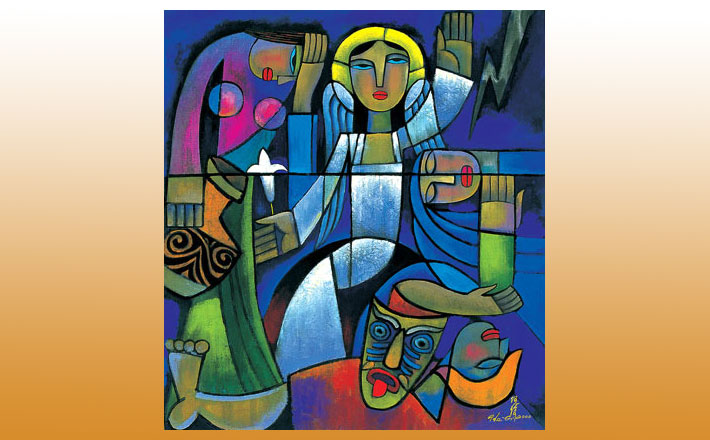 He, Qi. Easter Morning, from Art in the Christian Tradition, a project of the Vanderbilt Divinity Library, Nashville, Tenn. Original source: heqigallery.com.
April 5, 2015

[Looking for commentary on John 20:1-18? See this commentary for Vigil of Easter by Karoline Lewis.]

Instead, by the time Mary, and Mary, and Salome get to the tomb early on Easter morning (Mark 16:2), Jesus is already gone. Their worry as they approach is that the body of Jesus may be all too secure — that the large stone blocking the entrance to the tomb may be too much for them, and so prevent access to the one they have come to anoint (Mark 16:3). But upon arrival, they find that they actually have the opposite problem: Jesus is not unavailable because his lifeless corpse is locked away behind a barrier; he is unavailable because the stone is removed and he is alive and away on other business!

Strangely enough, in Mark’s telling the emptiness of the tomb is not just evidence for the resurrection. (And, when it comes to that, there are other explanations for why a tomb might be empty; see Matthew 28:13.) Instead, the accent seems to be on Jesus not being present because he has better things to do than wait around at a tomb. The “young man dressed in a white robe” (angelic messenger) delivers the good tidings of Easter morning like an administrative assistant explaining why you can’t have a quick word with the boss: “You’re looking for Jesus? Sorry, you just missed him.”

You’ve missed him because he has moved on ahead to other pressing business. The resurrected Lord has no intention of giving us time to sit around pondering whether we believe in this sort of thing or not. Instead, the instruction to the women is to tell the disciples, and especially Peter who had denied him, that they had better get on the move (Mark 16:7). Jesus had explained already that after he was raised up, he would go ahead of them to Galilee (Mark 14:28). Now the “young man” reminds them of this scheduled rendezvous. If it’s Jesus they want, they will need to head back to Galilee.

What exactly would it mean to catch up with Jesus in Galilee? Galilee is, of course, the setting of his early ministry as narrated in the first nine chapters of Mark’s gospel. When Jesus first emerged from his wilderness trials, it was to Galilee that he came with his proclamation of “the good news of God” (Mark 1:14). Galilee is the site of his ministry of teaching, healing, exorcism, and feeding such that his fame spread (Mark 1:28), and a great multitude followed him (Mark 3:7). Note that these very women who have come to the tomb at sunrise to receive this summons have just been described a few verses earlier as those who accompanied him and provided for him during his Galilean ministry (Mark 15:40–41). Is that it then? Is it back to Galilee — back to the good old days with everything just as it was, only better?

Not exactly. The Galilean ministry in the early chapters of Mark is the site of a relentless demonstration of Jesus’ profound agency and power, but it is also the site of profound misunderstanding. Even his closest followers cannot seem to figure out who Jesus is and what he is up to. So pervasive is this theme of misunderstanding, that Mark’s Jesus is constantly asking people to keep silent about him. Whether supernatural beings that know his identity (Mark 1:34, 3:12), or those to whom he is trying to impart special insight (Mark 8:30), or those who have benefited from his power to heal and exorcise (Mark 1:44, 5:43, 7:36, 8:26) — Jesus instructs them all to be quiet. The so-called “messianic secret” in Mark comes down to this: Jesus doesn’t want people spreading news about him, because they don’t yet have the full picture. His full identity has not yet been disclosed.

Jesus had tried to explain about the second act of his performed identity — the part that takes place in Jerusalem, where he is to “undergo great suffering, and be rejected…and killed” (Mark 8:31). Three times he tried to explain it (see also Mark 9:31, 10:32–34), but each time his followers made it perfectly clear that they understood nothing. Finally, he just had to show them.

So now, at Easter, this summons to Galilee is an invitation to rethink it all, to reappraise the whole story in light of its ending. It is as the “crucified one” who has nevertheless been raised (Mark 16:6) that the powerful and dynamic Jesus of Galilee can be fully appreciated at last. These two sides of Jesus — fearless, urgent whirlwind of divine power who ties up the satanic strong man in order to plunder his house (Mark 3:27) on the one hand, and passive, silent victim of arrest, abuse, mockery, false accusation, and execution (chapters 14–15) on the other — are not really reconciled in Mark. It’s a story, not a treatise. We are never shown how to logically resolve the tension between these two aspects of his identity, but Mark insists on holding them both before our wondering eyes. To really understand this Jesus you have to keep thinking both things together — and this is all the more true after the resurrection.

There is something deeply disturbing about all of this, as the women at the tomb clearly understood (Mark 16:8). But if we can recover from the shock, there is nothing for it but to do as we are told and head back to Galilee — back to the site of his ministry among us, back out into the world where we are promised that he has gone ahead of us. Whatever he is up to out there, it’s probably not what one might first suspect. We would need to know the whole story in order to know where to look for him. We would need to understand that his power is the power of a crucified one. That will have to be enough to go on as our search begins.

Psalm 118 is the last psalm in a group of six psalms in Book Five known as the “the Egyptian Hallel” (Psalms 113-118), psalms that are used in present-day Jewish life at the Passover meal on the eighth day of that annual spring celebration.

SB412 – Resurrection of Our Lord