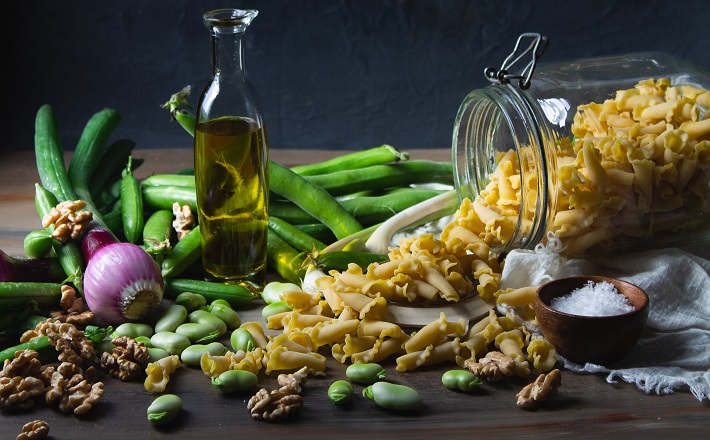 Joshua’s farewell speech is designed to reinvigorate the people’s commitment to the LORD who had delivered them from slavery and given them victory in their battles for the Promised Land. Broad resonances with Moses’ farewell speech (Deuteronomy 29-30) underline the continuity of Joshua’s authority with that of Moses and reinforce the importance of covenant renewal for the ongoing faithfulness of God’s people.

Joshua begins with a rhetorical move that would have alarmed an ancient Israelite audience: he names their origin among Mesopotamians who worshipped other gods. Joshua chooses to present their ancestor Abraham not as a venerable leader chosen to become a blessing for all the families of the earth (Genesis 12:3), nor as a steadfast believer whose trust in the LORD’s promises was reckoned as righteousness (Genesis 15:6), but simply as an outsider brought from Ur of the Chaldeans (Genesis 11:31).

While some traditions visible in Joshua 24 are not entirely consonant with Deuteronomistic concepts, it is likely that we should hear a veiled warning in Joshua’s opening line, given that worship of other gods was strictly forbidden in the Deuteronomistic worldview and given the overall force of Joshua’s speech. The Israelites are given to understand that they have come from idolatrous foreign roots; the audience thus is invited into this discourse from a position of marginality.

Because Joshua’s speech is a beautifully crafted rhetorical whole, preachers may want to take account of the intervening material that is omitted in the lectionary (verses 3b-13). A few words concerning the omitted material may help to set the stage for homiletical work with the rest of the lectionary-appointed text. The intervening verses articulate powerfully the grounds on which the Israelites should be grateful to God. First they hear of God’s gracious giving to the patriarchs: “I gave him [that is, Abraham] Isaac; and to Isaac I gave Jacob and Esau. I gave Esau the hill country of Seir…”(verses 3-4). More divine graciousness is on view in God’s sending of Moses and Aaron, as well as in God’s striking Egypt with plagues to compel the pharaoh to let the enslaved Israelites go (verse 5).

Next named is God’s protection of the Israelites during their flight from Egypt and in their battles with Canaanite armies (verses 6-12). The recital of God’s sovereignty concludes on a renewed note of gracious gift: “I gave you a land on which you had not labored, and towns you had not built … you eat the fruit of vineyards and oliveyards that you did not plant” (verse 13).

Worth noting in this material is an elegant semantic maneuver that connects the ancestors from ancient times with the Israelite audience in the present moment of the text. “They” and “you” pronouns and verbs alternate in a way that deftly interweaves the history of the ancestors with the identity of the Israelites now listening to Joshua.

The alternation is most striking in the narration of Israel’s liberation from Egypt: “afterwards I brought you out. When I brought your ancestors out of Egypt, you came to the sea … When they cried out to the LORD, he put darkness between you and the Egyptians, and made the sea come upon them and cover them; and your eyes saw what I did to Egypt,” (verses 5-7). This artful interweaving teaches the people to know themselves as constituted and preserved by God’s marvelous grace even now—fully in continuity with the redemption enjoyed by generations past.

The implied audience is meant to be utterly mastered by this rhetoric, overcome by awe and gratitude for what the LORD has done. The Israelites have been brought by God from outsider status to the status of a beloved and protected community. Led through the trauma of slavery and the terror of military conflict, Israel has finally arrived at the joy of peaceful dwelling in a fruitful land. As Joshua constructs it, this people have emerged from the fraught mists of historical memory into the rich abundance of a present in which all has been graciously provided by their invincible God. They can only rejoice to bow before a God so strong to save.

Now Joshua presses them to commit themselves anew to the LORD, thundering, “Choose this day whom you will serve!” By this point in Joshua’s magnificent speech, there is no real choice at all: Israel may serve the old foreign gods of Mesopotamia, or the shamed gods of the defeated Amorites—or they may serve the LORD, whose mighty hand and outstretched arm have brought countless generations of Israelites safely through times of brutal deprivation and fierce conflict. At the climactic moment of decision, the hero Joshua offers a stirring and unexpectedly intimate confession that invites every hearer into community with him: “… as for me and my household, we will serve the LORD” (verse 15).

What follows is an extraordinarily effective dialogue that underlines what is at risk for the believing community. First, the people affirm God’s saving power, elaborating on what Joshua had narrated with new phrases that demonstrate the depth of their understanding of their own history of redemption. They commit themselves to the LORD in no uncertain terms: “he is our God” (verse 18). But Joshua heightens the drama of the moment, emphasizing the terrible risk they face in undertaking to serve the LORD. This God will turn and consume them if their faith and their halakhic observance ever waver.

Loving and serving the LORD is possible only for those who will never again seek a different way! The implied audience knows this risk all too well, for they were watching, narratologically speaking, not only when the walls of Jericho miraculously fell (6:20) but also when the transgressor Achan and his family were obliterated from within the community (7:24-26). And so the Israelites dare do nothing other than affirm their faith in the LORD. There is only one viable way forward: to love this gracious, terrifying God who demands passionate, lifelong service with all the heart, soul, and might (Deuteronomy 6:5).

Joshua 24 invites each hearer into profound gratitude for the unmerited graciousness of God. Covenant is a matter of discerning who God has been to us and who we are called to be—this is true of Israel’s enduring covenant with God (Isaiah 40:8; Romans 11:28-29) and true of the new covenant that Christians affirm in Jesus Christ. This spiritually formative text brims with riches for homileticians.

The preacher could focus on the challenges of the spiritual journey from “foreignness” to being at home in God; or she could explore the joys and risks involved in daring to offer to God our whole selves, including our past and our future. The preacher might witness to the cost of discipleship for every believing community that is set apart from the ways of the world; or underline the powerful continuity of memory and hope linking us with our ancestors in the faith; or offer anew that dramatic moment of choice, whether understood as a pivotal conversion decision or as a continuous opportunity for every faithful person in daily living.