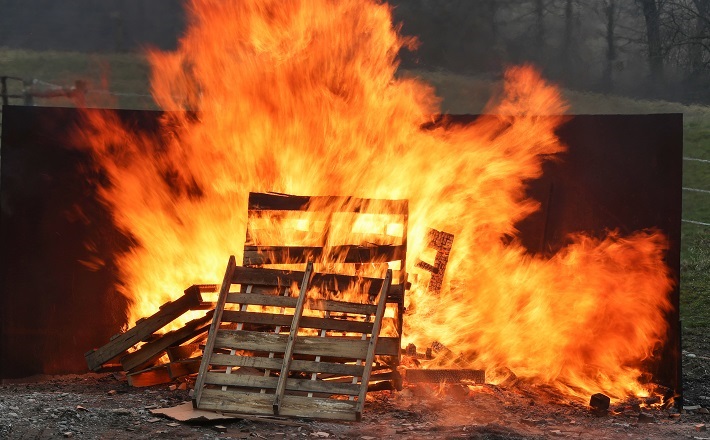 It comes near the end of a section of the book focused on issues of leadership in which God repeatedly condemns the Davidic kings, the temple priests, and the royal prophets for abusing their power (Jeremiah 21-24).

Throughout this section, God paints a picture of the community that God is trying to build: one in which people “act with justice and righteousness, and deliver from the hand of the oppressor … the alien, the orphan, and the widow” (Jeremiah 22:3). And yet to the king, God says that “your eyes and heart are only on your dishonest gain, for shedding innocent blood, and for practicing oppression and violence” (22:17). God then tells the people, “See, I am setting before you the way of life and the way of death” (Jeremiah 21:8). They must choose whom to follow. God’s desire is that “Judah will be saved and Israel will live in safety” (23:6), but for that to happen, God declares that first “this house shall become a desolation” (22:5). The “house” can refer to the royal mansion, to the temple, or to Jerusalem — all are linked in a theological and political system that Jeremiah reveals is toxic to the core.

Influential prophets like Hanahiah son of Azzur worked hard to convince the people that YHWH would soon destroy Babylon and save Jerusalem, restore the Davidic monarchy, and enrich the temple on Mount Zion (Jeremiah 28:1-4). His message is essentially royal propaganda meant to keep the people excited for Zedekiah’s reckless, death-dealing policies. Jeremiah knew that prophets like Hananiah were more interested in fulfilling their own dreams than in faithfully reporting YHWH’s thoughts. By telling the king what he wanted to hear, the prophets kept themselves both safe and prosperous. Jeremiah, on the other hand, narrowly escaped the death sentence several times for condemning the king and temple, which amounted to treason against the state (26:10-15).

This passage, Jeremiah 23:23-29, issues a scathing denunciation to the state-sanctioned prophets who deliver a fake message designed to prop up a system that exploits the weak for the benefit of the powerful. The hyper-nationalistic assumptions of these prophets construct a false god who is consumed with the success of Davidic kings and seems to care little for ethics, let alone those outside the borders of Judah. This false god allows the royal system to ignore the big picture.

Through the prophet Jeremiah, YHWH asks a rhetorical question: “Am I a God near by, says the LORD, and not a God far off?” (Jeremiah 23:23). One of the fascinating claims of ancient Israelites is precisely that their God is both near and far off, and cares about both the high and the lowly in society (see Psalm 138:6), as well as the fate of people who live outside the borders of Israel (see also Amos 9:7). YHWH is not so powerful as to be remote and uncaring for the weak, but neither is YHWH so close as to be ignorant of what happens outside of Jerusalem’s halls of power.

We know that Jeremiah criticized a widespread belief among the Judahite elite: namely, that YHWH’s presence in the temple meant that the elite could do whatever they liked without fear — because YHWH was always there to bail them out of any trouble (Jeremiah 7:1-15; see Micah 3:9-12). But Jeremiah tells the leaders of Judah that YHWH is not stuck inside the temple waiting to serve the elite — rather, YHWH is the lord of all the earth, and the one from whom no secrets are hid (23:24). God is not narrowly nationalistic, nor is God remote and disinterested. Rather, God is a sovereign committed to justice (see also 22:3), and is committed to uprooting the systems that stand in the way (see Jeremiah 1:10).

But how does one tell the fever dreams of a false prophet from the rightly spoken word of God? A true preacher tells people to “amend your ways and your doings” and “act justly one with another,” and never to “oppress the alien, the orphan, and the widow, or shed innocent blood” (7:5-6). False prophets are known for telling those in power whatever they want to hear (1 Kings 22:10-13).

In contrast to false visions of nationalistic rhetoric and human ambition, Jeremiah reminds the leaders of Judah about the fierce power of YHWH’s true word. While many voices try to make people forget God’s mission to “execute justice and righteousness in the land” (23:5), and lead them to idolatrous worship, YHWH continues to speak a word of life. In verse 28, God proposes a competition: let the nationalistic prophets spout their nonsense, and then let the follower of YHWH speak the divine word. One will be without substance and worthless like chaff, and the other will be, like wheat, durable and sustaining (see Isaiah 40:8; Psalm 1:3-4). YHWH reassures us that the divine word is active, creative, and fearsomely powerful (Jeremiah 23:29), generative enough to bring worlds into being (see also Genesis 1:3) and to dismantle systems of oppression like fire or a hammer can break down a solid building (Jeremiah 23:29; 31:28). The word of YHWH may not work on our timetable, but it is nevertheless the most reliable and powerful message in the midst of a culture of deception.

Surprisingly, after the traumatic events of the fall of Jerusalem, Jeremiah changed his tune. He offered words of comfort to the suffering people of Judah (Jeremiah 30:1-31:40). Jeremiah tells the people that a new covenant is on its way — and that with this covenant, God will inscribe divine instruction directly on the people’s hearts (31:31-34). Like a God so near, the people will know YHWH intimately, Jeremiah says, but like a transcendent God of the universe, YHWH will unilaterally forgive all their sins.

It is no coincidence that, when he was hosting his final meal, Jesus lifted the cup and reminded his disciples of Jeremiah’s promised new covenant (Luke 22:20; see Jeremiah 31:31-34). Yet again, in a time of hopelessness and desperation, a prophet called for an unexpected transformation that could only be brought about by a God who is near and yet fills heaven and earth: namely, a sudden explosion of newness and revived life amid a world that could not even imagine such a change. This is, of course, the gospel message in miniature, and it remains our proclamation today. Like Jeremiah, we remain hopeful as we wait for our shepherd to arrive and announce that the time of building and planting has come (Jeremiah 23:1-4; 31:10-14).