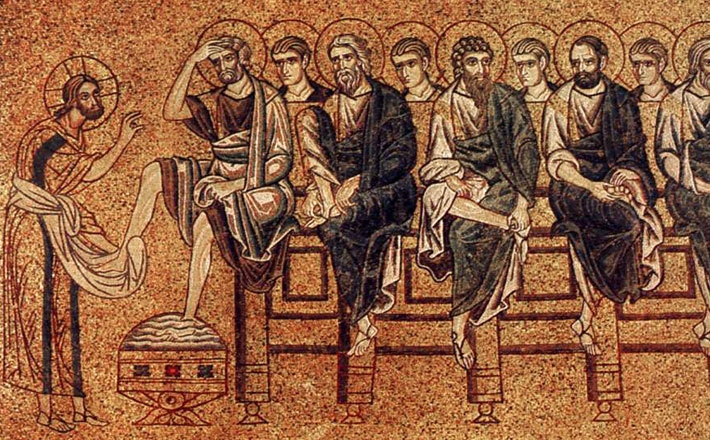 Christ washing the Disciples' Feet, from Art in the Christian Tradition, a project of the Vanderbilt Divinity Library, Nashville, Tenn. Original source.
April 2, 2015

That was my question as I began looking at these texts for the Thursday of Holy Week. You’d think I would know the answer to that question, having attended Lutheran Maundy Thursday services all my life and having taught religion and biblical languages at a college and at various seminaries.

But I didn’t know. It was of some comfort to me to learn that my wife, a smart, lifelong Lutheran and in fact the daughter of a Lutheran pastor, didn’t know the answer to the question either!

And now, thanks to some investigation and BibleGateway.com giving easy access to the Latin Vulgate translation, I have found the answer. It’s right there in the Latin translation of John 13:34, one of the texts for the day: Mandatum novum do vobis … With a silent word of thanks to a high school Latin teacher, the answer to the question became crystal clear: “a new commandment (mandatum) I give you … ” “Maundy” is derived from mandatum, Latin for “commandment.” And the text goes on, “that you love one another.”

Certainly the preacher on this occasion will read and tell the story of these “upper room discourses” of Jesus, as told in the John 13 text. At the heart of these discourses is this new commandment (mandatum novum), which advises the disciples to love one another and adds, “By this everyone will know that you are my disciples, if you have love for one another.” (John 13:35)

The preacher will also point out that 1 Corinthians 11:23-26 contains the familiar “words of institution” that are recited each time communion is celebrated. There is “something new” in this text, also. Using language familiar from Old Testament covenant making, Jesus says that he is making a “new covenant” with those present on that occasion.

Two texts for Maundy Thursday remain, each setting of the Eucharist in the context of the celebration of the Passover, that is, looking back at something old. Exodus 12 tells the story of the first Passover and provides directives for enacting and remembering it (“take a lamb … ” and “I will pass over you … ”). Now to the psalm for the celebration of Passover — and for Maundy Thursday — Psalm 116.

Psalm 116 is sung or read each year at Passover celebrations in Jewish homes to this day. The psalm is part of the collection running from 113-118 called the “Egyptian Hallel” (Egyptian praise), centering on the story of the deliverance from Egypt. Note the movement of these psalms: Psalm 113 is a model example of hymn of praise. Psalm 114 is the centerpiece of the collection, reporting the events of the Exodus, “When Israel went out from Egypt … ” As the central act of God’s saving activity, the Exodus is to the Old Testament what the Cross-Resurrection is to the New Testament. Psalm 115 then celebrates this deliverance with a call to praise. Psalm 114 thus tells the story of the nation’s deliverance from bondage and is followed by words of praise (Psalm 115:1,18). Psalm 116 now tells the story of an individual’s deliverance “ … he saved me” (verse 6) and again is followed by words of praise, in Psalm 117.

This Passover psalm also plays a part in the yearly biblical readings of Christian churches, appearing in all three ABC lectionary readings as a text for Maundy Thursday. The Psalm begins with a member of the congregation giving a testimony. In the presence of the gathered people (verses 18-19) this person tells about an answer to prayer.

An aside: in the congregation to which I belong we pray for those who are sick or mourning or otherwise in need of prayer, Sunday by Sunday. But as far as I can remember, I’ve not heard anyone stand up and say, “I know you’ve been praying for me. Now let me tell you how your prayers have been answered.” As Lutherans, it seems to me, we ordinarily leave the giving of such testimonies to our sisters and brothers in the Baptist congregation down the street.

Here the one giving testimony says, in effect, “The Lord has answered my prayer, and I’m going to keep calling on the Lord for the rest of my life!” (verses 1-2 paraphrased)

The one speaking does not give the specifics of the situation out of which he was rescued. It was what we would call a near-death experience (verse 3). As a friend of mine who has survived a brush with death because of cancer said to me recently, “I have stared death in the face!” My friend, like the psalmist, had prayed, “O Lord, I pray, save my life!” (verse 4). And now he stood there before me, very much alive!

Upon reflection, the writer tells what he has learned about God from his experiences. Here are some generalizing statements: the Lord is gracious, righteous and merciful, and watches over ordinary people. Then the psalmist summarizes: “When I was brought low, [the Lord] saved me” (verse 6).

With verse 8, the speaker addresses God directly and in verses 9-10 resolves to continue the walk of faith. Verse 11 is puzzling: does it mean that some in the congregation were not supportive of this individual during the time of trouble?

This last segment fulfills the promise to pray and praise the Lord as it was made in verse 2. Mention of the “cup of salvation” fits well with Passover rituals as well as with the celebration of the Lord’s Supper, especially on Maundy Thursday. The Eucharist is an individualization of the good news of salvation for each participant; verse 15 is an affirmation of the worth of each individual. Finally, the one praying resolves to take up a life of service. Then a final Hallelujah (“praise the Lord”) brings the psalm to a close.

This commentary was first published on this site on April 17, 2014.

His hour had come…. He loved them to the end.… You do not know now … but later you will understand.1

Passover in the Old Testament is at the heart of the Exodus experience.1