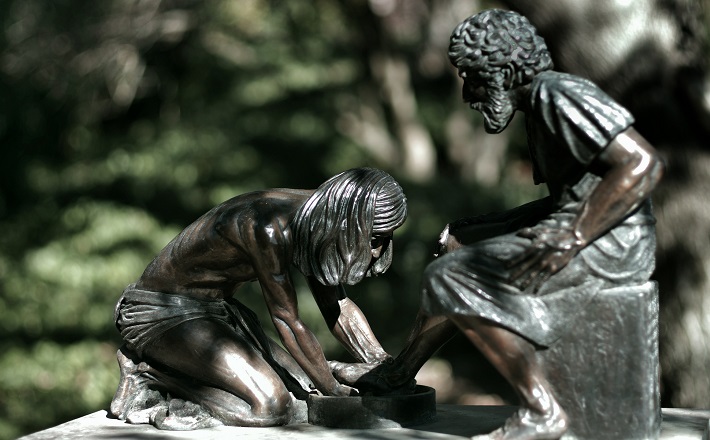 These hymns were sung by those whose earlier lament, or prayer for help in time of trouble, had been answered. Laments frequently conclude with promises to return to the temple in order to tell the worshiping community what God had done and encourage them to join the psalmist in praise of God’s goodness. These testimonies, for that is what they are, are often recognized by their characteristic past tense verbs.

Since the lament or prayer for help takes place at the time of the psalmist’s distress, the verbs employed are in the present tense: “In my distress I cry to the Lord, that he may answer me: ‘Deliver me, O Lord’” (Psalm 120:1, 2a). But, since the thanksgiving psalm narrates what God had done in response to the psalmist’s prayer for help, the verbs are couched in the past: “O Lord my God, I cried to you for help, and you healed me” (Psalm 30:2).

This general scholarly consensus on the genre Psalm 116, however, has not resulted in a clear formulation of its structure, despite such structural markers as refrains: “call on the name of the Lord” (verses 4, 13, 17), and “I will pay my vows to the Lord, in the presence of all his people” (verses 14, 18); and the repetition of key vocabulary: “death” (verses 3, 8, 15), “save/salvation” (verses 6, 13), “return” and “bounty” (verses 7, 12), and the emphatic use of “I” (verses 10, 11, 16 [twice]). Verses 10-11, 14, 15, and 16 appear to be misplaced and interrupt the flow of the psalm. For this reason, Claus Westermann, following the lead of the venerable Hermann Gunkel, has made the intriguing suggestion that these verses should be rearranged to yield the following, more typical reconstruction:

All the parts make sense in this reconstruction, but one wonders how it ever became so confused (I sense an elusive concentric arrangement, as yet undiscovered!).

Be that as it may, our passage, verses 1-2, 12-19 functions quite well as it stands; in fact, the LXX presents verses 10-19 (essentially the promise/vow) as a separate psalm entirely (Psalm 115). This intensely personal psalm (35 first person references!) begins with a loving expression of gratitude for God’s grace and answered prayer (verses 1-2) and then jumps to a vow or promise in which the psalmist wonders, “What shall I return to the Lord for all his bounty to me?” (verse 12).

It is important to realize that the psalmist does not think it possible to actually repay God in some reciprocal, you scratch my back and I’ll scratch yours kind of way. Rather, the psalmist, overcome by the grace bestowed upon him, is concerned about the relationship he shares with God and now seeks an appropriate response.

That response serves as the tie-in for Maundy Thursday. If God’s grace cannot be bought, then the temple sacrifice gives nothing to God but recognizes God’s gifts to us and allows us to participate ritually, symbolically, even sacramentally in the relationship God has forged. Judaism has celebrated their relationship with God for millennia with this psalm as part of the Hillel Psalms sung during Passover. Four cups of wine are consumed for the four verbs of redemption in Exodus 6:6-7 descriptive of God’s activity. According to the Midrash:

These are four expressions of redemption: I will bring you out—I will deliver you—I will redeem you and I will take you. These correspond to the four decrees, which Pharaoh issued regarding them. The Sages accordingly ordained four cups to be drunk on the eve of Passover to correspond with these four expressions, in order to fulfill the verse: I will lift up the cup of salvation and call upon the name of the Lord (Psalm 116:13).3

Thus, the psalm functions as thanksgiving for the deliverance Israel experienced at Passover.

Closer to home, these sentiments have been transferred to Christian worship, especially on Maundy Thursday where the institution of the Lord’s Supper is commemorated. In 1 Corinthians 10:16 Paul referred to the chalice as “the cup of blessing that we bless,” an idiom usually connected with Passover and the four cups of redemption discussed above. This led to a Christological re-reading of Psalm 116 that morphed Passover into Communion that encourages us to hear this psalm as a thanksgiving for the atoning work of Jesus on the cross. As James Luther Mays concludes,

The psalm becomes the voice of Jesus and the congregation, the one providing the cup and sacrifice, the other united by them with him in his death and resurrection.4