Good Friday is the day the church pauses to meditate on the death of Jesus. 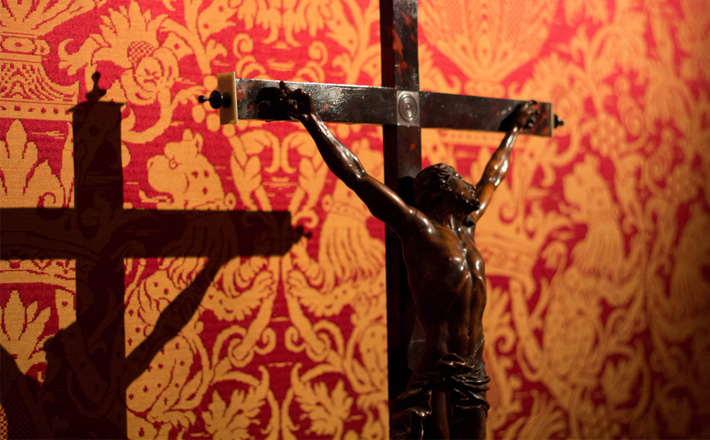 Good Friday is the day the church pauses to meditate on the death of Jesus.

It is a day of darkness. The pall of death is inevitably present. Yet this darkness also allows the power of God, usually hidden by human vulnerability, to be revealed.

Krister Stendahl (d. 2008), long-time professor of New Testament at Harvard Divinity School and later bishop of the Church of Sweden, in a homily given on Good Friday at which I was once present, compared the death of Jesus to a solar eclipse. When the moon throws its shadow upon the sun, the sun’s light is obscured and the earth is shrouded in darkness. Yet at the point of the total eclipse, the sun’s corona — its crown — though usually invisible to the eye because of the sun’s radiance, can be seen.

So too in the death of Jesus, what Luther paradoxically referred to as hidden revelation of God is clearly apparent. That is, Good Friday reveals that God is present where one would least expect — on the cross, or in moments of weakness, in our vulnerability, our suffering unto death itself (cf. 2 Corinthians 12:9). The deep irony of Good Friday, of course, is that this truth regarding God’s power was experienced by Jesus himself. As Paul says succinctly in 2 Corinthians 13:4: “He was crucified in weakness.” Such is the theological territory that underlies today’s second reading from Hebrews.

As 4:15 declares, “we do not have a high priest who is unable to sympathize with our weaknesses.” Or as Gregory of Nazianzun put it, “That which he has not assumed, he has not healed.” God intimately understands our frailty — from the inside out. Such weakness is not an impediment to God’s ability to bring life out of death. In fact, God’s power is known only when the depth of our weakness is acknowledged.

Hebrews’ meditation on God’s grace-filled accommodation to human weakness is subtly brought out in its distinctive “high priest” Christology. Interestingly, the priestly figure that Jesus is identified with is the mysterious Melchizedek, mentioned only twice in the Old Testament. The first occurrence is Genesis 14:18 where he is described as king of Salem (who brought out bread and wine) and “priest of God Most High.”

The second text where Melchizedek appears in the OT is Psalm 110:4, the one Hebrews quotes at 5:6: “You are a priest forever, according to the order of Melchizedek.” Though Melchizedek is introduced in 5:6, one must wait until chapter seven of Hebrews for the full significance of the typos to be revealed. There, Hebrews, pursuing a close (and maximalist!) reading of the OT texts dealing with Melchizedek notes that he is, “Without father, without mother, without genealogy, having neither beginning of days nor end of life, but resembling the Son of God, he remains a priest forever.” That is, Melchizedek is eternal — without birth, without death.

Though this reading of the OT texts on Melchizedek might strike us as odd, what is critical to note is that Jesus, unlike Melchizedek, does die. Our high priest, the one who intercedes for us before God, knows that which is most characteristic about the human condition: suffering and death. That our God is not above death, but has passed through it — actually has been killed — is at the heart of the Christian confession. It remains as scandalous today as it was in the first century. As Hebrews put it (2:9): “Jesus, …for a little while was made lower than the angels…so that by the grace of God he might taste death for everyone” (cf. Philippians 2:6-7).

This text has generated a variety of theological questions, two of which may be helpful to discuss within the context of Good Friday. One is the claim of 4:15 that Jesus, “who in every respect has been tested as we are, [was] yet without sin.” What does it mean that Jesus was without “sin”? And, if so, how was he “like us”? The second question responds to the statement in 5:7 that in his prayer “to the one who was able to save him from death… he was heard because of his reverent submission.” But did not Jesus die?

In North America we have a tendency to equate “sin” with moral indiscretions — we lie, we steal, we cheat, we yell at our kids or our spouse, we are self-absorbed, or we are prideful as to our ability to skirt most of these issues (i.e., we take the moral high ground and distance ourselves from other “sinners,” falling to the sin of pride). Try as we might, we cannot shake ourselves free from our bondage to such “sins”. Though NT theologians are aware that such sins consciously committed are problematic, primarily because they tend to destroy human community, they are not the focus of much theological reflection. That is because the conscience intervenes (if working) to convict us of our guilt in such cases.

“Sin” (with a capital “S”) is something both more fundamental and subtler than such sins of commission or omission. Sin is, simply, unbelief in the goodness and mercy of God. Our primary Sin, as the Genesis story about Adam informs us, is that of disobedience, a disobedience that flows from our doubt that the limitations that inevitably come with being creatures (rather than God) are limits best respected.

So, when Hebrews says that Jesus was like us “yet without sin,” it intends to underscore Jesus’ human obedience, Jesus’ faithfulness to God during his passion and death. Hebrews’ insight is that against all evidence to the contrary, Jesus continued to have faith in the goodness and mercy of God even on the cross. In fact, such is the very definition of faith in Hebrews: “Faith is the assurance of things hoped for, the conviction of things not seen” (11:1).

The second crux of this passage is tied up with Jesus’ prayer for salvation to “the one who was able to save him from death,” and yet he dies. Does this not mean that Jesus’ prayer went unanswered?

God does save Jesus “from death,” though not in any simple way. Jesus dies, as we all shall. Yet the promise of the gospel is that death does not have the last word. God is able to bring life from death. Jesus is resurrected. This Christian perspective on death is of importance not only as we contemplate our own deaths, but as we come up against the power of death-dealing forces in our lives, day by day. These are the forces that often seem to have the upper hand in beating us down, of robbing us of hope, of energy, of goodness of spirit, of kindness.

For Hebrews, the power of these henchmen of death has also been destroyed on the cross. As Hebrews puts it, “Since, therefore, the children [i.e., you and me] share flesh and blood, Jesus himself likewise shared the same things, so that through death he might destroy the one who has the power of death, that is, the devil, and free those who all their lives were held in slavery by the fear of death” (2:14-15).