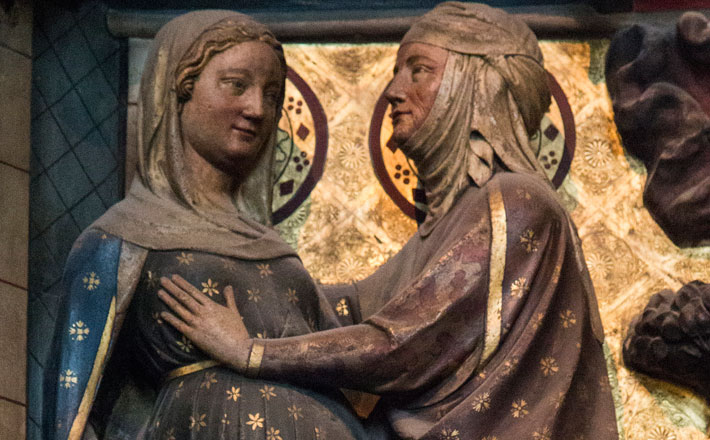 In certain times and places, she has been exalted to a status approaching that of deity, such that some medieval theologians even began to speak of a Quaternity rather than a Trinity.

In sharp distinction to such excesses, Protestants have tended to ignore Mary’s role in the drama of salvation history. In America today, there are lots of Protestant churches named St. Andrew’s, St. Mark’s, and St. Stephens, but very few named St. Mary’s (though by any objective analysis, Mary plays a far more important role in biblical accounts than Andrew, Mark, or Stephen).

Still, Mary’s memory is cherished in certain ways, especially around Christmas time. Many have taken her to be a model of motherhood. Recently, she has been valued more generically as a woman. Indeed, she sometimes becomes a role model for feminist identification: Mary the Virgin has known no man; she is her own person, unexploited; her identity is not given to her by any male, but is her own, a gift from God.

Looking at the Bible, we see another image. The evangelist Luke does not exalt Mary as a goddess, or as a mother, or even as a woman. He thinks she has a more important role, as the ideal Christian. In the Third Gospel, Mary becomes the model for Christian discipleship, the person who all people, men and women alike should emulate, especially if they wish to follow her son.

This aspect of Mary is easily overlooked, perhaps because it is only found in Luke’s Gospel. In Mark, her most memorable appearance may be the account in which she and her other sons come to take Jesus home, thinking the boy has gone off his rocker (Mark 3:21, 31-35). She doesn’t fare too much better in Matthew (though now she is present at the empty tomb). John never mentions her by name and Paul makes no mention of her at all.

But in Luke, Mary is the most Christ-like human being in the story. Her words to the angel, cited in this week’s text, are a direct parallel to what Jesus later prays in the garden: “Let it be with me according to your word” (Luke 1:38) = “Not my will but yours be done” (Luke 22:42). In both cases, the ideal response to God is presented as a combination of humble trust and obedient service.

Taken as a whole, Luke 1:26-38 is similar to some Old Testament texts in which there is a divine annunciation of a special birth: of Ishmael in Genesis 16:7-13; of Isaac, in Genesis 17:1-21, and again in 18:1-15; of Samson in Judges 13:2-25. Such parallels might suggest the real focus is not on the person to whom the announcement is made but on the child who is to be born: he will be great; he will be called the Son of the Most High; he will be given the throne of David and will reign over the kingdom of Israel (Jacob) forever (Luke 1:32-33).

The latter parallel suggests what many readers seem to intuit: the focus of this pericope is actually more on Mary than it is on Jesus. Mary is being called to a prophetic task; bearing and raising Jesus is that task. Some scholars have even said that in this pericope, Luke presents Mary as a prophet and Jesus as her oracle.

Luke wants to make sure we know why she is favored and blessed. Her kinswoman Elizabeth says, “blessed is she who believed that there would be a fulfillment of what was spoken by the Lord” (1:45). Notably, she is not blessed because she is going to be the physical mother of Jesus, but because she believed God’s word. So, whatever blessing accrues to Mary is one we all can share, if we emulate her. We cannot all be physical parents of Jesus, but we can believe God’s word will be fulfilled.

This may seem a bit pedantic, but it was sufficiently important to Luke that he brings it up again — and again. In Luke 8:21, Jesus tells a crowd of people, “My mother and my brothers are those who hear the word of God and do it.” His earthly family is to be complimented for their faithfulness to him, but all people may be members of his family if they trust the word of God as his mother and brothers do (there is no indication in this Gospel that Jesus’ family did not believe in him).

Finally, look at Luke 11:28-29. Here, Jesus is teaching a crowd or people when a woman calls out, “Blessed is the womb that bore you, and the breasts that nursed you.” This is a colorful way of saying, “How blessed to be your mother.” This woman thinks it would be wonderful to be Jesus’ mother because Jesus is a great man and the worth of women is often determined by the quality of sons they produce. Jesus completely rejects this (sexist) ideology and declares, “Blessed rather are those who hear God’s word and obey it!”

Jesus is saying, “My mother is blessed, but not because her womb bore me or because her breasts nursed me! She is blessed because of her devotion and faithfulness to the word of God.”

So Mary turns out to be not simply the mother of Jesus but an ideal role model for all followers of Jesus: a servant of God who embodies faith and faithfulness.