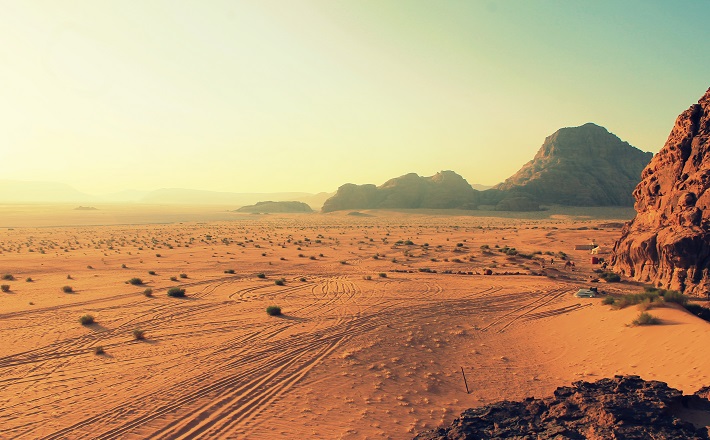 The psalm opens in verses 1-3 with  an instruction to the people to give thanks to God because God, in goodness and steadfast love (hesed), has redeemed them from the hand of the oppressor and gathered them in “from the east and from the west, from the north and from the south” (verse 3) — from all points of the compass.

These words would have been particularly poignant to the people of Jerusalem in the postexilic period. After fifty years of captivity in Babylon, they had indeed been “gathered in” by God to their ancestral home.

Four groups of people appear in stories, brief vignettes, narrated in verses 4-32 of Psalm 107. Together they represent, perhaps, the “redeemed of the LORD” mentioned in verse 2. Verses 4-9, “from the east,” tell of a group of wanderers, lost in the desert, who finally arrive at their destination. Verses 10-16, “from the west,” relate the story of prisoners who are set free. Verses 17-22, “from the north,” tell of “sick” persons who are healed. And verses 23-32, “from the south,” are about a group of sailors who are saved from shipwreck.  Each vignette follows a precise format:

In each vignette, the “prayer to the Lord” and the “expression of thanks” are identical

They will give thanks to the Lord for his steadfast love (hesed) for his wondrous works for the children of humanity (verses 8, 15, 21, 31).

The repetition of words in the vignettes provides further evidence that the psalm was most likely used in a liturgical setting, in which groups of worshipers recited the words of Psalm 107 antiphonally with presiding priests.

Are the four vignettes actual accounts of deliverance by the Lord sung in celebration at a festival? Or is the psalm purely a literary composition, with the four groups representing, in the words of James L. Mays, in his 1994 Psalm commentary in the Interpretation series, “all those who have experienced the redemption of the Lord”? Whether the vignettes narrate real events or are metaphoric examples, the words of Psalm 107 are heartfelt words of celebration of divine deliverance.

Verses 17-22, the focus of this lectionary reading, comprise the third vignette of Psalm 107, narrating the story of those redeemed “from the north.”  The verses speak of ones who were “sick because of their sinful ways, (who) because of their iniquities endured affliction.” The word translated “sick” in the New Revised Standard Version (from the Hebrew root ‘awal) actually means “foolish ones.” The people of the ancient Near East associated sickness with foolishness or sin and understood it as God’s punishment for sin (see Psalms 32:1-5 and 38:3, 5).

In the books of the prophets, the north, the third direction mentioned in 107:3 — and, thus, the direction from which the affliction originated in the third vignette of Psalm 107, was often depicted as the direction from which the punishment of God came to the ancient Israelites. The prophet Jeremiah saw “a boiling pot, tilted away from the north” of which God said, “out of the north disaster shall break out on all the inhabitants of the land” (1:13-14). In Ezekiel 9, God summons the executioners of Jerusalem and they “came from the direction of the upper gate, which faces north” (9:2).

In the midst of their oppression, the ones who are “sick” cry out the Lord, and the Lord sends comforting words and rescues from the pits. The rescued ones then offer sacrifices of thanks and recount God’s deeds with shouts of joy. When thank sacrifices were offered to God in ancient Israel, the priests and the worshippers shared in a communal meal of gratitude for God’s goodness. Thus those who had abhorred food and arrived at the gates of death taste life-giving nourishment once again.

The Israelites wandering in the wilderness after escaping from Egypt constantly complained of a lack of food and water.  In Numbers 21:5, they say to Moses, “Why have you brought us up out of Egypt to die in the wilderness? For there is no food and no water, and we detest this miserable food.” Perennial complaining — we can all identify — resulted in a plague of poisonous snakes. The remedy was an icon, a reminder of their God, who could deliver from any threatening circumstance, whether poisonous snakes or lack of food and water.

We may never find ourselves literally wandering in a desert wasteland (Psalm 107:4-9), forced to dwell in a place of deep darkness (Psalm 107:10-16), sick to the point of death (Psalm 107:17-22), caught in a tumultuous storm at sea (Psalm 107:23-32), or confronted by poisonous creatures who threaten our lives (Numbers 21:6), but each of us have faced or will face those times when we need desperately the redeeming hand of God.

Psalm 107 gives us insight into how to handle those times: Recognize the situation you are in; cry out to God and tell God what you need; accept the deliverance that God brings; and then give thanks to God. And in the end, remember that God, not any earthly strength or power, can provide a “habitable” place for us and allow us to live the good life that God has given to us.

But we must never forget that those of us who have ample resources and strength are called to be the arms and legs, the hands and feet, the voice of God in this world. God will redeem from the east and the west, from the north and from the south; but the redemption of God often takes human form. And isn’t that what Lent is all about?