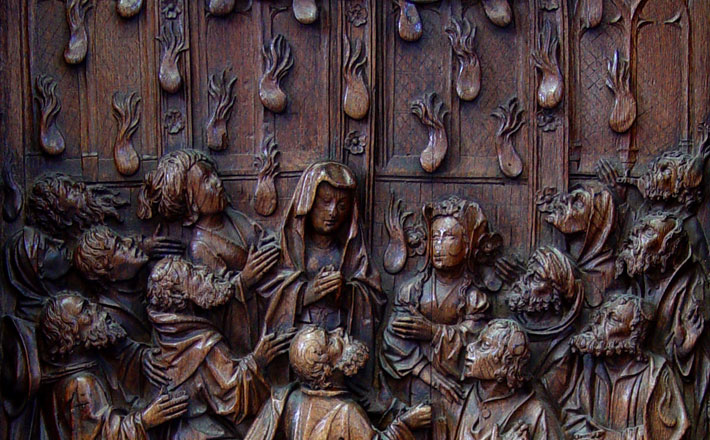 If he is correct or even close to being correct, then Psalm 104 may be more important now than it ever has been in its centuries of existence. In a word, McKibben’s proposal for beginning to move toward solutions for environmental devastation is this: “Humility, first and foremost.”2 McKibben supports his proposal with a careful reading of the Book of Job; but Psalm 104 also supports his proposal, because Psalm 104 puts humankind, as it were, “in its place.” To be sure, biblically speaking, humanity occupies a special place in the created order, but not the only place! Psalm 104 is an eloquent reminder that we human beings share our space with a vast array of God’s “works,” including an “earth … full of your [God’s] creatures [or “creations,” according to the Common English Bible]” (v. 24). Humility is in order!

The lection begins with v. 24, which has been preceded by a poetic cataloguing of some of God’s “works” — the heavens, the clouds, the wind, the waters, the mountains, the valleys, springs, the hills, wild animals, birds, plants, rocks, moon, sun, and finally, “People” (v. 23). It might be possible to conclude that since people occupy the final position in this cataloguing, humanity is the climax of creation (as in Genesis 1). But the context does not seem to support such a conclusion. There is no elaboration upon humanity’s status or vocation — no “image of God” here. Rather, the poem moves immediately in v. 24 to a celebration of the multiplicity of God’s “works.” Humans are one among “all” that God has made. In the cataloguing itself, it is noteworthy that “The trees of the LORD” are mentioned (v. 16), but we hear nothing about “the people of the LORD.” Again, humility is in order!

Following the expansive exclamatory celebration of v. 24, attention turns immediately to the sea and “creeping things innumerable” (v. 25). There is still no elaboration upon the human being. While human-made ships are mentioned, we hear nothing about sailors. So again, humility is in order!

Not surprising, given the mention of the sea, is the appearance of Leviathan (v. 26), the mythic sea monster that often symbolizes the threat of chaos. But here, Leviathan’s image has been altered. Leviathan is no threat at all; he just plays in the water. Or, if one renders v. 26b as it could be translated, “and Leviathan that you formed to play with him,” then perhaps God’s image (at least as traditionally understood) has been altered! God is not only a master worker, but also a playful creator. This rendering would suggest perhaps that v. 26b anticipates the psalmist’s request in v. 31b, “may the LORD rejoice in his works.” God really does enjoy the world, the whole creation in all its manifold and majestic fullness. Yes, this includes people; but God also enjoys all those other creatures and features of creation, even Leviathan! Humility is in order!

Provider for and Sustainer of All

As Psalm 104 moves beyond v. 26, God is celebrated not only as creator, but also as provider and sustainer. “Food” and “good things” for “all” (vv. 27-28) derive from God’s beneficent care (see also Ps 145:15-16). Food, of course, is a basic necessity of life; and another basic necessity is in view in vv. 29-30 — air or “breath” (or “spirit,” New Revised Standard Version Bible). Human beings breathe about once every five seconds. On the one hand, respiration (that is, re-spiriting) can be understood as a natural process. But for the psalmist, the breath of life is construed fundamentally as a divine gift. The final line of v. 30 suggests that every breath we take is a new creation! Our existence and the ongoing existence of the world are grounded in God’s commitment to and enjoyment of life. Imagine what difference it might make if we viewed every bite of food we eat and every breath we take not simply as natural processes, but also as gifts. We would be a lot more inclined to gratitude and humility!

And this is the direction that the psalmist is moving as Psalm 104 concludes. Humility is evident is the psalmist’s desire to please God rather than self (v. 34), as well as in the psalmist’s invitation to his or her self to “Bless the LORD” (v. 35). The word “bless” connotes not just praise, but also submission — that is, a humbling of the self. But praise is present too. The psalmist cannot keep from singing (v. 33), and it is appropriate that the first hallelujah (“Praise the LORD!) in the Book of Psalms concludes Psalm 104. The psalmist’s celebration of life as a gift yields a life characterized by humility, gratitude, joy, and praise.

What Psalm 104 may help us contemplate and appreciate is that humility, gratitude, joy, and praise are, properly understood, ecological activities! Or at least, they are the foundation for ecological sensitivity and action, for they motivate us to love and enjoy the creation in all its majesty and multiplicity as much as God loves it and enjoys it. To love and enjoy the world will naturally mean “to serve it and preserve it” (Genesis 2:15, a better translation than NRSV’s “to till it and keep it”).

The use of Psalm 104 on the Day of Pentecost derives largely from the word “spirit” in v. 30, but the connection is deeper than a mere catchword. Rather, it suggests that the ongoing life of the church is a divine gift from the same God who energizes the ongoing life of the world. The theological effect is to inject an explicitly creational dimension into our thinking about the church. The birth of the church meant and means the ongoing existence of a community that knows that it owes its life to God, and that is called to share that good news. The church will be not just in the world, but for the world, including “all” that God has made (v. 24). Perhaps the Day of Pentecost should also be called the church’s Earth Day!