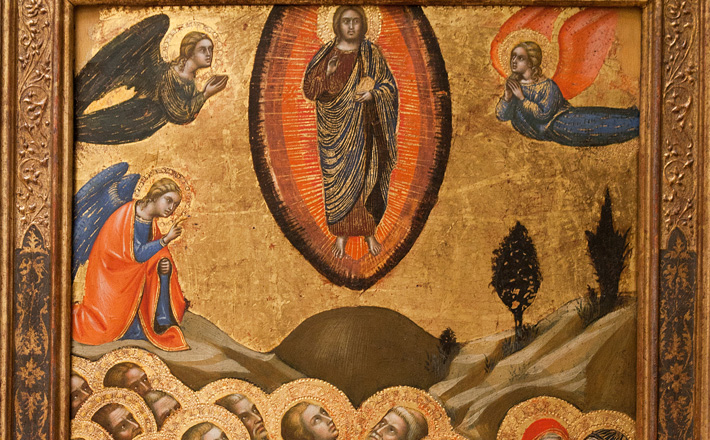 The psalm also portrays a procession for the purpose of celebrating God’s kingship. This is most evident in the declaration that God has “gone up” with shouts and trumpet sound (verse 5) and now sits enthroned over the nations (verse 8). Such language makes the psalm appropriate for the Sunday the church celebrates Christ’s ascension. The church claims that “God rules the world and lovingly claims all the world’s peoples” through the work of Jesus Christ.1

Psalm 47 is often discussed in relation to other psalms that speak of God as king or of God reigning over the world. Psalms 93 and 95-99 all contain similar language. Scholars sometimes refer to these psalms as “enthronement psalms” because they speak of God taking a throne or assuming the place as king over the universe. Several points are important to clarify what these psalms are saying by this language.

First, divine kingship has to do with God’s sovereignty over both the created order (the non-human realm) and the forces of history (nations, peoples). Psalm 47 does not say explicitly that God controls the forces of nature. This idea, however, stands behind statements about God’s control of the nations. As king, God first put the forces of chaos in their place. The unruly waters produced fear for ancient people (see Genesis 1:6-10). The threat of enemies was often described as the threat of agents of chaos (Exodus 15:8).

Second, it is important to recognize that all people of the ancient Near East spoke of their chief deities as kings. So, when Psalm 47 speaks of God this way it is saying indirectly that God reigns over the world, but Baal, Marduk, and other gods do not. Furthermore, Israel’s neighbors all had stories about their deities becoming king through battles with other gods. The poetry of these other nations (like Israel’s psalms) often depicted the god’s enthronement, their becoming king. Psalm 47 and similar psalms in the book of Psalms, however, rest on the assumption that Israel’s God always was king.

The psalm twice summons worshippers to praise (verses 1 and 6). Following both calls to worship are sections that give the content of the praise called for (verses 2-5 and 7-10). The particular focus of God’s kingship, and the reason for praise is God’s control over the nations and God’s special care for Israel. God’s care for Israel, however, is for the purpose of including the nations also in God’s grace. Indeed, verses 1-4 declare God’s sovereignty over all the earth by calling all peoples (NRSV) or nations (NIV) to praise God (47:1).

Verses 3-4 speak particularly about how God acted on behalf of Israel; God “subdued peoples” under Israel. Here the special place of humankind is summed up in Israel. Just as God placed all living things “under the feet” of humans (Psalm 8:7), so God placed all nations under Israel’s feet. In other words, God in God’s sovereignty made Israel sovereign over other nations. The “pride of Jacob” seems to refer to the gift of the land (see Amos 6:8). God gave a special territory to Israel as its inheritance.

The point of Psalm 47:4, however, is not really that Israel is superior to other nations or that Israel has rights to the land of Canaan. Rather, the point is that Israel did nothing to earn its “heritage” or any of the blessings it enjoys. God gave these privileges to Israel. Therefore, Israel cannot boast of anything.

The word selah comes between verses 4 and 5 and is not really part of either verse. No one knows exactly what this term means. It is not even certain which Hebrew root gives rise to the word. When the psalm was performed selah may have signaled the people to bow down, shout, clap or otherwise express joyful praise. Or the word may have been a key to the musicians, meaning essentially “hit it!”

Whatever the word selah meant to those who first heard it, in Psalm 47 the term sets verse 5 off from the previous verses. It marks a transition and highlights verse 5 as the climax of the first section of the psalm. Verses 2-4 praise God as king and recall what God has done in the past. Verse five also speaks about God’s kingship, but it highlights something that likely occurred at the time the verse was spoken in worship.

“God has gone up” probably has in mind a ceremony in which the ark of the covenant was taken into the temple or sanctuary (see the statement in 2 Chron 36:23 regarding the return of God and worshippers to Jerusalem, “let him go up”). Many other psalms likely have such a ceremony in mind. For example, Psalm 24 speaks of a procession into Zion and the temple that was probably like the ceremony that stands behind Psalm 47.

Verses 6 and 7 say five times “sing praise,” each occurrence using the same Hebrew word. The term used here is from same root as the word most commonly translated “psalm” (though the word at the end of Psalm 47:7, translated “psalm” is a different word in this case!). The reason for praise (and the content of praise) is stated in first half of verse 7: “God is the king of all the earth.”

Those who belong to God include the foreign nations and their leaders. The “shields of the earth” essentially refers to the same people as the term “princes” (47:9). Although there is some disagreement about the meaning of verse 9 it seems to make the remarkable statement that these leaders and their people gather with Israel and are identified also as “the people of the God of Abraham.”