Rescue at the Sea

The long walk to freedom, to paraphrase Nelson Mandela, is frequently difficult and almost always confusing. 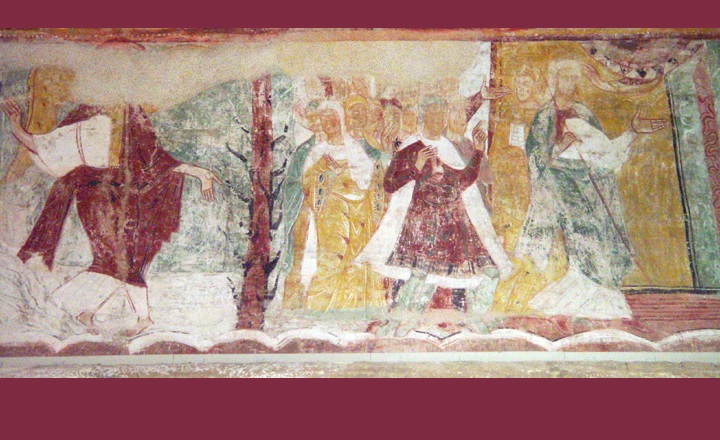 The long walk to freedom, to paraphrase Nelson Mandela, is frequently difficult and almost always confusing.

The redemption of the Israelites from Egypt may seem straightforward as we read it, but the human experience as presented in the narrative was deeply confusing. Considering the experience of the Israelites helps provide solace and empathy for so many of us on our own messy and confusing journeys.

The Israelites, meanwhile, were convinced that Pharaoh had set out to exterminate them. They told Moses that it would have been better for them to grow old in slavery and be buried in Egyptian graves rather than to die that day in the wilderness (Exodus 14:11-12). Moses, their great leader, told the people that they need only stand still, however, and see the saving work that God would do on their behalf (Exodus 14:13-14).

In my second-favorite verse in the whole Bible, God reversed the seemingly wise guidance of Moses. “Why do you cry out to me? Tell the people to move forward” (Exodus 14:15). God had heard enough crying out (Exodus 2:23, 14:10). God did not want the people to stand still and watch, as Moses had said. Instead the people were to move forward into an uncertain future!

Imagine how confused the people would have felt. They were free and rich, only to be threatened again by the same violent system that they thought they had left behind forever. Their leader told them to stand still and watch how God would free them again. Moments later, however, they were told to march toward an unseparated sea. The reversal from certain freedom to certain death had been sudden and shocking. The people must have been crushed with despair.

At that moment, God reversed Godself. Previously the people had been led by a pillar of smoke by day and a pillar of fire by night that never left its place in front of the community (Exodus 13:21-22). Now the pillar shifted to the rear of the camp between the Israelites and the Egyptians and gave forth both darkness and light (Exodus 14:20). Rashi, a medieval Jewish commenter, argued that the cloud emitted blinding darkness for the Egyptians and light at night for the Israelites (Rashi Exodus 14:20: “– and there were clouds and darkness … and it illuminated).1

The Israelites proceeded through the sea at night, with the water piled up as walls to their right and left. The only source of light was a giant pillar of fire behind them. Again, consider the human experience of the narrative: to their right and left walls of watery death, behind them the holy fire that they had counted on to lead them, and in front of them only uncertainty and their own shadows.

In the darkest hours of the night, the pillar of cloud and fire stopped separating the Egyptians and Israelites, and the army plunged into the sea after the chosen people. In the midst of the sea, God threw the Egyptians into confusion (Exodus 14:24). This confused army, stuck on the floor of the opened sea utters first unambiguously clear statement in this confusing narrative: “Let us flee from the Israelites, for the LORD is fighting for them against Egypt.” Before they had a chance to flee, God commanded Moses to stretch out his hand over the sea, and it returned to normal, drowning the Egyptians. The Israelites were finally free.

There were so many confusing reversals in the process of being freed. An ancient Jewish commentary compares the rescue at sea to a man walking alone with his son in a dark night. They walked single-file to remain on the narrow road. When the man sensed a thief ahead, he moved his son behind him to protect him. When the man sensed a wolf behind them, he moved his son in front of him. When both a thief and a wolf approached at the same time, the man put his son on his shoulders to protect him from both threats (Mekhilta d’Rabbi Yishmael 14:19). The son, no doubt, felt confused at being jostled back and forth by his father, though he trusted his father to keep him safe on the dark path.

As we walk along the uncertain path of this life, God’s leading can be deeply confusing. Make no mistake, God calls us all to freedom from sin and death, including freedom from structural sin, like the Egyptian slavery. But sometimes the path is confusing, and our act of faithfulness is to stop standing still and crying out and instead to move forward into what the LORD is doing.

God of salvation, you rescued the Israelites at the edge of the Red Sea. Rescue us from the things of this world that threaten our lives and livelihoods, so that we might forever place our trust in you. We pray these things in the name of Jesus Christ, our Savior and Lord. Amen.

Assistant to the Bishop for Emerging Ministers & Ministries

Indiana-Kentucky Synod of the ELCA

The long walk to freedom, to paraphrase Nelson Mandela, is frequently difficult and almost always confusing.
Print All Text Print All Commentary

Narrative Lectionary 327: Rescue at the Sea