In reading the story of Joseph in Potiphar’s house, in which Potiphar’s wife tries to force Joseph, a high-ranking servant in the household, into a sexual relationship, we may feel that we are reading the script for the next episode of “House of Cards.”1 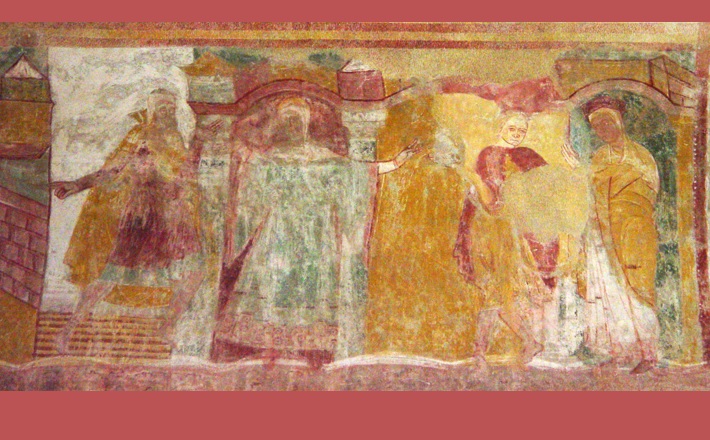 In reading the story of Joseph in Potiphar’s house, in which Potiphar’s wife tries to force Joseph, a high-ranking servant in the household, into a sexual relationship, we may feel that we are reading the script for the next episode of “House of Cards.”1

In the corridors of the mighty, lust and corruption are rampant, destroying lives and deforming governmental structures so that the powerful accrue more power and the innocent are incarcerated.

Joseph is purchased by Potiphar, “a captain of the guard,” from the Ishmaelites, then is installed as an overseer in Potiphar’s house. The story emphatically repeats that God is active in Joseph’s life, making him successful in all his undertakings (Genesis 39:2, 3, 5, 21, 23). Potiphar, noticing his success, wants it to rub off on him and his household and so raises Joseph into a position of power within his household. Potiphar’s wife is also attracted to the success that emanates from Joseph. She uses her position to try to compel him to do her will, and when rejected, has Joseph put in prison.

Shows like “House of Cards” both reflect our current reality and shape that reality. In American politics those at the apex of power today may well stumble tomorrow, land in the pit of disgrace, only to rebound back into power after a decent interval. In this sense, Joseph’s story is a familiar one; it is replete with imagery of ascent, descent, and return to the heights of power. Even the scourge of human trafficking, exemplified in Potiphar’s purchase of Joseph, is still a feature of twenty-first century life.

A key difference between Joseph’s story and politics today is Joseph’s integrity. Most of the politicians who fall from power today do so because of their own failings, their own capitulation to corruption, greed, and lust. Joseph, on the other hand, falls from power because he dares to say “No” to corrupting power. He could have had a sweet deal, sleeping with Potiphar’s wife, running his house — Potiphar didn’t need to know. But he decides to take the difficult path — and it leads him to prison.

Joseph’s “No” is reminiscent of Vashti’s “No” in the book of Esther, and also of Hagar’s “No” to Abraham and Sarah’s abuse in Genesis 16. All of these characters reject powerful forces that would subject them to degradation, and all pay a price for their integrity. Joseph and Hagar are vindicated by divine favor, but it does not lessen the real cost to them personally.

In September 2001, US Representative Barbara Lee of California was the only person in the entire U.S. Congress — House and Senate — to vote against the Authorization for the Use of Military Force after 9/11. She did so because she believed that its blanket authorization to use force against “those nations, organizations, or persons [the President] determines planned, authorized, committed, or aided the terrorist attacks … or harbored such organizations or persons” would lead the United States to become the evil which it sought to destroy. The broad scope of the law, authorizing all kinds of actions in the world, led to the war in Iraq, Guantanamo Bay, and the use of “enhanced interrogation” techniques widely understood to constitute torture. Barbara Lee was inspired to vote “No” by the biblically informed prayers she heard at the National Day of Remembrance on the day of the vote. The reward for Barbara Lee’s “No” was an avalanche of death threats. Yet God was active in her decision-making that day, though her actions appeared futile in the moment.

Joseph gets to prison because of his clothes. Or, more precisely, someone taking his clothes. History repeats itself, at least in poor Joseph’s life: earlier his brothers threw him into a pit/prison, taking his fabulous garment in order to convince Jacob that his beloved Joseph was dead. Now Potiphar’s wife takes Joseph’s garment (his clothes betray him!) in order to perpetuate a deception that will land Joseph in prison … again. For a guy whom we are told repeatedly God favors, he has a pretty hard life. His clothes testify falsely against him; they are seemingly definitive evidence, interpreted to deceive.

The number of biblical figures who are falsely imprisoned is remarkable (apart from Joseph: Jeremiah, Daniel, Peter, Paul, and Silas come immediately to mind). In the U.S. we have an incarceration crisis, with the highest percentage of our citizenry in prison of any country in the world. The U.S. represents five percent of the world’s population, but houses twenty-five percent of the world’s prisoners. A shocking number of these persons are incarcerated because of false evidence, coerced confession, procedural malfeasance or other legal incompetence, or all of the above.

Joseph’s story is as close to us as both the most popular recent television show, and as our most momentous national moments. Though appearances may suggest otherwise, God is at work in the lives of those who act courageously, with integrity, in the face of seemingly hopeless situations.

God of presence, you remained fully with Joseph when he sat long years in a prison for a crime he did not commit. Help us to see that you are always with us, so that we might live faithfully in your world. We pray these things in the name of Jesus Christ, our Savior and Lord. Amen.

God himself is present openhymnal.org
Arise your light has come ELW, 314
Goodness is stronger than evil ELW 721

In reading the story of Joseph in Potiphar’s house, in which Potiphar’s wife tries to force Joseph, a high-ranking servant in the household, into a sexual relationship, we may feel that we are reading the script for the next episode of “House of Cards.”1
Print All Text Print All Commentary