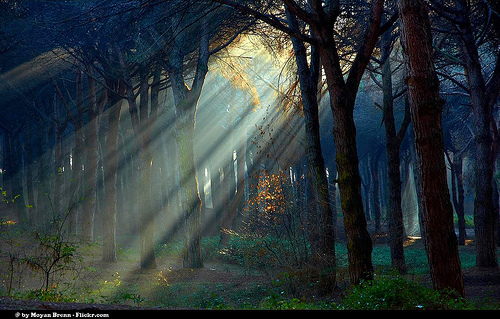 Editor’s Note: Each week in August WorkingPreacher.org will publish commentaries that correspond with the readings for Season of Creation 2014: Series A (The Spirit Series). A full listing of worship resources (including liturgies to accompany the readings) can be found online at http://seasonofcreation.com/worship-resources/readings/.

Our family’s tiny square of urban land supports twelve trees of eight species, some of them a century old and dozens of feet tall, cooling us in summers and sheltering countless birds. These trees are the largest living figures we see every day.

It is easy to take trees’ presence and gifts for granted. Last September I spied an old but still fruitful apple tree in front of an abandoned house three blocks away. I took a fruit home, sampled it, and returned with baskets and a pole picker. The neighbors thanked me for cleaning up the “litter.” No one else wanted bushels of free apples.

We might think of trees as sleeping placidly, but in fact their roots busily extract water and minerals from the ground; their trunks and stems transport these nutrients against gravity upward. Their branches produce countless solar factories, leaves transforming sunlight and carbon dioxide into water vapor, oxygen, and sugars that store energy for growth and fruiting. Their industry supports all animal life, including our own, producing elements we require for breath, nourishment, and hydration.

The annual Season of Creation lectionary, designed for the four Sundays leading up to the Feast Day of Saint Francis in early October, directs attention to the natural world around us and in Scripture. We traditionally read the Bible as concerned with God and humans. But the Bible itself attends to the rest of the living world.

According to The Season of Creation: A Preaching Commentary, edited by Norman Habel et al., this year’s cycle (Year A), “The Spirit Series,” draws attention to “those texts where the Spirit is breathing life into creation, suffering with creation, and renewing all creation.” That book provides orientation to the season and in-depth commentary on the texts. Season of Creation commentaries here at Working Preacher will offer briefer introductions and guidance for pastors seeking to try this lectionary.

While only the Genesis passage offers extended reflection on trees, all four comment on origins in creation and birth. John 3:16 may at first glance suggest to our modern minds a world-denying, world-escaping spirituality out of step with ecological sensibilities. But when this passage is read with the others, it communicates that “God so loved the world (kosmos),” a term that in many cases — including this one — need not be limited to the social world of humans, but encompasses all God’s creation. It signals not concern for the afterlife, but for this life, this world.

Scholars call Genesis 2:4b-22 the second creation account, or the Yahwist’s account (since it names God Yhwh, rather than Elohim). It is likely older than Genesis 1. Christians tend to exaggerate the role assigned to humans in Genesis 1:26-28, “have dominion.” These verses do not commend exploitation for greedy gain, nor do they suggest, if we read the other 90 percent of Genesis 1, that God lacks interest in the many other species. “Dominion” is a smaller idea than we may think.

It is also not the only biblical view of humans. This is crucial to emphasize, since it has been completely overlooked. We find a quite different view in Genesis 2. Verses 7 and 8 describe God’s forming the first human out of the earth’s humus, and placing this human in a garden.

After verses that lovingly describe the garden’s trees, “pleasant to the sight and good for food,” and the rivers that water the garden and extend into rich and distant lands, verse 15 says: “Yhwh God took the human and put him in the garden le’avedah uleshamerah. “To till and keep it” (NRSV) is not completely accurate. “Keep it” is correct, but avad means “to serve, work for.” So God placed the human there “to serve and preserve it.” According to this story, the human is not there to rule, but to “serve and preserve” the ground from which all life springs.

The first human habitat is the tree-filled garden of Eden from which humans may freely eat, with only one limitation, the famous “tree of the knowledge of good and evil.” In the garden, as in every place, there are limits to what is good and healthy. We can imagine that as long as they attended to those limits, the first couple relished the garden and the company of other creatures there.

Psalm 139:13-16 celebrates an extremely personal corner of creation — our own wondrous bodies. Verse 13 describes God’s knitting or weaving the incipient human inside her mother’s womb (Job 10:11 and Proverbs 8:23 employ the same language). This is yet a third image of origins, besides those in Genesis 1 and 2. A parallel line in verse 15 employs another textile term, one appearing frequently in Exodus to describe skilled needlework for making the holy tabernacle. Here the psalmist celebrates having been “intricately woven in the depths of the earth.”

Acts 17:22-28 relates Paul’s speech in Athens. Paul describes the Creator of heaven, earth, and all nations, who “is not far from each of us … in whom we live and move and have our being … for we too are his offspring” (verses 27-28). This Creator “gives to all mortals life and breath and all things” (verse 25). In this God differs, Paul says, from idols living in human shrines. Even though the God Paul describes is invisible, unlike the idols, God is intimate, as in Psalm 139.

John 3:1-16, in this context, points out a second birth, a birth of “water and spirit,” not contrasting with a human’s first birth, which is itself a profound mystery. Rather, being born “of the spirit” is both dependent on earthly life and analogous to it. Yet Nicodemus finds himself confounded by Jesus’ words. Learning what being born of the spirit means is a lifelong adventure. Jesus points repeatedly to water, wind, and world: these elements and their properties help us see more clearly what abundant life means