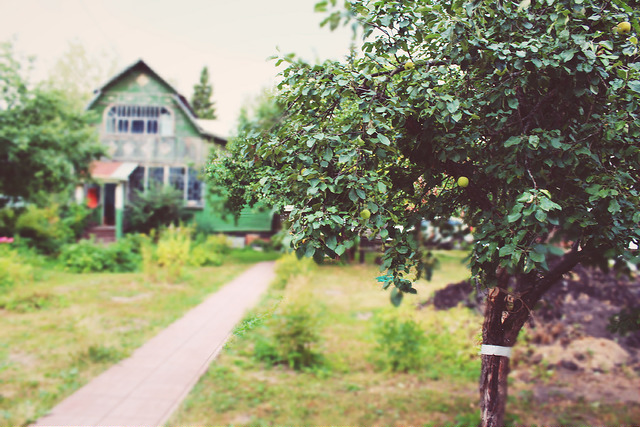 Everyone knows, practically every day, the cost of a gallon of gasoline at the local pump. What we may not recognize so constantly are its hidden costs, the environmental costs of its extraction from the ground, its transport, its refinement, and its burning into the atmosphere, emitting tons of both toxic fumes and greenhouse gases. These costs are not included on the gas station marquee. They remain off the human books, but they still stand in nature’s accounting.

But what is the value of a tree? I lived in downtown Jeffersonville, Indiana for several years before I realized that there was a large Granny Smith apple tree four blocks from my house. This tree stands messy and ill-tended in the front yard of a rundown house with broken window shades. Walking past it one September, I saw hundreds of apples covering the ground, and hundreds more crowding the branches. I took one home to taste. It was delicious. So I brought a basket to pick up more. I knocked on the door and no one answered. Someone walked by and said, “They don’t care about that tree. Take what you want.”

So I returned with a makeshift apple picker fashioned from a broomstick and a milk carton. Knocked again, no answer. Filled two baskets. Went out and bought a real apple picker. Knocked once again. Started filling baskets, and saw a woman watching from across the street. “I don’t think anyone lives there,” she said. “Thanks for cleaning up the mess.”

I was astounded that a tree filled with good looking, sweet and tasty organic fruit could stand on a busy urban street with neighbors all around, and no one seemed to value it. I made a lot of applesauce that year.

The next September I put a note in the house’s mailbox, and the owner wrote back, “Take as much as you can.” We collected three bushels.

That tree is a powerful example of what environmentalists call ecosystem services, the untold benefits humans receive, which we could never repay, from the natural world — beginning with the three trillion trees that clean and process our air, break up the soil, shelter beneficial species, cool forests and cities, and give building material, firewood, beauty, and food.

We could add to the trees the world’s oceans that moderate the temperature and provide food, rain, borders, and majesty. We should also note the tiny creatures, the ones biologist E. O. Wilson calls the little things that run the world, most of whom aren’t even named yet. Without us, they would simply go on as usual, but without them, humans wouldn’t last a year, Wilson says. The billions of nematodes in the ground, the microbes in our guts, the “ants, as well as bacteria, fungi, termites, [that] process most of the dead vegetation and … keep the great tropical forests alive.”1

The value of all these is rarely calculated. But they are what make the earth’s inhabitants very rich. One team of researchers estimates the annual economic value to humans of the ecosystem services of the world’s biomes at twice the human gross domestic product (GDP). Yet we don’t even have these services listed on our spreadsheets. So we are just beginning to calculate the lost value when parts of the earth are degraded. The human economy, with all its signage and stock indexes, is unfathomably embedded in and indebted to nature, and humans hardly see it. It’s like the air we breathe — in fact, it is the air that we breathe — and we’ve barely begun to notice it.

The readings from Exodus in September and October are especially filled with reminders of the God-given gifts of life: safety, water, food, and divine faithfulness. The Psalms overflow with imagery from the natural world: eagles, vineyards, pastures, fields, and trees. Readings from Matthew teach common sense humility in generosity toward neighbors and resistance to wealth’s temptations. Any of these tracks can offer a full season of meditation on a creation that enriches us far beyond our power to imagine.