Texts in Conversation: Preaching and Meaning 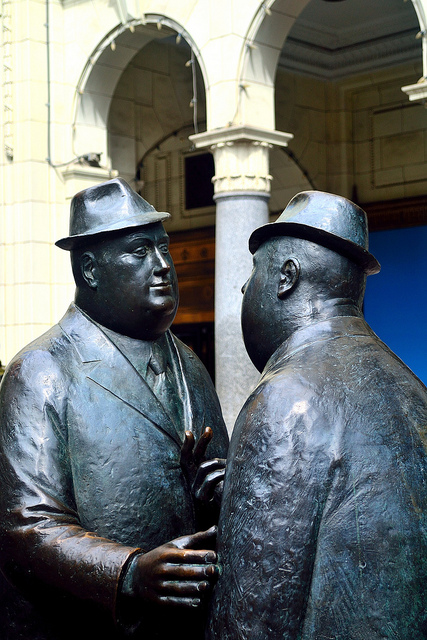 I used to find it incredibly frustrating.

The Sunday texts would be before me. I would diligently study them — analyze their historical context, tease out the challenges and possibilities within and between the texts, meticulously execute word studies, and while listening to the context of the community I served, seek to discern the preachable meaning from inside the texts.

Sunday morning would arrive. The community would gather. The liturgy would flow. The sermon would find its voice. The meal would be celebrated, and as we would go out in Jesus’ name, invariably one or two or five or ten faithful worshipers would greet me in their departing moments by restating for me the meaning of the sermon for their lives. Invariably no two meanings would be alike, and frequently the meanings articulated by those who had worshiped together would seem to be in conflict with one another.

Had we all participated in the same worship experience? Were they not paying attention? Did my words and method communicate so poorly that the meaning which I had so prayerfully sought was lost to my hearers?

I would return to either my study or to my home frustrated, disappointed, sometimes even exasperated that my people were so clearly “not listening.” I would resolve to “do better next week,” to determine ways to more clearly frame the meaning of the text or texts so that there could be “no mistake.” Then next week would arrive, and the scenario would be repeated: same pattern of study, same diligent sermon preparation, same hopes that the meaning would be clear, and the same assorted interpretations and applications from the people in the pew.

These first-century people fully brought themselves — their hopes, their dreams, their challenges, their sorrows, their fears, their needs, their wants, their certainties, their questions, their brokenness, and their own particular manifestations of sin to their encounters with Jesus. The specific texts or stories of their lives intersected with the text or story of Jesus’ life and ministry, and out of this intersection, meaning emerged, meaning that was as diverse and evolving as the people themselves.

Enter preaching. This is what preaching can do: it can place the Jesus-text in conversation with the life-texts of people who have gathered to worship. Preaching can create the space for conversation between living people — in all of their individual uniqueness — and the Living Word. Depending upon the stories that individuals and communities bring to the Jesus story, meaning that emerges for individual lives may not only look different but actually be different.

Such preaching still requires faithful, diligent preparation. It requires a careful study of the texts, their Biblical context, their historical realities, the authors who penned their words, and thorough attention to the choice of words which comprise the texts. The goal of such study, however, is not to discern a timeless meaning from the text or texts that can be dispensed or scattered like seed from the pulpit into ears of waiting hearers.

Instead, the goal of such study is to discern how, from the texts, to place Jesus into conversation with real people’s lives. What is the character of the Jesus they will meet, and how will they encounter him?

The goal of such study is to discern how to invite real people to fully bring themselves — their hopes, their dreams, their challenges, their sorrows, their fears, their needs, their wants, their certainties, their questions, their brokenness, and their own particular manifestations of sin — into conversation with a living Jesus. How will this invitation be given, and what posture will be used to convey the fullness of welcome at Jesus’ table of conversation?

The goal of such study is to allow the texts to speak in such a way that preaching actually becomes a face-to-face, touch-to-touch, Word-to-word, person-to-person interaction with Jesus from which meaning — mixed, diverse, and varied — will emerge. What will be the spirit of your language, and how will your words create an experience of the living Christ?

Play with these questions, and through your preaching, texts will converse, meaning will emerge, and the Word will come to life.