Rethinking the ‘Lenten Journey’: The Train Has Left the Station (Part 1 of 2) 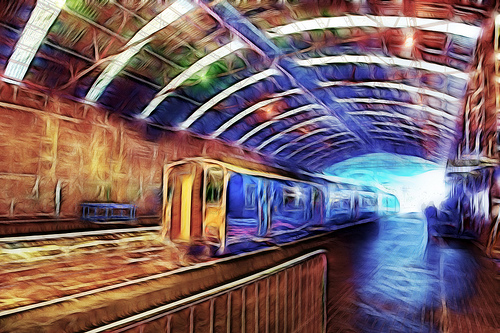 In the first of two essays, Rolf Jacobson takes liturgical lemons and attempts to make theological lemonade. Jacobson takes a personal quirk — the fact that the oft-repeated metaphor “Lent is a journey” irritates him — and uses the opportunity to reflect on how Christian leaders can help congregations experience Lent as a richer, more meaningful season.

I often implore my students to place their thesis statements prominently near the start of their essay. So here goes (flags waving, bells ringing, confetti falling down, rockets shooting up):

Thesis: It is time to reconsider the metaphor that Lent is a journey. We can find better, more meaningful ways to talk about Lent.

Let’s get at the negative part of the thesis first — why the metaphor of Lent as a journey is no longer serving us well. There are several reasons for this conclusion.

First, on the literal level, Lent simply isn’t a journey for most Christians. We are not going anywhere — either figuratively or metaphorically. We might go somewhere for Holy Week or for the Easter weekend — such as over the river and through the woods to grandmother’s place. But most of us don’t literally journey anywhere for the entirety of Lent.

Second, the metaphor of “Lent as journey” reverses the theological agency of the way the journey language is used in Scripture. In the Bible, Jesus is the one who journeys during Lent. This is especially the case in Luke, where the narrative’s plot is cast as Jesus’ journey to his death. The Gospel of Luke starts and ends in the Temple in Jerusalem, with Gabriel’s appearance to Zechariah and the disciples praising God there, respectively. In between, the plot unfolds as Jesus’ journey to Jerusalem. In 9:51, we read, “When the days drew near for him to be taken up, he set his face to go to Jerusalem.”

But that isn’t how the language usually is used these days. Mostly, preachers and worship leaders use the language to talk about “our Lenten journey.” When we use the metaphor of our own journey for Lent, it implies that we are the ones journeying spiritually, going somewhere spiritually. And that language reverses the direction of the theological agency. We believe that sin has created a vast gulf between God and us. And we believe that we cannot by our own reason and strength, understanding and effort, cross that gulf and come to Jesus Christ. The good news is that by God’s grace, Christ has freely done for us what we could not do for ourselves.

Through the Son of God’s shocking self-sacrifice on Good Friday and the Father’s surprising resurrection of the Son on Easter, God crossed the great abyss of sin and death that once separated us from God. Precisely because we could not make that journey ourselves, the Triune God did it for use. For this reason, the language of “our Lenten journey” is theologically inappropriate — unless the point of the language becomes that our spiritual journeys always end at the cross, where humanity did its best to do away with a gracious God. And that every post-Calvary journey begins on the road to Emmaus, with the resurrected Christ appearing to disciples who had given up and were going home.

Third, the language of the “Lenten journey” should be reconsidered because it is simply tired. One liturgical expert I interviewed for this essay defended the metaphor of the journey, but responded that “it is a little old … a little overused.” Responding with a little more vigor, another person I interviewed for this essay responded, “The metaphor of the journey has become stale with overuse in the church.” She said she includes the “Lenten Journey” on “a list entitled ‘Words the Church Has Wrecked’ on my computer … words that colleagues and other church people overuse, sometimes rendering beautiful words meaningless.”

Like a year-old set of tires on my wheelchair, which have no tread left and have patches where you can see through to the kevlar underlayer, the language of journey is just plain worn out, threadbare, done.

Metaphors that grow tired lose much of their ability to communicate or inspire. The Old Testament scholar William Brown has pointed out that metaphors can become dead. He writes that when “a given metaphor [becomes] automatic and effortless, even unconscious” they are dead.1 I believe that the metaphor of Lent as journey has become dead.

Fourth, and perhaps worst of all, the focus on Lent as journey reinforces the unhelpful idea that Lent is primarily about what we do and don’t do in worship. In Lent we don’t say “Alleluia” (the “A-Word”) in worship, and some congregations add an extra service on Wednesday. These practices reinforce that truly mistaken message that the mark of an “active Christian faith” is going to worship.

That message is hogwash.

But we unwittingly reinforce that misbegotten message through some of our current Lenten practices. As one lay person whom I interviewed for this essay said, “I believe that Lent has become more of an ‘obligation to go to church more than once a week’ instead of what it is truly meant to be. I have had pastors who have made the season of Lent a learning experience outside of the traditional story and others that have made me want to have a root canal on Wednesday evenings instead of going to church!” She added, “We need to have a different way to describe the many seasons of the church year. This is more of a rant about the actions of going to church rather than the actual season, but in my mind the two go hand in hand.”

I believe that we need to re-imagine Lent and re-language Lent with metaphors and images that will equip the laity to experience Lent as forty days of spiritual deepening rather than six Sunday of not singing alleluia.

So what other ways of thinking about Lent are there?

Part two of this series will explore constructive ways to talk and think about Lent in congregational settings.