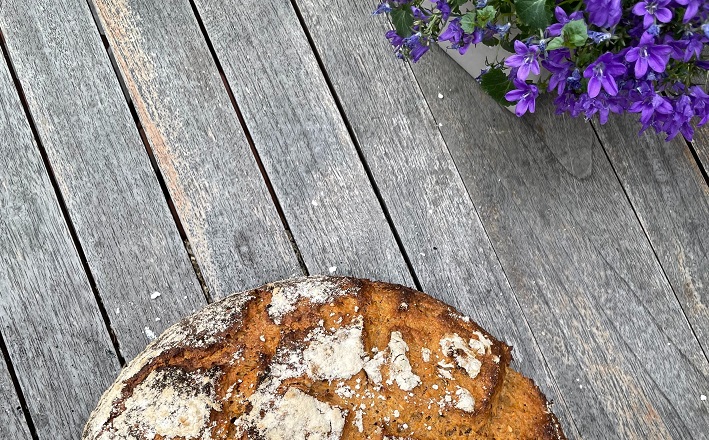 Photo by Niklas Kosel on Unsplash; licensed under CC0.

The 2020 film Kiss the Ground, narrated by Woody Harrelson, portrays “regenerative farming,” a relatively new practice in the U.S. and around the world, restoring spent land and sequestering carbon in the soil.

In one scene, a North Dakota rancher who, broke and desperate, turned several years before from government subsidies for “conventional” farming to regenerative practices, points out the stark differences between his own now lush, green, and profitable land and that of the adjacent acreage, which has been turned into a dustbowl through chemicals and industrial machinery. The film, available on Netflix, offers hope for both feeding humans and solving the climate crisis.

Though we ourselves are relatively inexperienced in our own microscale farming in Indiana, we have personally witnessed some of the biological realities that this film and many soil scientists teach. Infertile clay mud is being enriched by fertile humus, more supportive of the vegetables and trees we are planting. Earthworms are turning up in every shovelful of soil. We feed ourselves well every month of the year. We even enjoy bounties nature offers without our effort—wild blackberries and persimmons; redbuds, dogwoods, and wildflowers blooming where we stopped mowing; bluebirds perched on tomato stakes, stalking insect pests; spring rains germinating forgotten fall seeds. In words from Psalm 85 (July 11): “Faithfulness will spring up from the ground, and righteousness will look down from the sky. The Lord will give what is good, and our land will yield its increase.” Or from Psalm 145 (July 25): “You open your hand, satisfying the desire of every living thing.”

Two complementary themes characterize the Scripture readings for July and August this year: abundance and resistance. Anchored by the Gospel of John’s version of the miraculous multiplication of loaves and fishes, which inaugurates Jesus’ “I am the bread of life” speech, several passages describe God as creation’s generous nourisher: the giver of manna in the wilderness, the shepherd guiding a flock to pasture; the feeder of sparrows, prophets, and nations; the inspirer of similar generosity among creation’s members. Psalm 123 (July 4) offers a hinge between this theme of merciful abundance and the other theme, that of resistance, when worshipers say, “Have mercy upon us, for we have had more than enough of contempt.” Other readings go on to critique social inequalities and violence erupting from the powerful—rulers both foreign and homegrown who, for greed and power, abuse their offices and destroy their neighbors. This behavior is aberrant in the economy and ecology of God’s creation. It defies God’s reign and cannot stand, and prophets looking to divinely given freedom resist it.

The struggle throughout Scripture, and throughout human history, is the need for exodus from Egypt: recognizing, resisting, and escaping slavery to human powers in order to seek God’s reign, the principles built into creation that freely provide and freely nurture.