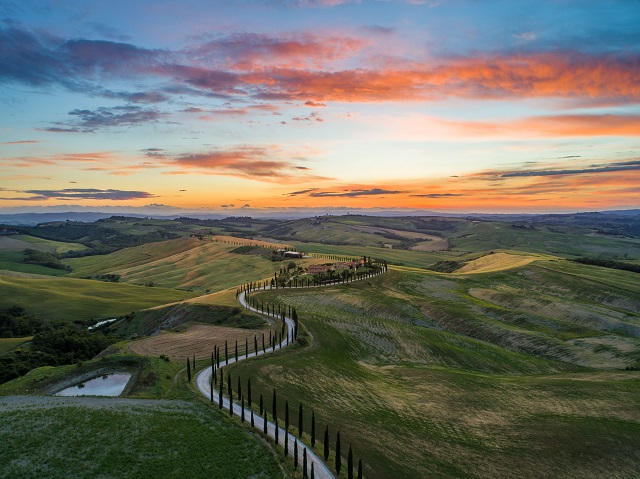 "Amazing sunset in Tuscany." Photo by Luca Micheli on Unsplash; licensed under CC0.

Let’s begin with an confession: This is a challenging text.

It is made more so by the fact that the phrase, “thief in the night,” is associated with a flavor of eschatology that is fraught with immense problems and pitfalls.

But Matthew 24’s popular associations are no reason to run from it. To the contrary, given the text’s place in popular culture, it is all the more urgent that thoughtful and courageous preachers preach this text clearly and boldly. If you won’t, then who will? The answer to that question might be more terrifying than the text itself.

Church history is littered with the corpses of defunct eschatological predictions, in large part because interpreters have failed to heed Jesus’ warning in verse 36: “But about that day and hour no one knows, neither the angels of heaven, nor the Son, but only the Father.” The author Matthew 24—somewhat ironically—illustrates the point himself, when he incorrectly predicts that “this generation will not pass away until all these things have taken place” (verse 34, emphasis mine). Another one bites the dust.

The point is that Matthew 24 is not calling Jesus’ followers to engage in prediction. They are called to preparation. The former nourishes certitude whereas the latter nourishes vigilance and attentiveness. When Jesus enjoins his readers, he tells them to “keep awake,” “understand this,” and “be ready” (verses 42-44). In doing so, Jesus calls his audience to shape its life as if it were living in “the golden hour.” The golden hour is a term familiar to photographers. It refers to that brief window of time just before the sun fully exposes itself to the earth. It’s a transitional period between the darkness of night and the light of day. He calls his disciples to live as if day were just about to break.

While Matthew 24 is primarily concerned with the future and imminent coming of Christ, there are important parallels to Jesus’ ministry elsewhere. This is an important point, because it demonstrates that Jesus’ second coming is not an anomaly, but rather the hopeful summation of his heretofore incomplete ministry.

For Matthew 24, the arrival of the kingdom disrupts banal, daily activities such as “grinding meal together” (verse 41). Life carries on as usual, at least until Jesus arrives. Thinking back on earlier chapters, Mary’s mysterious and holy pregnancy comes to mind. This remarkable event interrupted the normal procedures of engagement and family making (Matthew 1:18-25). John the Baptist’s own apocalyptic ministry is interrupted and reshaped by Jesus’ arrival (Matthew 3:13-17). And when Jesus calls his first disciples, he disrupts them as they cast nets into the sea (Matthew 4:18-22). When Jesus’ shows up, it often interrupts us, like a “thief in the night.”

Jesus’ arrival is also relationally disruptive and even divisive. In the case of Matthew 24, this is literally true: “Two women will be grinding meal; one will be taken and one will be left.” Matthew 24 unabashedly attributes this shocking story to the scandal of God’s election: “And he will send out his angels with a loud trumpet call, and they will gather his elect from the four winds, from one end of heaven to the other” (verse 31). For the Gospel of Matthew, the Son of Man’s apocalyptic arrival exposes things for what they are, including the elect status of his “sheep” (see also Matthew 25:31-46).

According to Matthew 24, in the days leading up to the flood the normal patterns of human life prevailed—eating, drinking, and procreating. Life was normal, and there we no indications of impending doom. But informed readers of Genesis 6-9 recognize that beneath the thin crust of normalcy raged a torrential epidemic of corruption and violence (Genesis 6:11-13). Yahweh smashes this delusion with a tragic—and, according to Matthew, unforeseen—decision to return creation to its watery origin. From there, Yahweh would start over with Noah, his family, and a small remnant of animals. Jesus’ coming, similarly, will come as a surprise to those who are unprepared for its sudden arrival.

Preaching this text will take courage. Doing so won’t be easy, because your work as interpreter will probably continue on even after the sermon has been delivered over the weekend—in the form of emails, inquiries, and possibly even complaints.

There are beautiful rewards for the preacher willing to grapple with Jesus’ apocalyptic words. In them you will sense the urgency of Christ, imploring his followers to live every day in the light of his imminent coming.