God Said Yes to Me 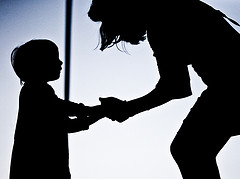 The Skies of BlueCreative Commons Image by Thomas Hawk on Flickr.

Something different, Working Preachers. I want to begin the column this week with a reading that I think captures some of the spirit we see and hear in the Syrophonecian woman’s response to Jesus.

I asked God if it was okay to be melodramatic
and she said yes
I asked her if it was okay to be short
and she said it sure is
I asked her if I could wear nail polish
or not wear nail polish
and she said honey
she calls me that sometimes
she said you can do just exactly
what you want to
Thanks God I said
And is it even okay if I don’t paragraph
my letters
Sweetcakes, God said
who knows where she picked that up
what I’m telling you is
Yes Yes Yes
(Kaylin Haught, “God Says Yes to Me,” from The Palm of Your Hand, 1995)

The woman tells the truth. And when the truth gets told? Worlds change. Her world changed. Same for Jesus. He tried to escape it, tried to escape notice (Mark 7:24). No wonder. The rest of his ministry cannot be the same because of her. We think we want our world to change, but do we really? Because when your world is about to change, that takes some preparation, getting your head around, getting used to. Life, obviously, will never be the same again. You won’t be able to go back to the way it was before. So we choose to remain where we are because we convince ourselves that it takes a lot less effort to live lives of falsehood than to muster the energy to move from lies to honesty. Telling the truth takes risk. It takes courage, so much courage. So, we don’t speak the truth. We stay silent. Bite our lips. Wait for the right moment, which, by the way, never, ever comes. We remain in our illusions, in the made-up worlds we’ve created that are carefully and strategically segmented from the truth we desperately want to live. This is true in our personal lives and it is true in our pastoral lives. You do not need me to tell you just how true this this. Just stop and think about this for a minute. Please. The lies you live. The truths you are afraid to tell. Tell yourself the truth. Because that’s the first step in uttering the truth to others. And an authentic preacher, a preacher who is believable, the kind of preaching we need these days, needs to speak about the difficulty of truth-telling and the difficult truths.

If Jesus needs to be told the truth of the Gospel, God knows (literally) we do as well. All too often truth is side-lined so as to make the church, or the call to proclaim the Gospel, look better than it is. Truth-telling is absolutely essential, in part because the church itself cannot live into the fullness of the Gospel when exclusionary power structures continue to exist, says the woman from Tyre. When the truth is suppressed, when your truth is suppressed, it is then and there that assumptions take over. It is critical to name the truth, to put it out on the table for all to deal with rather than to maintain our current practices of ignorance or pretension. Because when you are accustomed to hiding the truth, overlooking it, it then becomes almost impossible to discern truth from falsehood.

Truth-telling is hard to do and hard to hear — and will be resisted, sometimes only at first, sometimes perpetually and even exponentially. But that is when the truth has to be heard for the sake of empowering the other. I think this is one of the most powerful promises of this text. She tells the truth so that others can then say, so that I can say, “You have just told my story! Thank you!” The truth, in part, has to be told and has to be heard so that you know and others know that you are not alone.

The process of truth-telling is essential in ministry, regardless of any issue we use to divert the promises of God. Those persons called to and entrusted with the privilege of giving voice to God’s love must be held accountable to that which the Gospel in its fullness proclaims. When voices are sidelined, when particular presences are questioned, when presentations of the Gospel are called into question because the source is an outsider, like from Tyre, it is never, ever just about us, but also about God. When our imagination for God’s hope for the church is undermined by our lack of imagination, that is when God becomes less than God. The Syrophoenician woman tells the truth about God and in doing so helps us imagine that truth for ourselves.

P.S. The courage necessary for truth-telling is some of what I will be presenting at the Celebration of Biblical Preaching at Luther Seminary, October 5-7, 2015. Join me, Barbara Lundblad, Otis Moss III, Luke Powery, and Michael Brown in thinking about the courage to preach! Register online. See you there!