Neo-Narrativity: A Review of ‘Looper’ 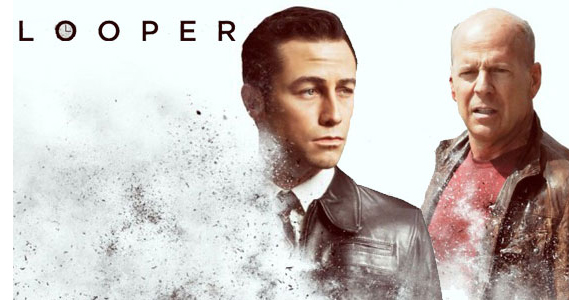 Many contemporary homiletics texts will describe narrative preaching as a twentieth-century phenomenon that rose to prominence in the seventies, dominated the eighties, and diminished in the nineties.

The overwhelming enthusiasm for narrative preaching was twofold: it attends to the “deep structure” at work in the biblical witness, and it resonates with the way most of us experience our being in the world. Narrative preaching draws together the purposeful work of God in creation and redemption with the discrete experiences of God’s people, which resonate with plot-like potency.

The problem with narrative preaching — and a contributing factor to its demise — is that it tends to ignore certain experiences and highlight others in the service of rendering a coherent story. It occludes biblical themes that seem to work against the dominant strand of thought. Moreover, it marginalizes the experiences of those whose lives seem disordered, even purposeless. Narrative preaching is now dead, some have argued, and its demise has freed Christ-followers to experience life unencumbered by narrative constraints.

A slew of movies in the nineties and early 2000s reinforced the seeming randomness, or non-narrativity, of modern life. Pulp Fiction, American Beauty, Magnolia, and Lost in Translation are prominent examples. Such films reinforced a narrative aphasia connected with that wildly slippery term postmodernity. If people no longer experienced their lives as unified, teleological plots, and narrative preaching was dominating the North American pulpit, then perhaps this was a contributing factor to the decline of church attendance and general disenchantment with Christianity.

Recent films are calling this “death-of-narrative” narrative to question, however, by exposing us to new forms of storied expression. An example of such neo-narrativity is Looper . Written and directed by Rian Johnson, Looper is a futuristic action thriller that features an assassin named Joe (Joseph Gordon-Levitt) who is contracted to kill his future self (Bruce Willis). The circumstances of Joes’s life are bleak. Abandoned by his mother and forced to eek out an existence on society’s margins, he turns to a life of crime.

In an undisclosed point in the future, time travel is invented and immediately deemed illegal. The mobs of the future, however, use time travel to send their enemies into the past where a looper, like Joe, will assassinate them. When Joe is faced with the task of murdering his future self, the story unravels into a mind-bending drama where present actions hold asynchronous ramifications. Looper is interesting for preachers because it opens new ways of thinking about narrative preaching.

One of the elder statesmen of narrative preaching is Eugene Lowry. His book, The Homiletical Plot, is a staple text in many seminary preaching courses. Lowry argues that sermons should follow a narrative form that mirrors the plot development of a good story. He observes that a “typical movie plot” moves from a felt discrepancy toward resolution; it moves from an “itch” to a “scratch.” Every good sermon aims at solving some felt discrepancy in life, Lowry argues, and an effective narrative sermon will lead people to experience the resolution afforded by the Gospel along a linear, storied structure.

Strawson concedes that the dominant experience of Western persons is diachronic, and this sense of constancy through time leads most of us to experience the disparate events of life in narrative form. Strawson does not hold to such an experience, and he believes that many others in contemporary society experience their lives episodically. He does not see his selfhood in the present connected in any way to his experiences in the past nor does he see his present situation oriented to any future. Against the “story-telling tendency,” which looks for “developmental coherencies in the manifold of one’s life” (443), an episodic orientation views temporal succession without causality, as an undifferentiated flow of successive events. In other words, one lives fully in the moment without connection to a past or future present.

The anti-narrativity campaign is one of several forces leading to the death of narrative preaching. The loss of a coherent plot structure in contemporary films is another. I’m suggesting that films like Looper offer a new way of thinking about narrative that might inform a new “new homiletic” in twenty-first century pulpits.

Looper unfolds in several directions at once. One narrative thread plays through a scenario in which young Joe successfully murders his future self, living out his existence according to a traditional, plot-like, causality. However, another narrative thread crosses, and at time occludes, the possibility of Joe’s dominant narrative. In this series of events, the elder Joe successfully evades his earlier self and seeks to murder the mob boss of the future responsible for murdering future-Joe’s wife — it makes more sense when you watch the film.

Homiletics can learn something from the way Johnson tells his story. Between the linearity demanded by a temporal-causal temperament (the narrative approach) and the episodic temperament that cannot imagine a causality at work through time (the anti-narrative approach), a third way opens. Looper offers us a vision of a non-linear narrativity infused with episodic consciousness. It exposes and thereby opens diachronic narrativity to episodic inflections. Such a mode of narrativity, I believe, invites a stay of execution on narrative preaching, or better, to find a neo-narrativity emerging from narrativity’s tomb.