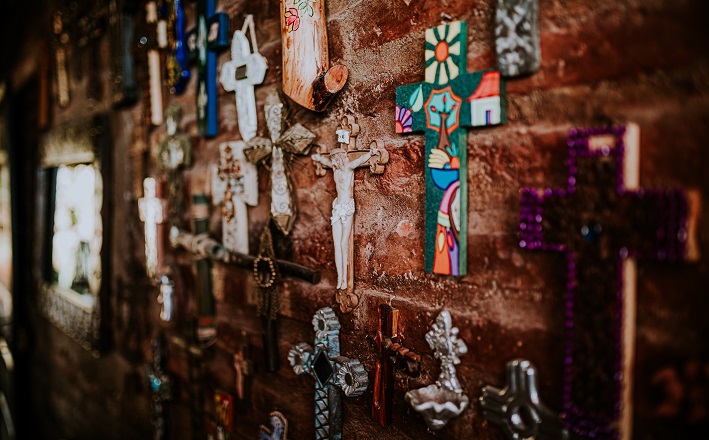 The tenth commandment was “No moral lesson on high holy days.” With this prohibition Stendahl meant to direct preachers to celebrate the feast, to enter into praise, rather than to explain of the mystery or exhort the congregation to good works. On the high holy day of the Easter Vigil, the lectionary assigns for the epistle reading, Romans 6:3-11, an exultant affirmation of the resurrection in the voice of the apostle, Paul. This exclamation, at once liturgical and celebratory, has ethics and right action built right into it through the comparison between Jesus’ death, death to sin, and the death of the old self. The destruction of sin is one dimension of the rich and multi-layered image of resurrection.

Romans 6:3-4
The reading opens with the answer to the rhetorical question posed by the imaginary dialogue partner in Romans 6:1. “Of course!” it is absurd that one should continue to sin that grace may abound all the more! Paul alludes to early Christian tradition that all who are baptized are baptized into Christ’s death. Baptism is associated with death in Mark 10:35-40 when James and John request to sit at Jesus’ right and left hand in glory. Jesus’ answer to them, “Are you able to drink the cup that I drink, or be baptized with the baptism that I am baptized with?” uses drinking the cup and being baptized as ways to speak of his death. In the early decades after Easter Christ believers performed the story of Jesus’ death and resurrection in the rituals of Eucharist and baptism. The corporate body — “all of us,” “we” participate in burial with Christ and like Christ was raised, we are able to “walk in newness of life,” moral and existential new life.

Romans 6:5-7
The language of slavery “enslaved to sin” and freedom “freed from sin” is threaded through this passage and the longer one of which it is a part. Slavery and freedom are parallel to death and life. Resurrection overcomes and overwhelms death and slavery. The need to combat and resist sin hovers over these verses even while Paul proclaims that sin is “destroyed” and “dead.”

Romans 6:8-11
“We believe,” “we know,” expresses the conviction of this Easter community in Christ’s life and our future life with God. Death no longer “has dominion” over him; death no longer “rules” or “is master over” Christ. Extending the comparison, Paul concludes that like Christ, “you” are “alive to God in Christ Jesus.”

Although in the verses that follow this lectionary reading, Paul turn to ethical exhortation, in preaching on Romans 6:3-11 at the Great Vigil of Easter, I would obey Krister Stendahl’s commandment. Paul’s jubilant rhetoric that proclaims that “we might walk in newness of life” and that you are “alive to God” arises out of the experience of resurrection known in the Christian community in cities throughout the empire and in Rome in the first century. At the Easter Vigil in the present Christians are retelling the story of Jesus’ death and resurrection, and through baptism and eucharist they are performing that transformation from death to life. Adults who choose to be baptized, like James and John in Mark 10, are baptized into Jesus’ death. Infants whose parents make promises on their behalf are being incorporated into, are participating in, that story of life from death. They live this story in a culture that both fears and denies death. They live it in a culture where language of “sin” has become antiquated, but where its power is as destructive as ever.

To celebrate the mystery on a high holy day, a preacher might invite the congregation to live more deeply in the imaginative world of the text. Metaphors of being buried, descending, getting covered up, drowning describe visceral human experience and contains the paradox of being exalted, rising, walking in newness of life, begin alive to God. One way to imagine one’s way into a text is to focus on one sense — here I might attend to the physical, kinesthetic dimensions of all these verbs and allow the listeners to “feel” this movement. Being enslaved is a physical state. Being made free is a bodily experience. The experience of resurrection is a corporate one — the people are made new. Paul was calling on and alluding to narratives of creation, combat, deliverance in scripture and from early Jesus traditions. Some of these narratives are contained in the series of Old Testament readings appointed for the Easter Vigil. The liturgical setting of the Easter Vigil calls the preacher to play with these powerful archetypes, to expand and elaborate upon them to move through performance into praise.