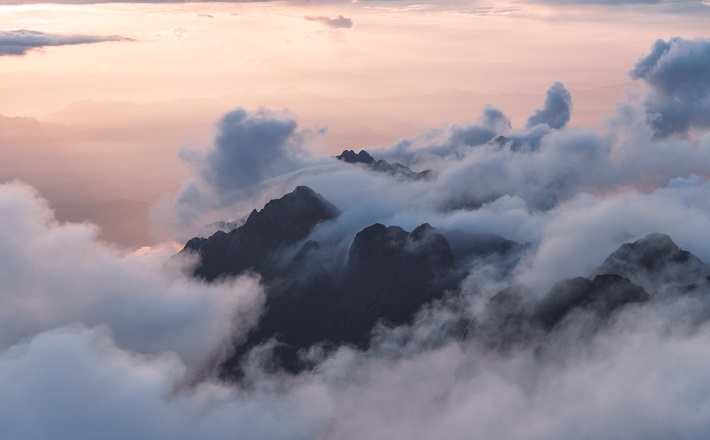 While he was saying this, a cloud came and overshadowed them; and they were terrified as they entered the cloud.Photo by Andreas Kind on Unsplash; licensed under CC0.
March 3, 2019

Plus, the “pillar of cloud” (verse 7) can be construed as at least a catchword-connection to the cloud mentioned twice in Luke 9:34. But something much deeper and more profound comes into view when Psalm 99 is read in conversation with Luke’s account of the Transfiguration.

At first sight, the Transfiguration seems to be all about God’s transcendence and otherness. Incredible things happen. Moses and Elijah suddenly appear, and a cloud engulfs Jesus and the disciples, who are understandably “terrified” (Luke 9:34). The biblical word that best describes such an experience of God’s otherness is the word “holy,” and “holy” is the keyword in Psalm 99. “Holy is he!” is the phrase that marks the conclusions of the first two sections of the psalm; and the word occurs twice more in verse 9, including a final affirmation of God’s holiness that recalls verses 3 and 5.

In Psalm 99:1-3, the traditional sense of holiness is operative. There is trembling and quaking (see Exodus 19:7-25) at the presence of God who is “great and awesome” (verse 3). Even within this section, however, there is a hint of what is to come as Psalm 99 proceeds. As it will turn out, the holy God is not wholly other.

Rather, this transcendent, unapproachable God can be experienced “in Zion” (verse 2), a very specific earthly place. Furthermore, the mention of “the cherubim” (verse 1) is almost certainly a reference to God’s earthly throne that was located in the Temple on Mount Zion (see also verses 5, 9). As Psalm 99 unfolds, it becomes increasingly clear that the holy God is actually invested not only in a particular place, but also in particular people and the human situation.

Verse 4a is problematic and might better be translated, “The might of a king (is to be) a lover of justice.” In any case, verse 4a goes on to affirm emphatically (the two “you”-pronouns in Hebrew provide the emphasis) that God has established “equity” (see Psalm 96:10; 98:9), as well as “justice and righteousness.” According to Psalm 82, the enactment of justice and righteousness is what constitutes true divinity; so it is not surprising that the enthronement collection (Psalms 93, 95-99), of which Psalm 99 is the culmination, twice portrays God as having come into the world precisely to do justice and righteousness (see Psalm 96:13; 98:9, which I translate in part as “[God] has come to establish justice on earth. He establishes justice in the world with righteousness …”).

It is crucial to note that justice, righteousness, and equity are relational terms. If God is capable of being wholly other, God has chosen not to be. God has invested Godself in the world to set things right among the “families of the peoples” (Psalm 96:7), so that “The world is firmly established” (Psalm 96:10; compare Psalm 82:5 where the injustice of the gods destabilizes the created order). Fittingly, the whole creation celebrates God’s arrival (Psalm 96:11-12; 98:7-8). In short, in the enthronement collection, including Psalm 99, holiness is re-defined. It is not simply otherness and separation; rather it is involvement and relationship.

This re-construal of holiness proceeds apace in the final section of Psalm 99. God’s involvement extends to particular persons — Moses, Aaron, and Samuel. Although these three may have “kept his decrees” (verse 7), the people they presided over certainly did not. This implies that Moses’, Aaron’s, and Samuel’s crying out to God consisted of requests for forgiveness (see, for instance, Exodus 32:1-14).

This conclusion is reinforced in verse 8, which, like verse 4, shifts from third-person to direct address. Furthermore, there is another emphatic “you”-pronoun in verse 8: “you answered them.” If the next line is any indication, the divine answer is God’s willingness to forgive, even though there are always consequences for disobedience (a reality communicated by the next line, which describes God as “an avenger of their wrongdoings”).

The re-construal of divine holiness as intimate involvement rather than otherness and separation is even clearer when one realizes that the word NRSV translates “forgiving” actually means “to bear, to carry.” The holy God is so present among the people that God is bearing the burden of the people’s disobedience! At this point, Psalm 99 recalls Hosea 11:8-9, where God’s response to God’s wayward child, Israel, is not punishment, but rather forgiveness.

In Hosea 11:9, the divine voice describes Godself like this: “for I am God and no mortal, the Holy One in your midst.” In short, what makes God divine is the willingness to forgive unfailingly. Holiness has been radically re-construed. No longer does holiness consist of separation from the source of sin, but rather of intimate relationship with the sinner. Divine holiness is grounded in grace.

Perhaps Moses’ face shines in Exodus 34:29-35, the Old Testament lesson for the day, not only because he is carrying the two newly-given “tablets of the covenant” (Exodus 34:29), but also because the tablets have been given by the God who has just introduced Godself as “merciful and gracious, slow to anger, and abounding in steadfast love and faithfulness” (Exodus 34:6). The very existence of the new tablets is a sign of God’s willingness to be in ongoing relationship with a sinful people.

Now, back to the Transfiguration — reading Luke’s account with Psalm 99 in mind invites careful attention to the literary context of Luke 9:26-38. The Transfiguration is immediately preceded by Jesus’ announcement that he must suffer, be killed, and be raised (Luke 9:21-22). While the Transfiguration account itself is dominated by traditional holiness-phenomena, its context communicates that divine holiness is manifest ultimately as intimate relatedness on behalf of the other — that is, holiness is grounded in divine grace and suffering love, as Psalm 99 suggests as well.

Readers of the biblical text know good interpretation begins with the question, “What does the text say?”

This week, more than usual in the lectionary, all the lessons have obvious interconnections.
Print All Text Print All Commentary