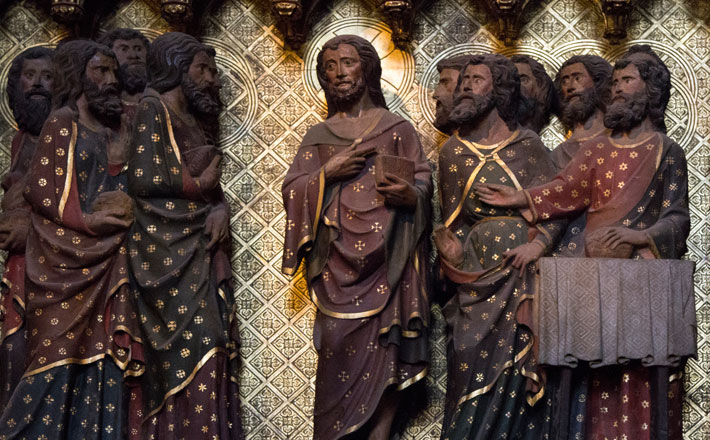 "The Disciples give Fish to the Risen Lord to eat" from the medieval polychromed choir screen of Notre Dame de Paris. Image by Lawrence OP via Flickr; licensed under CC BY-NC-ND 2.0.
April 19, 2015

The disciples are gathered together somewhere in Jerusalem. Suddenly Jesus is in their midst. He greets them saying “Peace be with you! Most likely he greeted them in Hebrew, saying, “Shalom Aleichem!” That “shalom” word comes up at the end of the psalm for this Sunday and furnishes the connection between the psalm and the Gospel text.

If you travel to Israel, you will hear “shalom” all over the place. Walk into a shop in Jerusalem, or walk out, and the clerk will say “shalom.” Visit a synagogue anywhere in Israel, or anywhere in the world, and after the service you can say to the person next to you, “Shabbat Shalom” (Have a good Sabbath!) and that person will return the greeting.

The word is all over our worship services, too, though it you may not notice it because we use the translation, “Peace.” During the service the pastor will say, “The peace (shalom) of the Lord be with you always” and you respond, “and also with you.” Or you hear the benediction at the close of the service, “Go in peace (shalom)” and you respond” “Thanks be to God!”

The greeting is an ancient one, going back to Old Testament times. For example: Gideon was out in the fields working and met a stranger. The stranger touched a bowl of stew with his staff and it burst into flame! Gideon was scared to death. Then the stranger said, “Don’t be afraid! Peace be with you! (shalom aleichem)” (Judges 6:23)

Another example: An old man sees a stranger walking around in the town square. He says, “Where are you from? And where are you going?” The stranger says, “I’m from Bethlehem and am heading home. But I don’t have a place to stay tonight.” The old man says, “Peace be with you! (Shalom Aleichem). Come and stay at my place!” (Judges 19:16-21).

Finally, when Paul writes a letter he begins “Grace to you and peace (shalom)”; note Romans, I and II Corinthians, Galatians, etc.

The psalm for today ends with the word shalom in Hebrew, again translated “peace” (v. 8). The psalm is a prayer for help. “Answer me … be gracious to me … hear my prayer” says the psalmist (v. 1). Apparently some in the community were spreading lies about him, ruining his reputation. He can’t take it much longer and asks the people, “How long are you going to keep this up!” (v. 2) He tells them that the Lord will hear his cries for help. He invites them to join him in a worship service and then leaves things in the hands of the Lord (vv. 3-5).

In verse 6, the psalmist brings the prayers of the congregation to the Lord’s attention by quoting them: “Let the light of your face shine on us, O LORD” means “show favor to us!” (see also Numbers 6:25).

With verses 7-8 the mood changes. Something has happened to the one who was praying so desperately. Did the psalmist himself take the advice he recommended in vv. 4 and 5? Maybe he has withdrawn from the difficult situation, pondered the problem in silence, gone to worship, and decided to leave things in God’s hands. Once again there was joy in his heart. And he can lie down and sleep in peace (shalom).

On Not Trying to Babysit the World

Psalm 4 is often labeled an “evening psalm” because the whole psalm drives toward what is said in the last verse: “I will both lie down and sleep in peace (Hebrew, shalom); for you alone, O LORD, make me lie down in safety.” That shalom word is what links the psalm to Jesus’s greeting in the Gospel, “Peace (shalom) be with you.” But what does this psalm mean for us? For the evening, at the end of the day, when one is about to drift off to sleep?

One of my teachers, Gerhard Frost, once made a comment that has stuck with me. He remarked, “It was one of those nights when I was lying awake, babysitting the world.” Babysitting the world indeed. Maybe you’ve had such nights. You are worried about the kids, the grandkids, the bills, your health, not to mention Afghanistan, Iraq, Syria, and climate change! So you can’t get to sleep. But this psalm says “Shalom be with you. Relax. Let God run the world for a while. Have a good sleep!”

This same teacher told a story which I’ve remembered. Once a grandmother accepted her grandson’s invitation to take her first airplane ride in his small plane. She screwed up her courage and climbed in. She marveled at seeing her family farm and her hometown from the air. The grandson became concerned, however, when he noticed that her knuckles were white, as she hung on to the arms of the seat. So they landed. A crowd of relatives met them to ask, “How did you like it, Gramma?” “Oh it was fine,” she said, “but I’ll tell you a secret. I never let all my weight down!” This psalm invites you to lie down each night and let your weight down, trusting in the LORD (v.5) to take you through the night and into another day.

The same imagery occurs in Psalm 131. In The Message translation:

God, I’m not trying to rule the roost

I don’t want to be king of the mountain.

I haven’t meddled where I have no business

I’ve kept my feet on the ground

Have you ever read the book All I Really Need to Know I Learned in Kindergarten by Robert Fulghum?

In the overture (John 1:1-51) of the symphonic Fourth Gospel, a clear chord is struck that emphasizes the welcoming and adoption of those who embrace Jesus Christ, Son of God: “But to all who received him, who believed in his name, he gave power to become children of God who were born, not of blood or of the will of the flesh or of the will of man, but of God” (John 1:12-13).
Print All Text Print All Commentary