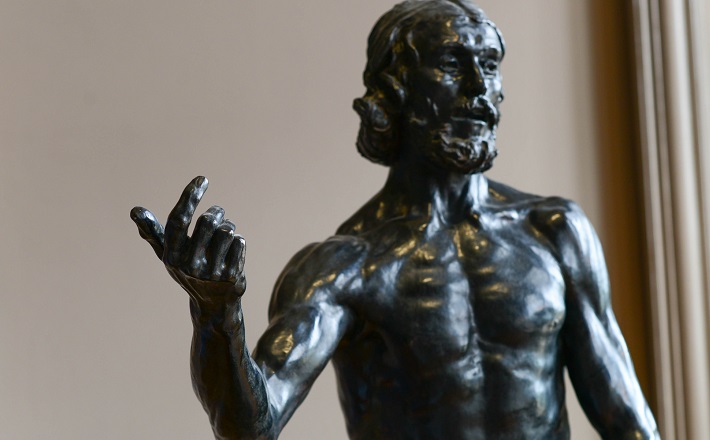 He proclaimed a baptism of repentance leading to forgiveness of sins. In today’s reading, John spells out what repentance looks like: when peoples’ hearts and minds are changed, their actions change too. Words are empty if they don’t result in deeds. Fruitless trees will be chopped down and thrown into the fire.

John’s rhetoric is neither polite nor gentle. In Luke (as opposed to Matthew) he doesn’t specifically target the religious leaders. Instead, he calls the whole crowd that has come out to see him “you brood of vipers” and warns them: “Do not begin to say to yourselves, ‘We have Abraham as our ancestor.’” His message is clear. Don’t assume that because you have a religious heritage, you belong to God’s people. God can create a new people from stones. We let ourselves off the hook too easily if we make this merely a historical remark, a saying that sets the stage for the inclusion of the Gentiles among God’s people. Although it certainly does fit with Luke’s interest in redefining the people of God, John’s message needs to be heard by baptized Christians as well. It’s as shocking as if a preacher in a liturgical church today were to say, “Don’t presume to say, ‘We’re baptized!’ Show your faith by your actions, or get ready for the ax.”

It’s notable that John addresses this threat not to individuals, but to the group as a whole. The ax imagery prefigures Jesus’ parable in Luke 13:6–9 about the unproductive fig tree that is given a good dose of fertilizer and another year to live. But if it doesn’t bear fruit after one more year, then what? The ax. With these stark images both John and Jesus warn God’s people against complacency. If the community that identifies itself as God’s own people does not bear the fruit that God desires, God is always capable of beginning again with people who are willing to listen and obey.

John’s challenge to fruitful living prompts a series of questions from his repentant hearers. “What then shall we do?” The first question comes from the crowd in general, and John replies to the whole group. Do you own two shirts? You have more than you need. Do you have food? Give some away. He leaves no wiggle room for those who might be tempted to say, “But I’m not rich.” The command is absolute: some people in your community don’t have enough to survive, so if you have anything at all, share it.

The next two queries, from the tax collectors and from the soldiers, move beyond sharing to address behaviors that cause poverty. John tells the tax collectors and soldiers to stop abusing people in order to make more money. Don’t take more than the minimum, don’t shake people down, and don’t blackmail them. Be content with your wages.

John’s words show that he views poverty neither as an accident nor as the fault of the poor. In his time, as in ours, the earth produced more than enough goods to feed and clothe everyone. The problem then and now is that the resources have been grabbed up by a very small percentage of the population. John called not only the wealthiest but also the merely comfortable to treat their accumulation of goods as directly related to the seriousness of their repentance. How we get money and how we use money exposes what we value. Economic issues are spiritual issues. If we ignore God’s commands to practice social and economic justice, how can we claim that we love God with all our heart, soul, mind, and strength? If we prioritize our pleasures above our neighbors’ basic necessities, how can we claim to love our neighbors as we love ourselves?

Though John’s message seems radical to his hearers, he is quick to remind them that he is merely a messenger preparing the way for the stronger one. That one will baptize in the Holy Spirit and in fire. The imagery suggests not only the gift of the Spirit at Pentecost, but the refiner’s fire prophesied in Malachi 3:1–5. But what will the fire burn up? Is John saying that some people will be destroyed, and others will be saved? Aleksandr Solzhenitsyn’s perceptive remark about human nature suggests a truer and more difficult answer: “If only it were all so simple! If only there were evil people somewhere insidiously committing evil deeds, and it were necessary only to separate them from the rest of us and destroy them. But the line dividing good and evil cuts through the heart of every human being.” Which one of us can claim truthfully to be all wheat and no chaff? When the stronger one winnows the wheat and burns the chaff, he will sift out and destroy the impurities within every person (cf. Luke 22:31). Like the water of baptism, the promised fire is a gift that cleanses.

George MacDonald, whom C.S. Lewis credited with baptizing his imagination, meditated at length on the idea that God’s love is a consuming fire. He taught that God’s mercy and God’s justice are not opposites, but one and the same: “When we say that God is Love, do we teach men that their fear of Him is groundless? No. As much as they fear will come upon them, possibly far more … The wrath will consume what they call themselves; so that the selves God made shall appear … ” (George MacDonald, Unspoken Sermons).

John calls his hearers to let God burn up our selfish desire to hoard our food and clothes even when our neighbor is hungry and shivering with cold. All that gets in the way of love for God and neighbor must go. Then we can live as God’s own people, aflame with love and committed to justice.

Why We Sing Carols, Psalms and Spiritual Songs

One of the blessings of preaching regularly to the same group of people is the joy of seeing folk journeying in discipleship.
Print All Text Print All Commentary