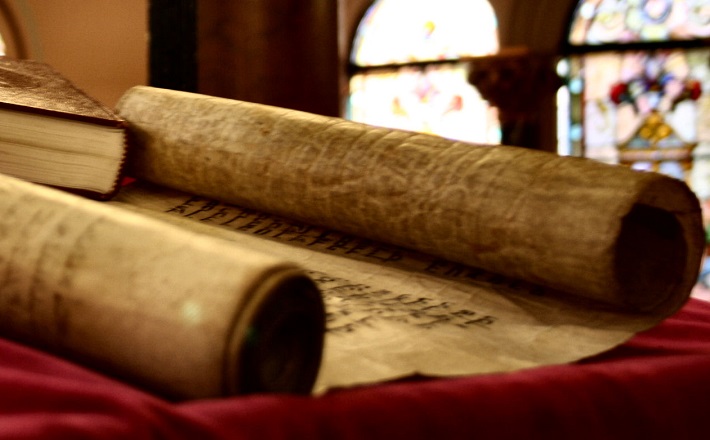 Part annals, part lists, part autobiography, part narration, set partly in the beginning of the return from exile and partly in later generations, the two books (which in Hebrew manuscripts are actually one) seem compiled around the subject of Jerusalem’s reconstitution under new management, not the kings of Judah, but the absentee landlords of Persia.

The two figures Ezra and Nehemiah are both leaders of the Judean community and representatives of the Persian rulers, who sent them to provide spiritual and political leadership for the struggling Jerusalem community. Ezra and Nehemiah rarely appear together, and there is some speculation that they may have been active at differing times. Nehemiah makes only a cameo appearance in verse 9 here, and the singular verb vayomer (“said”) suggests that both he and the Levites may have been added secondarily to a verse in which originally only Ezra spoke (see also the beginning of verse 10).

Ezra first appears in Ezra 7, when he sets out from Babylon to Jerusalem during the reign of Artaxerxes of Persia. He is described as “the priest Ezra, the scribe, a scholar of the text of the commandments of the LORD” (7:11). He is sent with money from the emperor and others for offerings in the temple. He comes to teach the law of the Judean God and of the king. Beginning in verse 27, the story is told by Ezra himself. In Ezra 9, in a scene reminiscent of some of the darker texts of the Pentateuch, he receives the disturbing news that the people have intermarried with the Canaanites, Hittites, Perizzites, and all the other “ites” in the land. His reaction shows how deeply steeped he is in the ancient story he has come to convey.

Fortunately, however, what follows, while drastic and unsettling, is at least not the mass murder usually associated in the Pentateuch with these prior inhabitants of Canaan. The book of Ezra ends with the returned exiles painfully dismissing their foreign wives and children, revealing the depth of concern in this community for maintaining identity and boundaries.

The story then turns to Nehemiah, and Ezra does not reappear again until this chapter, Nehemiah 8. Here we see him in a new role that looks both innovative and strangely familiar: reading and expounding upon Scripture. The passage emphasizes that this occasion includes not just the priests, Levites, or even just the men, but all the people, men and women. It also asserts that Ezra read at the request of the people themselves.

They gather on the first day of the seventh month, which today is Rosh Hashanah (the fall new year), which is followed by Yom Kippur and the Festival of Sukkot, or Booths. They gather not at the temple but at the Water Gate, where all are admitted. The location of this gate is uncertain, but its name suggests proximity to the Gihon spring, Jerusalem’s only natural water source, on the eastern side of the city (cf. Neh 3:26; 12:37). The Babylonian Talmud (Sukkah 4) would later place the Water Gate on the way to the pool of Siloam, and would associate it with a joyous water-drawing ritual during the week of Sukkot (see verses 14-18).

The narrative does not specify which parts of the Torah Ezra read, nor can we know for sure whether it was already in the form that became canonical. In fact, variation between the pentateuchal prescriptions for the festival that follows (Leviticus 23:33-43; Numbers 29:12-38; Deuteronomy 16:13-15) and the festival as described in Nehemiah 8:14-18 may suggest some differences. But more important than the specifics, perhaps, is the practice that Ezra institutes of reading Scripture to others as authoritative directives from God, and interpreting so all understand. The reading evidently continues throughout the week of the festival (verse 18).

For later followers within this tradition, this early glimpse, within Scripture itself, of the faithful reading Scripture, carries a picture-within-a-picture quality. It’s like finding an ancestral village or grave, a marker of the place from which we came, an early precedent for scriptural interpretation. Jesus’ reading from the prophet Isaiah in this week’s Gospel passage echoes Ezra even as it too provides a glimpse of precedent.

The occasion could have been marked by dismay, as it was for King Josiah, when he first heard the words from the law book found in the temple and tore his clothes in mourning, recognizing the nation’s neglect of divine commands and fearing God’s wrath (2 Kings 22:11-13). Instead, however, when the people begin to weep, Ezra and others tell them instead to rejoice, because “this day is holy to the Lord” (verse 9). Rather than fasting, they are told to feast and share their food, because “the joy of the Lord is your strength” (verse 10).

The grammar of this final assertion is intriguing. Translations and commentators disagree over whether it is more properly rendered, “[your] joy in the Lord is your strength,” or “the Lord’s joy is your strength.” Either way, the point of cheerful trust in God is clear. Psalm 19 likewise reflects this position, as the wonders of God’s two great creations, the sky that wordlessly pours forth God’s glory and the Torah that is sweeter than honey, inspire the psalmist’s own grateful commitment.

One October I was visiting an orthodox Jewish friend in New York City. It happened to be the end of the week of Sukkot. Immediately following this week comes Simchat Torah, the “joy of Torah,” which marks the conclusion of the yearly cycle of weekly Torah readings with Deut 33 and 34. The following Sabbath, the reading would begin again with Genesis 1. On this evening of Simchat Torah, life in the orthodox Jewish neighborhood became a street party, as young people vigorously danced out their holy merriment, holding Torah scrolls high over their heads, since being entrusted with guidance from above inspires joyful gratitude.

Luke 4:14-21 is the opening scene in the ministry of Jesus. It is Jesus’ manifesto for the work ahead.

We have a gift in Psalm 19. Bach, Beethoven, Handel, and Haydn expressed their delight with this Psalm through now well-known musical settings of its text.

We often confuse unity with uniformity, because it is much easier to gather with people who are like ourselves than it is to reach across the divisions which mark our culture.
Print All Text Print All Commentary