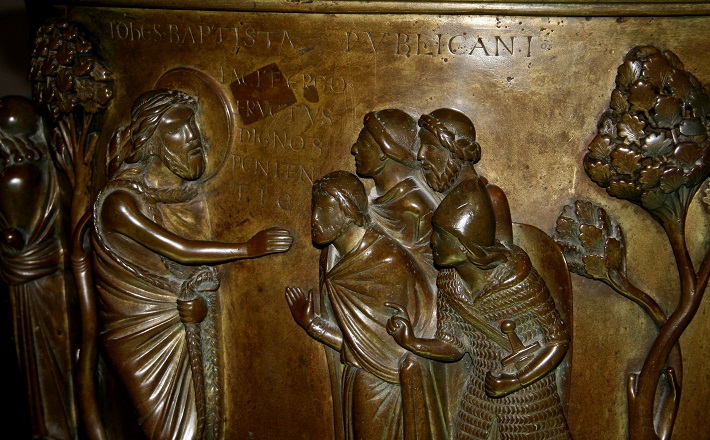 Luke’s litany of imperial, regional, and religious authorities does more than date John’s ministry to 28 or 29 CE. It also contrasts human kingdoms with God’s reign. The claims to authority that Tiberius or Herod or the high priest may make are not ultimate. God’s people owe allegiance first and foremost to God. And it is God’s word that sets John’s ministry in motion. John has been commissioned to prepare the way not for lord Caesar or any earthly lordling, but for the one true Lord.

Like Moses, like the prophetic voice in Isaiah 40, John challenges God’s people to see the wilderness as a place not of desolation, but of hope. God is calling them, like the Babylonian exiles, to leave their captors behind and head home through the wilderness. God is calling them, like the people of Israel in Egypt, to join an exodus out of slavery into God’s promised fresh start (see Luke 9:31, where Jesus discusses his Exodus with Moses and Elijah). John preaches that the first step on this journey toward freedom is a baptism of repentance.

John’s hearers were probably already familiar with two kinds of baptism: the baptism by which Gentile converts became Jews and so embarked on a whole new way of life; and the ritual washings that the Qumran community understood as cleansing them, but only if they turned from their sins and obeyed God. Both types called for changed behavior. John’s baptism of repentance does too. Repentance (Greek metanoia) is not mere regret for past misdeeds. It means far more than saying, “I’m sorry. Please forgive me.” Metanoia means a change of mind and heart, the kind of inner transformation that bears visible fruit. In the Gospel for next Sunday, when the crowds ask him what they need to do, John will spell out precisely the sorts of fruit God expects to see (Luke 3:10–14).

John proclaims a baptism of repentance that leads to release from sins. Release (Greek aphesis) is the same word that Jesus uses twice in Luke 4:18 to describe his mission: “The Spirit of the Lord is upon me, because he has anointed me … to proclaim release to the captives and … to let the oppressed go free … ” The release or forgiveness that follows repentance does not undo past sins, but it does unbind people from them. It opens the way for a life lived in God’s service. By proclaiming such release, John fulfills his father’s prophecy: “you, child, … will go before the Lord to prepare his ways, to give knowledge of salvation to his people by the forgiveness (aphesis) of their sins” (Luke 1:77). This salvation looks like a new dawn for those trapped in darkness and death’s shadow. It is light that reveals a new path, the way toward peace (Luke 1:78–79).

Preparing the Lord’s path toward peace requires overturning the world as we know it. John quotes the prophet Isaiah to describe the earthshaking transformation that must take place. Though his words can certainly be taken as mere pictures of road construction, in the context of Luke’s writings they evoke richer associations: valleys filled full, mountains and hills humbled (tapeinoo), everything crooked made straight and true. Mary sings of the God who has looked on her humble state (tapeinosis). She praises the One who saves by dethroning the powerful and exalting the humble (tapeinous), sending the rich away empty-handed and filling up the hungry (Luke 1:52–53). Jesus blesses the poor and the hungry and the weeping but announces woe for the rich and well-fed (Luke 6:20–26). On the Day of Pentecost Peter warns the people, “Be saved from this crooked generation” (Acts 2:40). ‘Crooked,’ skolia, is the same word that Isaiah uses for the things that must be straightened out. Preparing for God’s arrival means rethinking systems and structures that we see as normal but that God condemns as oppressive and crooked. It means letting God humble everything that is proud and self-satisfied in us, and letting God heal and lift up what is broken and beaten down. The claims that the world’s authorities make often conflict with God’s claims. Paths that seem satisfactory to us are not good enough for God. John calls us to let God’s bulldozers reshape the world’s social systems and the landscape of our own minds and hearts. God’s ways are not our ways.

But God’s ways lead to salvation. God’s glory will be revealed in Jesus, the judge who comes to save us. This is the good news that John proclaims, and it is good news not just for us, but for the whole world: all flesh will see God’s salvation. This is God’s promise, and our hope. Bring on the bulldozers. Let’s prepare the way.