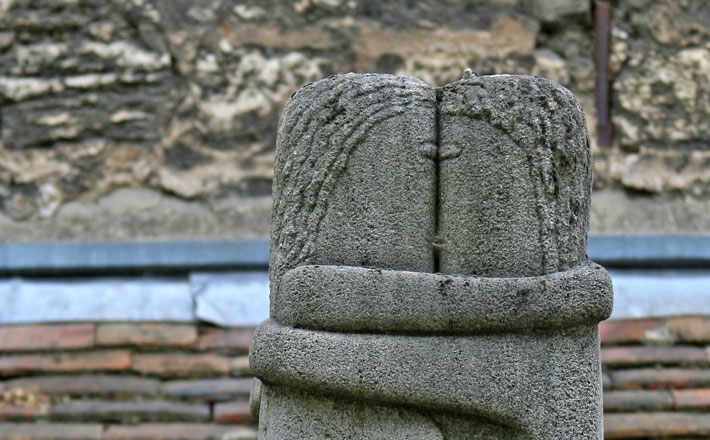 In Series B, the Advent season devotes two consecutive Sundays to the ministry of John the Baptist, presenting back-to-back parallel texts from the Gospels of Mark and John.

The text for Advent 2 introduces us not only to the figure of John the Baptist but also to the Gospel of Mark, from which a majority of Gospel texts will be selected in the coming year. The first verse is probably intended as the title of the book. At this point in history, no one had ever written “a Gospel” before. Mark probably thought he was writing a biography, but when he chose to call his work “the good news (gospel) of Jesus Christ” he gave a name to a new genre of literature.

The book differs from biographies of other heroic individuals in that it does not simply claim to recount the inspiring tale of a noble man. Mark wants to tell us about the beginning of a new era, a time and place in which God has entered human history in an unprecedented way.

It is “the gospel era”: the kingdom of God has dawned. Mark wants us to know that God is ready and willing to rule our lives; he wants us to believe this and to act accordingly (Mark 1:14-15). This book (with which we shall spend so much time over the next year) is going to tell us how this gospel era began: it all started with Jesus Christ, the Son of God, who announced the dawn of God’s rule and sealed the reality of that reign by establishing a covenant through his own blood (14:24).

But first — a preface. Yes, it begins with Jesus, but before Jesus there was John, and before John, there was Isaiah.

In Mark’s Gospel, John the Baptist is basically an Old Testament figure. His clothing is based on descriptions of Elijah in 2 Kings 1:8; in some sense, Mark believes that John is Elijah, who has returned just as Malachi said he would (Mark 9:9-13; cf. Malachi 4:5-6).

But the most important scripture for understanding John is Isaiah 40:1-11, which serves as the first lesson for today. The passage announces God’s intention to visit God’s people. God gives directions for the way to be prepared. By who? By the people God wants to visit? No, by God’s own servants. God does not say, “Tell the people to get ready and when they have done so, I will come to them.” God says, “Prepare the way! I am coming to my people (whether they are ready or not).”

Indeed the voice of God in the Isaiah text has the character of a wounded lover. God is desperate: “I will come to my people, and nothing will keep me from them. Mountains will be torn down, valleys will be filled in, rough places made smooth — whatever it takes!” It is hard not to think of the old Diana Ross song, “Ain’t no mountain high enough”.

So, Mark’s Gospel announces that this plan is, once again, about to be fulfilled. John the Baptist is one of God’s agents preparing the way for the Lord to come. He offers a baptism of repentance as a means of “getting ready.”

That baptism occurs in the Jordan River, famous in the Old Testament as the boundary marker for what came to be called “the Promised Land.” In the exodus story, God’s people wandered in the wilderness for forty years until at last they reached the Jordan River. When they entered these waters, they knew their wandering was over and that God’s promises were about to be fulfilled.

So the basic Advent theme sounded throughout this text is that the time of promise is drawing to a close and the time of fulfillment is drawing near. For Isaiah, the probable context was the end of exile for Israelites in Babylon. For John the Baptist, of course, it was the coming of Israel’s long-awaited Messiah.

The announcement is gracious, with only the dimmest echo of warning. Neither Isaiah, nor John, nor Mark intended to say, “God will come to those who are ready; those who are not, will be left out.” The accent is simply on God’s imminent, certain advent, though such an announcement obviously calls for response.

God is coming to us! This is fantastic news! So, what can we do to get ready? Confess your sins, John suggests. Get baptized. Repent. Later, Jesus will add, “and believe in the good news!” (Mark 1:15).

God will come and fulfill all of God’s promises whether or not we do any of these things — but knowing God is on the way, why wouldn’t we want to do them?

To take a somewhat silly analogy, children play a game called “Hide-and-Seek” in which everyone hides and tries not to get caught, but eventually, when the game goes as it should, everyone gets found. The game is interesting from a psychological point of view because “hiding” is not really very much fun. If you ask most children, “Do you want to sit somewhere all by yourself and keep very quiet for a long time?” you will not get many takers. What’s fun about “Hide-and-Seek” is not hiding, but getting found. Everybody likes to be found.

So, when Advent comes around every year, we are reminded that God is coming to find us. We have our ways of hiding. But on Advent 2, when John the Baptist shouts, “Prepare the way of the Lord!” it is as though God has just called, “Ready or not, here I come!” And we remember: this is the God who always finds us.