As he opens his letters, Paul commonly names others alongside himself. 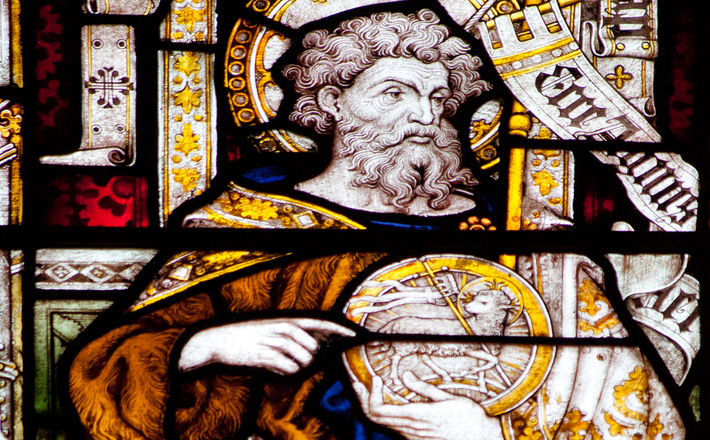 As he opens his letters, Paul commonly names others alongside himself.

Among the undisputed letters of Paul, only Romans does not have a co-author or other senders named. 1 Corinthians begins by naming Paul and Sosthenes as those from whom the letters comes. The only other reference to a Sosthenes in the New Testament is in Acts 18:12-17, where a Jewish leader by that name in Corinth is beaten by a mob in front of the proconsul, Gallio.

There is no evidence one way or the other regarding whether the name, when it appears in Acts, refers to the same person Paul mentions in 1 Corinthians. Even though we do not know the precise identity of Paul’s co-author, it is nonetheless meaningful that he names one. Paul’s letters are community documents, both in their composition and in their reception.

In the context of a community where spiritual gifts have become a way to claim rank and status over others, Paul begins his letter by framing those gifts as part of God’s work in Christ. A thanksgiving is different from a commendation or even a complimentary greeting to those receiving the letter. A thanksgiving is a prayer, and as such, it allows Paul to give credit where credit is due.

The result is a more subtle form of the questions Paul will ask the Corinthians later, “What do you have that you did not receive? And if you received it, why do you boastas if it were not a gift?” (1 Corinthians 4:7). God is the source of their life together and the gifts manifested there and all of it draws them more deeply into fellowship with Christ.

Paul’s thanksgiving also corrects any mistaken impression that the Corinthians have attained the fullness of life in Christ. In the thanksgiving, Paul mentions that the Corinthians are waiting for the revealing of our Lord Jesus Christ and that there is a “day of the Lord” yet in the future. The effect is to relativize the Corinthians’s present experience, however remarkably spiritual it may be for at least some of them.

The body of the letter, with all its reports of conflict and claims to superiority over brothers and sisters in Christ, will confirm that there is still some distance between the state of the Corinthians and God’s intention for them. However much they may aspire to it, they do not yet see the revealing of our Lord Jesus Christ “face to face” (cf. 1 Corinthians 13:12).

It is impossible to come away from this text with the impression of Christian life as an individualized spiritual journey. Paul gives thanks for God’s gifts to the Corinthians as a group and names their community with Christ as the defining characteristic of their life together. What would it be like for those listening to a sermon on this text to understand themselves not so much as blessed individuals but as part of a community that has received gifts of God’s grace?

A sermon on this text could take the form of a thanksgiving to God for the community to which the preacher speaks. Paul certainly knew the Corinthian community was not perfect; in fact, it is as fractious and fractured as any community to which he writes. Yet he finds much to thank God for as he begins a letter to them. As a preacher, what would you thank God for about the people to whom you preach? What might their experience as a community be if they could hear you thanking God for them and their gifts?

Sometimes churches can be a little self-impressed. Our own virtues captivate us: we are friendly, or generous, or working for justice, or impeccable in our attention to the details of worship. Like the Corinthians, we are indeed “enriched” and, let’s face it, impressed by it. Writing to such a community, Paul thanks God first of all for the grace given to these people in Christ Jesus. Paul will soon introduce the reversal implicit in that grace when he says, “I decided to know nothing among you except Jesus Christ and him crucified” (1 Corinthians 2:2).

What does it mean to give thanks for the grace of the Crucified One among a people? At least part of what it means is that God’s power in that particular place is manifest in ways beyond the things people like best about themselves, perhaps even in weakness (cf. 1 Corinthians 1:25 and other occurrences of “weakness” in the Corinthian letters). Without valorizing failure, a sermon on this text might call to mind ways that God is at work in unexpected, often unvalued people and places among us.