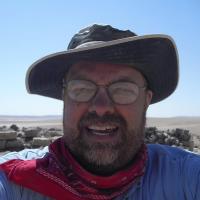 These words encircle the tower of the Castle Church in Wittenberg, Germany. Ironically this is the same church that Martin Luther nailed his ninety-five theses to almost 500 years ago beginning the Protestant Reformation. On one level Psalm 46 speaks of the stronghold of Jerusalem. However, on a higher level it praises God’s protection as being greater that any earthly fortification: “God is our refuge and strength, an ever-present help in trouble (v. 1).” The steadfast protection of God is also in the repeated chorus of verses 7 and 11: “The Lord Almighty is with us; the God of Jacob is our fortress.”

These are words of hope voiced in the midst of surrounding chaos. Though creation falters, earthly strongholds fail, and our world seems to collapse, we are called upon to trust God. The psalmist first describes the collapse of creation around us.

An ancient concept of creation is that chaos surrounds us, ready to collapse upon us at any time. These primordial waters of creation are held back by God. It may seem that we are drowning in the worries around us. Yet, there is no need to fear the powers of chaos since we worship the one who brings order in the midst of chaos, the one who brings life in the midst of despair. While the primordial sea represents chaos, God offers the river that brings life. Reminiscent of Ezekiel 47:1-12, the psalmist speaks of the life giving waters that flow from the Holy of Holies: “There is a river whose streams make glad the city of God, the holy place where the Most High dwells” (Psalm 46:4). Life and civilizations develop around rivers. Even my hometown, Louisville, Kentucky, developed as a portage around the falls of the Ohio River.

The psalmist next describes political turmoil and nations at war: “The nations are in an uproar, the kingdoms totter; he utters his voice, the earth melts.”(Psalm 46:6) Using the image of the desolation of a battlefield in verses 8 and 9, the psalmist describes God as the one who defeats the armies and destroy their ability to make war again: “Come and see what the Lord has done, the desolations he has brought on the earth. He makes wars cease to the ends of the earth. He breaks the bow and shatters the spear; he burns the shields with fire.” Isaiah (2:4) and Micah (4:3) share the vision of weapons of war being turned into tools of peace and of a time where war no longer needs to be studied.

“In repentance and rest is your salvation,
in quietness and trust is your strength,
but you would have none of it.”

Kerak Castle in al Kerak, Jordan is a stronghold built in 1149 CE. Sitting high above the surrounding area it is protected by deep ravines. It was constructed by the Crusaders and later captured by Muslim forces under Saladin in 1189 CE. The castle has changed hands over the centuries and was used as late as World War I. Though the castle has stood all this time, it was damaged by a recent earthquake. The ravines, once a part of its strategic strength, now could be the cause of its destruction as the earth continues to shift underneath its foundation.

Some of our biggest mistakes come when we are tired, under stress, and inattentive. We are not acting out of confidence. Instead we react out of fear. Rudyard Kipling said, “If you can keep your head when all about you are losing theirs and blaming it on you, … Yours is the Earth and everything that’s in it.”1 Matthew puts it another way: “Blessed are those who hunger and thirst for righteousness, for they will be filled.”(Matthew 5:6) Righteousness comes from a right relationship with God, trusting that there is one greater than us; having confidence in God. It is out of this confidence that one can join in the refrain of the psalmist. “The Lord Almighty is with us; the God of Jacob is our fortress.”

Professor of Old Testament and Hebrew

School of Theology at Campbellsville University

Rembrandt’s famous Jeremiah Lamenting the Destruction of Jerusalem captures what most of us picture when we think of the biblical Jeremiah: the prophet, forlorn, painted against a dark background, leans his head on his hand.

Krister Stendahl, a teacher and mentor, worked to “undo” the introspective Lutheran-Augustinian reading of Paul and to read the letters of Paul in their historical context of the first century — Stendahl put Paul back “Among Jews and Gentiles.”
Print All Text Print All Commentary