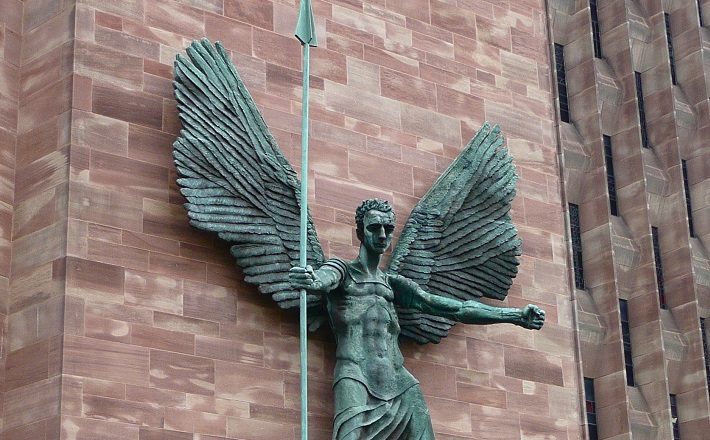 For most contemporary people living in the so-called First World, it is much more difficult to understand the end-of-the-world apocalyptic prophet figure, who distanced himself from family (cf. Mark 3:20-21, 31-35; 6:1-6) and religious institutions. This is the “Jesus” of Mark 13. Apocalypticism means an “unveiling” or “revelation.” Jesus’ opening sermon revealed God’s kingdom: “The time is fulfilled, and the reign of God has come near” (Mark 1:15). Jesus performed exorcisms and considered them to be signs of the presence of the “kingdom” and the beginning of the end (cf. Matthew 12:28; Luke 11:20). In chapter 13, Jesus continued unveiling other signs of the end.

In light of the preceding passage (cf. 12:41-44), the disciple’s reaction (“Wow, look at this grand place!”) seemed really out of place in chapter 13, since such grandeur was built on the “gifts” of poor widows and others, which Jesus carefully analyzed. Other disciples — since the first one was unnamed — will be more inquisitive privately wondering about the timing of Jesus’ predictions.

In this chapter, Jesus predicted the destruction of the temple, the center of religious life. When compared to Jesus’ public, symbolic action in Mark 11, his words here take on an ominous tone, similar to the prophet Jeremiah’s tone (cf. Jeremiah 7).

As clear as Jesus was about a final devastation, he was more ambiguous about the timing of the event(s). He pointed to a period when a number of people will “come in my name” and claim special authority (“I’m the one!”); later in the chapter, Jesus stated more directly that many false Messiahs and prophets will appear (Mark 13:22). Jesus’ “name” took on a significant authority during this period (probably the later period in which Mark wrote). For example, others had performed exorcisms in Jesus’ “name,” but Jesus did not hinder them despite his disciples’ desire (cf. 9:38-39). How could non-followers have access to this kind of authority and power as well? A later Markan tradition will point to the disciples carrying out this same kind of exorcizing activity in Jesus’ name (cf. 16:17).

Private conversations in the Gospel

A few of the (named) disciples curiously asked about the timing of Jesus’ prediction. Legitimately, the disciples wonder when the destruction of the Temple might occur, providing one more example that they themselves did not interpret Jesus’ earlier action (in Mark 11) as representing the obliteration of the sacred religious center. Why was the time-table of the end a “private” matter? Could a public conversation about the Temple have been misinterpreted as an act of rebellion? It seems so (see 14:58).

Throughout Mark, Jesus reserved some of his most essential teaching for private moments with the disciples. Jesus explained the parables to them privately (4:34; cf. 4:10-12). He took Peter, James, and John alone to a high mountain and revealed his transfigured self to them (9:2-8). Privately, the disciples asked Jesus why they couldn’t cast out a demon in a specific case (9:28). In chapter 13, the disciples — Peter, James, John, and Andrew — ask about the timing of the telos (or, “end”; 13:3); three of these four also witnessed the physical metamorphosis of Jesus (cf. 9:2-8).

In response to this private inquiry, the teacher offered his predictions about other “signs” that will signal the end — including the “desolating sacrilege” (13:14) — but claimed not to know the actual “time” of the end. Jesus claimed that this knowledge was reserved only for God (13:32). Mark’s apocalyptic prophet did not claim to know it all!

Do we ever witness the apocalyptic Jesus elsewhere in Mark’s Gospel? Direct teaching on the end of the world was rare and seems somewhat incompatible with the remainder of the Gospel story. There were, however, a few clues earlier in the story. At one point, he announced that “Satan” (ho Satanas) would come to an “end” (telos; 3:26). As mentioned earlier, some scholars view his exorcizing activity as representative actions signifying the reality of the basileia (“kingdom”) as the beginning of the end. Jesus’ own sense of the end may also explain his symbolic actions at the Temple (cf. 11:15-17), believing in the renewal of the Jerusalem Temple as a sign of the end (cf. 15:29).

Today, we tend to view, rightfully, “street-corner preachers” who concentrate their words heavily on end-time affairs with skeptical eyes. Whether it is because their predictions tilt toward precise descriptions (and, are easily misguided) or their rhetoric leans toward anti-social behavior except for those who agree with their efforts. The “Jesus” of the first century shared some of these qualities, so it’s important to feel that awkward tension occasionally even with the Jesus of the Gospels. The difference between the two is worth reflecting on in church communities today. At least, Jesus recognized his own limitations (cf. 13:32). And, his end-time predictions, in chapter 13, were apparently reserved for his closet followers.

Despite the global disasters that surround us — some instigated by First World policies — we’d rather think about a messianic figure who has already arrived and called on us to be kind to our neighbors. But, occasionally, it may be an important reminder to hear an ancient prophet cry out about the fragile nature of the world. Perhaps we’ll appreciate our world more and care for it with a sensitivity it deserves. As Mark offered as a side-note comment, so I close with hope, “Let the reader understand” (13:14)!