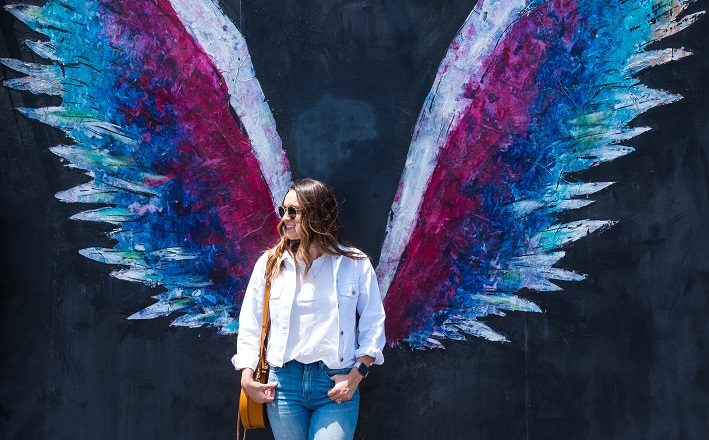 Do not neglect to show hospitality to strangers, for by doing that some have entertained angels without knowing it. Photo by Daniel Salcius on Unsplash; licensed under CC0.
September 1, 2019

Wisdom psalms differ from more familiar psalms in their instruction on the qualities of living a life of righteousness before God rather than one of wickedness. They also are void of any praise or lament addressed to God.1 An example of this is the contrast between Psalm 112 Psalm 111, which many scholars agree should be paired together. Although both psalms share the pattern of an acrostic poem, with every other verse beginning with a letter of the Hebrew alphabet, common language, and a common theme of the virtues of godly living, the former stresses the wisdom of the individual who delights in living according to these instructions while the latter is a thanksgiving psalm in praise of God who is the author of these virtues.

The righteous are happy

Psalm 112, just as Psalm 111, opens with the command to “praise the Lord” or “hallelujah.” The next stanza in Psalm 112:1 contains a formal introduction that consists of a blessing upon the righteous. They are declared happy or blessed (Heb. ’ashre) for their uprightness, which is counted as fear of the Lord. The reference to fearing the Lord is directly associated with wisdom (see Psalm 111:10; Proverbs 9:10). Of course, the reader understands this blessedness to mean both obedience to and taking delight in the Lord’s commandments (112:1). More specifically, the godly are blessed because their living conforms to God’s character as described in Psalm 111.

The New Revised and New International Versions among others use the gender inclusive plural pronoun “those” to emphasize that the righteous are both female and male even though the Hebrew text has the masculine singular noun “man” as in “happy is the man” as the subject. Although the text reflects the primarily male patrons of wisdom literature in ancient times, one should not lose sight of the fact that wisdom is personified as a woman, especially as a righteous figure. Thus, we should expect that every man, woman, boy, and girl to live according to God’s righteousness.

The psalmist proclaims that not only are the righteous blessed with might, abundant wealth, and residences of their own, but such graciousness extends also to their descendants (112:2–3). With righteousness comes the responsibility to serve as a light in the darkness to others who live uprightly. The godly also show grace, mercy, and compassion towards one another (112:4). These are attributes of God (see Psalm 111:3–4). The lessons here would resonate with the literature of the other wisdom traditions.

When preparing to preach Psalm 112, one should not be quick to take it to mean that God supports prosperity gospel theology. Prosperity gospel, or the health-and-wealth gospel, preaches that God rewards adherents with wealth according to their faithfulness. Unfortunately, the other side of this teaching is that if you are poor then you are not faithful enough. Read out of context, it would be easy to see how one might conclude from these few verses that God has blessed the righteous with material blessings and good health because they were faithful. However, if we read verse 4 more closely, we find that there is more to virtuous living than being on the receiving end of God’s benefits. The shadow of darkness looms in the background. One possible interpretation is that although their righteousness—their fear of God and delight in God’s commandments—endures forever (112:3), the godly are not without adversity in their lives.

The righteous are just

As the psalmist continues to affirm that the moral character of the righteous reflects the character of God, they are also described as being generous with whatever resources that they possess and practicing justice in their affairs in the courts (112:5). Put another way, they share their blessings and they don’t cheat people. The psalmist states that the righteous stand firm in their positions and thus, they will be remembered forever (112:6). What was inferred in verse 4 is made plain in verse 7. The righteous are not immune from trouble. The psalmist declares that they are able to steel themselves in the face of bad news because they trust in the Lord. Surely, they must have been on the receiving end of bad reports or gossip of such news or the psalmist would not have mentioned them. However, instead of faltering underneath the negative hearsay, their hearts are strong. Moreover, not only will they show courage in the times of trials, but they will also triumph over their enemies (112:8).

The righteous are wise

The true character of godliness according to the psalmist in verse 9, read with verse 3, is living in right relationship with God at all times: “their righteousness endures forever” (NRSV). The righteous are gracious, compassionate, and enjoy power and wealth to the benefit of the poor and disenfranchised, not to lord it over them. Thus, while the righteous walk in the light the wicked are enveloped in darkness. The wicked envy the righteous, but their desires shall come to futility (112:10). Together the characteristics of the righteous do not align with prosperity gospel theology. Wicked people sometimes prosper, and the pious can encounter unmerited suffering. The righteous are wise enough to know that to truly be happy is to practice living according to God’s commandments whether or not they receive material benefits.

It would be tempting to overlook this mere two-verse reading from Proverbs in the lectionary, or simply to read it as an echo of Jesus’ counsel in the gospel lesson for the day in Luke 14.

This week’s lection picks up directly from last week’s reading and offers a jarring tonal shift.
Print All Text Print All Commentary