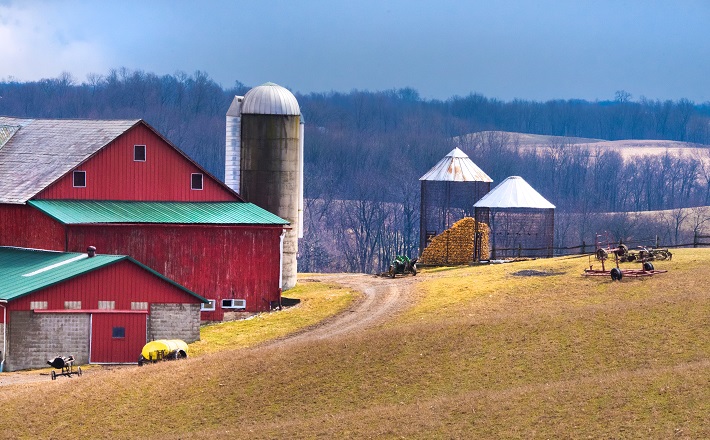 "I will pull down my barns and build larger ones, and there I will store all my grain and my goods."Photo by Randy Fath on Unsplash; licensed under CC0.
August 4, 2019

It offers a fresh take on the sometimes-stale metaphor of God as parent, and it daringly explores the possibility of divine emotion and even pain. There is much here for the preacher to chew on.

Metaphors for God and humans

So, it’s no surprise that Hosea 11 uses metaphor to depict the divine-human relationship. It begins with familial imagery, with God as the parent and Israel as the beloved child whom God rescued from slavery in Egypt (verse 1). The poem describes God’s care for Israel in verses3–4 with tender language (“loved him,” “took them up in my arms,” “bent down to them,” “lifted to the cheeks”). In settings in which such actions are stereotypically associated with mothers, these verses offer implicit feminine imagery for God (compare Isaiah 66:13). Yet Israel’s response to this devotion is rebellion. Rather than acknowledging their divine parent, they worship other deities like the foreign storm god Baal (Hosea 11:2). God’s threatened response of abandonment and violent reprisal seems harsh (verses 5-7), but within the world of the metaphor, it is born of the deep pain of a rejected parent, who can only watch helplessly as the child makes poor choices that will ultimately harm them. In a contemporary context, one thinks of parents whose children struggle with addiction. They often face a difficult choice between unconditional but perhaps enabling acceptance, or tough love and firm ultimatums that might encourage the child to seek help.

Following God’s decision to forgive Israel (verses 8-9), the imagery takes an unexpected foray into the animal world. Although still a parent, God becomes a lion who summons its errant cubs by roaring for them (verse 10). This is one of the only cases in the Bible where lion imagery for God has positive connotations (contrast Hosea 13:7-8). Elsewhere, the lion’s roar evokes terror (see Amos 3:8), and even here the roar causes the lion’s children to “tremble.” A final metaphorical shift occurs in Hosea 11:11, as the Israelites are transformed from trembling lion cubs to trembling doves, emphasizing their vulnerability. Although these animal metaphors are less personal, they convey the deep gulf between divine power and human frailty. Like Aslan in C. S. Lewis’s Narnia novels, God the parent-lion in Hosea 11 can be merciful and compassionate, yet remain fearsome and dangerous.

Some recent theologians have argued that all language about God is metaphorical, but no single metaphor can adequately describe God. As a result, one should use a variety of different images to capture something of the complexity of God’s nature. Hosea 11 supports these insights. Its metaphors offer multiple perspectives from which to consider God’s relationship with God’s people. At the same time, verse 9 asserts the fundamental difference between the divine and human realms: “I am God and no mortal.” This statement relativizes the very metaphors on which the poem depends for its portrayal of divinity. And yet, following this verse, the poem returns to metaphorical language, suggesting that for all of its limitations, such language remains an important tool for imagining the God who ultimately transcends comprehension. Hosea 11 calls us to reflect upon our own metaphors for God, to identify their value, their limitations, and even dangers, while acknowledging the inadequacy of all human categories for thinking about God.

Hosea 11 also paints a complex picture of God by giving voice to a remarkable divine confession in verses 8-9. Despite the pain of rejection, God admits feeling internal turmoil at the thought of disowning God’s children: “My heart recoils within me / my compassion grows warm and tender” (verse 8). This is no aloof, detached deity. Rather, God’s relationship with humankind involves emotional risk. The choice to love is the choice to open oneself to pain. Despite the very real dangers of Hosea’s familial imagery for God, it is a powerful tool for expressing this shocking divine vulnerability.

These verses depict a tension between divine anger and divine compassion, which the English poet John Milton would much later describe as “the strife / Of Mercy and Justice in [God’s] face discern’d” (Paradise Lost, 3.406-7). This tension is a consistent characteristic of the God of the Bible. An oft-repeated theological statement in the Hebrew Bible describes God as “slow to anger, and abounding in steadfast love and faithfulness … forgiving iniquity and transgression and sin, yet by no means clearing the guilty” (Exodus 34:6; see Numbers 14:18-19; Jeremiah 32:18; Nahum 1:3; etc.). These dueling tendencies are associated with the very name of God–that is, they are fundamental to God’s identity.

While acknowledging the same tension, Hosea refuses to leave it unresolved. Compassion wins out in verse 9. It is the triumph of mercy over justice (see James 2:13) that is fundamental to God’s identity, not the tension between these attributes. God can choose “not [to] exercise my fierce anger” precisely because God “is God and no mortal, the Holy One in your midst” (Hosea 11:9; compare Isaiah 54:7-8). Although the threat of judgment returns in subsequent chapters in Hosea, God’s compassion has the final word in the book (Hosea 14:1-8). Too often, contemporary Christians accept the false and unhelpful dichotomy between the “Old Testament” God of wrath and the “New Testament” God of love. Hosea 11 offers a more compelling portrait of a divine tension that gradually but decisively resolves itself on the side of mercy.

Many who hear this parable, especially in a North American context, may wonder: Why is the rich farmer called a fool?1

I love “ordinary time” on the Christian calendar.

The last in a four-part series on Colossians, this passage gives practical counsel on how to enact the letter’s theological themes in everyday life.
Print All Text Print All Commentary