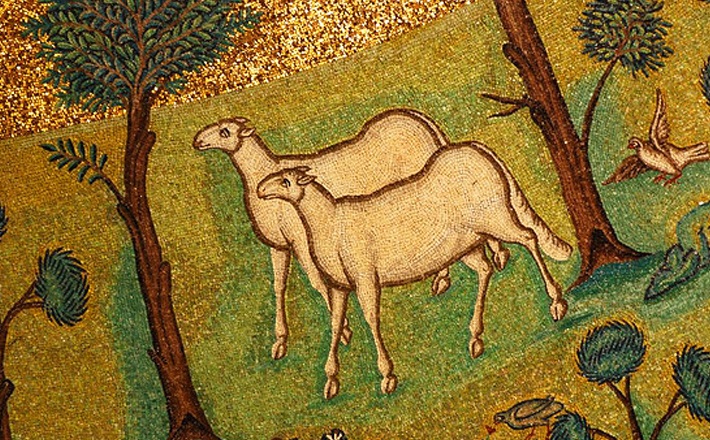 While David’s offer to build Yahweh a house or a temple was rejected, Yahweh promised to build David a house, that is, an everlasting dynasty. Davidic kings ruled in Jerusalem for more than four centuries, ending with the exiling of Zedekiah in 586 BCE. But already before the end of the physical kingship, biblical writers concluded that God would keep the promise to David in the promise of the coming messiah, and Christians concluded that the promise of messiah was fulfilled in the life, death, and resurrection of Jesus, whose title Christ is the Greek translation of the Hebrew word messiah. So 2 Samuel 7 is the real basis for the messianic hope.

The first seventeen verses of 2 Samuel 7 are commonly called the oracle of Nathan, while vv. 18-29 are David’s prayer in response to that oracle. The oracle of Nathan ends with v. 14a in the Revised Common Lectionary, presumably because vv. 14b-15 note that God will punish David and his descendants who sin with blows delivered by a foreign enemy, but the Davidic dynasty will not come to an end in the way Saul’s potential dynasty ended. This open-ended guarantee to all the kings despite their behavior does have potential theological problems.

It is not clear in the Oracle of Nathan why David is prohibited from building the temple. In fact, Nathan’s initial reaction to the proposal is quite positive: “Go, do all that you have in mind; for the LORD is with you” (v. 3). It is only after the word of the LORD came to Nathan at night, that the prophet changed his mind. God seems to have two objections to the proposal. The first objection is to the idea of the temple as a permanent structure. From the time of the Exodus God had contented Godself with living in a tent or tabernacle, and God had never asked the tribal leaders (v. 7) to build a temple. The parallel passage in 1 Chronicles 17:6 states that God had never asked one of the judges to build a temple. The words for tribal leaders and judges are quite similar in Hebrew. To some in Israel building a temple may have been seen to be an attempt to control God or to limit God’s freedom. Even the proposal to rebuild the temple after the exile is met with this rhetorical question: “Heaven is my throne and the earth is my footstool; what is the house that you would build for me” (Isaiah 66:1)? There is also the problem that a temple built by a king might lead the temple establishment to endorse all the king’s policies, in an unhealthy mixture of church and state. That danger becomes clear in the northern kingdom when Amos is rebuked by the king’s priest Amaziah (Amos 7:10-17). Congregations who put too much value on their church building may have an “edifice complex.”

But the second objection is to David’s role in building a temple: “Are you the one to build me a house to live in (2 Samuel 7:6)? That too is surprising since Samuel had anointed David to be king, and the southern and northern tribes had anointed him as king in in 2 Samuel 2 and 5. Solomon addressed the question of why David could not build the temple in 1 Kings 5:3-5, suggesting that David was too busy to build a temple because of his many wars. The book of Chronicles builds on that suggestion by stating that David had shed too much blood in his wars (1 Chronicles 22:8 and 28:3). Solomon on the other hand was a man of peace to whom God had given rest from all his enemies (1 Chronicles 22:9). The oracle of Nathan too suggests that David’s son Solomon would build the temple (2 Samuel 7:13).

Scholars who note the conflicting themes in 2 Samuel 7 often suggest that this chapter has gone through several editions. However that may be, the chapter in its final form concludes quite clearly on the unbreakable promise to David as the basis for the long Davidic kingship and the messianic hope, and that focus leads easily to Christian proclamation.

The New Testament and we contemporary Christians proclaim Jesus as the fulfillment of the messianic hope. But the fulfillments of God’s promises are often better than the original promises themselves. Paul states, “We preach the messiah crucified” (1 Corinthians 1:23), which has become the central theme in the Christian appropriation of this passage. But the death of the messiah is never mentioned in the Old Testament. Christians also recognize the deity of this Christ-messiah, again a motif not mentioned in the Old Testament. Old Testament writers also expected that the coming of the messiah would lead to justice and the total transformation of the society. Christians often speak of already and not yet. The full transformation of society will come with the second coming of Christ. But the Old Testament expectation should encourage Christians to seek peace and just already here and now.